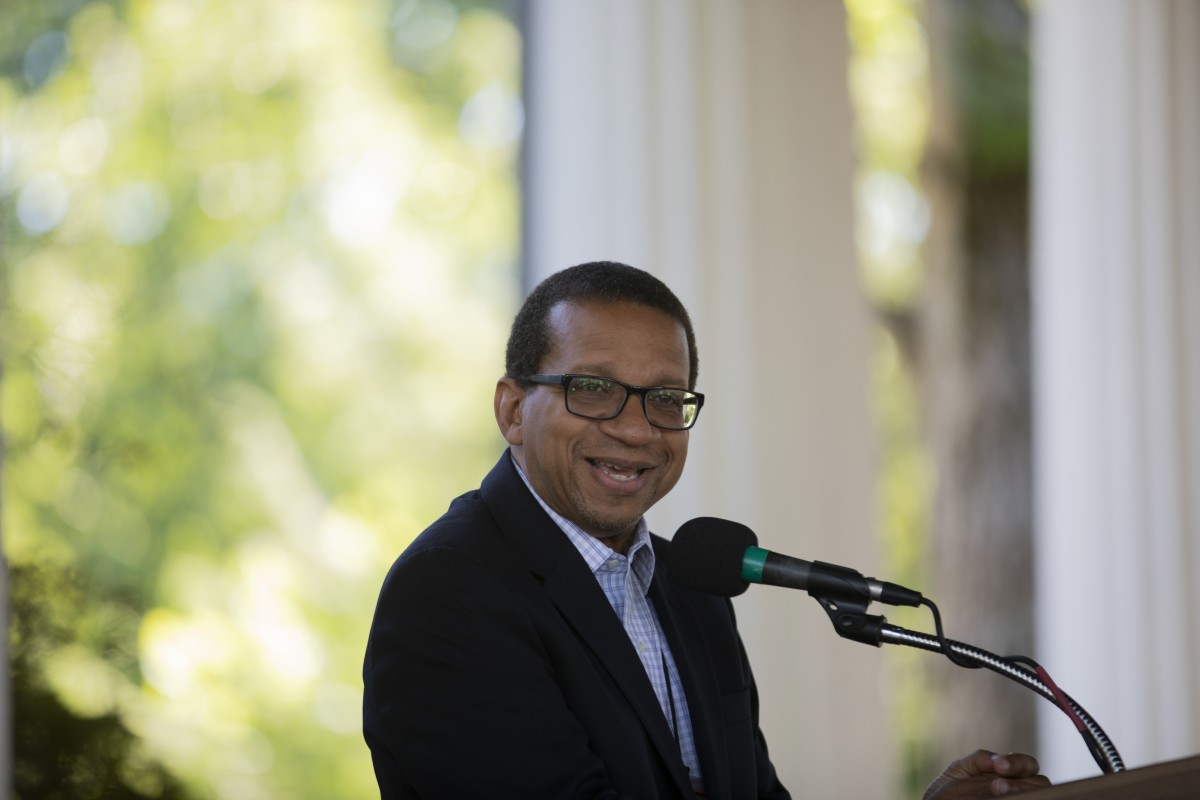 No matter how hard we try, none of us is an absolute original,” the Rev. David Goatley told the congregation at the 9:15 a.m. Friday morning worship service in the Amphitheater.

His sermon title was “To Be Like Jesus,” and his Scripture text was Luke 15:1-7, the parable of the lost sheep.

“Some of us try hard to show our distinguishing features,” he said. “Intentionally or not, we are all like someone else.”

Goatley said he and his wife, Pamela, had been thrilled all week with the dancers and musicians and actors, “but they had all taken their cue from someone else” — a coach, a mentor, or someone who was an inspiration.

“When I was a child, people said to me, ‘You look just like your mother.’ When I became an adult, people would say, ‘You remind me of your father,’ ” he said. “Wherever you are in life, my hope for you is that you will be like Jesus.”

The first way to be like Jesus, he said, is to be caring.

When he was a teenager, Goatley worked one day in a tobacco field. He pulled plants all day, and at the end of the day, his hands hurt; they were red and painful.

He asked the farmer how people could do this all day.

“People build up calluses so their hands won’t hurt,” the farmer replied.

“It is tragic when we allow life to make us callous,” Goatley said. “People build calluses around their hearts and become hard-hearted to the suffering of other people. How sad to have callused hearts.”

The shepherd in Jesus’ parable had 99 sheep who were safe but one was missing. Some people, he said, would ask, “Only one?” But every sheep had value, and the shepherd had the compassion to respond.

The second way to be like Jesus is to be seeking, Goatley said.

“Each individual sheep had value, and that value added to the value of the whole flock,” he said.

When he learned to drive, Goatley said he kept coming home later and later. His mother finally told him that she could not sleep until everyone was accounted for.

“The flock was not complete, and the shepherd did what was necessary to find the lost sheep,” Goatley said. “He did not do it when it was convenient, or when he found the time, or just put in a good effort. He did it because the one sheep had value.”

The third way to be like Jesus is to rejoice.

“Do you know some people who say they love the Lord but never smile?” he asked. “Jesus must have said things that were zingers in times of fellowship, food and rejoicing.”

The shepherd did not berate the sheep after it was found, Goatley said.

“He did not say, ‘You stupid sheep, you dumb sheep, look how you inconvenienced me,’ ” Goatley said.

The shepherd orchestrated a party for the sheep. There was no gossiping, no blaming, no putting the sheep on display and saying, “See what happens when you get out of line.” The shepherd rejoiced, for the lost had been found.

“Strive to be caring, strive to seek the lost, strive to rejoice when the lost are found,” Goatley said. “As the spiritual says, ‘Lord, I want to be like Jesus in my heart.’ Amen.”

The Rev. George Wirth presided. Eszter Kucsinka, a scholarship student with the International Order of the King’s Daughters and Sons, read the Scripture in English and Hungarian. She is a third-year student at the Ferenc Rakoczi II Transcarpathian Hungarian Institute, where she studies English language and literature. Jared Jacobsen, organist and coordinator of worship and sacred music, directed the Motet Choir in singing “Heaven Arise in My Soul”, by David Lantz III. Mary Ellen Kimble, Kathleen Riley and Patti Piper served as soloists. The Lois Raynow Fund for the Department of Religion and the Harold F. Reed Sr. Memorial Chaplaincy provided support for this week’s services.