For Taína Caragol, portraits are skylights to history.

“I love portraiture because of the window it provides into humanity,”Caragol said. “It is an art form that fosters connection, and it is striking when that connection can bridge different time periods, cultures or economic circumstances.” 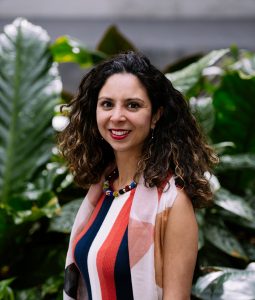 Caragol, curator of painting and sculpture and Latino art and history at the National Portrait Gallery, will speak at 10:45 a.m. Monday, July 2 in the Amphitheater.

She will kickstart the morning lectures during Week Two, “American Identity,” by discussing American history and selfhood from the perspective of the National Portrait Gallery, which is located in the nation’s capital.

Matt Ewalt, chief of staff at Chautauqua Institution and responsible for the lecture platform, said the topic of American identity is at the heart of the country’s dialogue, both on a national and community level. He said Caragol’s perspective from the museum will give Chautauquans a framework for considering how identity has shaped the “American story we tell the world.”

“For the millions of visitors to this national institution, from international tourists to local school children, whose faces are telling the American story? And whose faces are missing?” Ewalt said. “(Caragol’s) work as curator at the National Portrait Gallery is confronting that very issue, addressing in particular the contributions of Latinos to American history.”

As a curator, Caragol researches and organizes exhibits, frequently uncovering new portraits for the museum’s acquisition. She is also charged with caring for the pieces in the museum’s collections.

As a specialist in U.S. Latino and Latin-American art, she gears many of her exhibits and acquisitions toward representing the historic contributions of Latinos to the country and its art landscape.

“Museums are the repository of our collective memory, achievements and aspirations. History museums function, in a way, as a mirror through which we can look back at ourselves.”

Caragol said sometimes viewers recognize themselves in this reflection, and other times they do not.

“But most often we come out with a better understanding of the grander arc of history, its turning points and the moments that have fostered the greater good, or disjunction and strife,” she said. “That, in turn, can illuminate our understanding of the present and provide clues for action.”

Caragol pointed to a video she curated, “Home” by Vincent Valdez, as a piece that stands out in her mind. Valdez was one of six artists in the National Portrait Gallery’s exhibition, “The Face of Battle: Americans at War, 9/11 to Now,” that explored artistic responses to American warfare since 2001.

Caragol said “Home” was a work Valdez made as a process of mourning his friend, 2nd Lt. John R. Holt, who took his own life after returning from Iraq with post-traumatic stress disorder.

“This video was a powerful portrait that honored his friend and his decision to serve,” Caragol said. “Valdez’s grief of losing a friend was expressed through the visuals of their common working-class neighborhood, but also through the soundtrack of The Pogues’ anti-war song, ‘And the Band Played Waltzing Matilda.’ ”

“Home” depicted the southside of San Antonio, Texas, the place of origin in Valdez and Holt’s friendship. With images of a taco joint, flamenco school and carnicería (meat market), “Home” served as a personal farewell to a friend and an homage to the Tejano and Latino experience, Caragol said; even with these expressions of intimacy and culture, “Home” was “profoundly universal.”

“Anyone, regardless of their background, could watch it and feel the pride and pain it conveyed,” she said. “It became a sight of pilgrimage in the show. People kept coming over and over to watch it.”

As an art form, portraiture focuses on individuals. Caragol said it therefore provides a window to the characters, motivations and lives of the very people who shape history.

“I would like for people to carry away the fact that just as history is not static or one-sided, identity is fluid,” Caragol said. “The National Portrait Gallery strives to present American history in all its complexity, and to convey American identity as something evolving and enriched by the many cultures that coexist in this country. Art can help us understand history, our common values and how, as a country, our ideas and attitudes continue to evolve.”

Chamberfest Cleveland to bring audience ‘Behind Bars’ in Lenna program