The main event was the counselor relays, and the competition got everyone on their feet. The anticipation was high and fans could feel it in the air. This was the most competitive event of the day, and it did not disappoint.

The sailing instructors’ first leg was Will Borup, and he wasn’t fazed by the false start and was second to hand off his baton.

But once John Kelly got the baton, he erupted; he took over first place and didn’t look back. Then Billy Benson did the third leg, extended the lead and passed it to the closer, Thomas Kelly.

Thomas Kelly received the baton and left no chance of a comeback, blowing out the competition by three seconds or more.

“It wasn’t close this year at all,” Thomas Kelly said. “This year we had new talent, Borup and Benson, who no one expected.”

The sailing instructors already have plans for next year’s relay.

“All the guys here, they should be returning, and it looks like another win for us next year.” Thomas Kelly said.

Club counselors are prepared for the upcoming light-hearted trash talk from the sailing counselors until they compete against each other again next season.

“I think they deserve it. They were really quick.” said Lydia Wells, a 6G counselor at Club.

Jack Rosenberg, Club counselor for 4B, said he was “ready for the trash talk.” Rosenberg’s team came in third, an improvement from their last-place finish last year.

It wasn’t all about the counselors. The Clubbers also were competitive and had tons of fun.

Tate Ritacco, 5B, won the baseball throw and the 50-yard dash and wasn’t surprised at all by it.

“I expected to win two events. I don’t play baseball, but I throw with my brother,” Tate said. “I think I get it from my dad; he’s really good at baseball.”

Also on the Clubber side was Ellie Rappole, a SAC girl who already has a Club record in the 220-yard dash. This year, she was out to break it.

Ellie didn’t even prepare for the races today and ended up winning the 220-yard dash and 4×4 relays.

On the topic of soccer, Tate suggested there should be a new event.

“I would like to see a soccer kick, who could kick it the furthest,” he said.

The goal of the day was fun, and that was definitely accomplished during Wednesday’s events.

“It’s a great chance to show a bunch of encouragement to your boys. You’re spreading positivity as they do their events. Cheering them on and encouraging them to do their best, but showing them that the important thing is that they have a great time.” 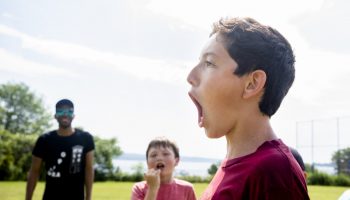