The Chautauqua All-Stars v. Jamestown Jammers wasn’t a blowout like most expected on Tuesday, July 10.

The Jamestown Jammers is a collegiate team made up of players from all different schools. The Jammers are the defending 2017 Western Division Champions in the Perfect Game Collegiate Baseball League. The team is currently No. 1 in PGCBL standings. Tuesday’s match-up with the All-Stars was part of this week’s CHQ Olympics.

The Jammers were used to fast pitches, and the team had to adjust to the slow pitches of Chautauqua softball.

“Going from seeing straight pitches to pitches floating in the air will be tough,” said Brandon Nania, an infielder for the Jammers. The All-Star team was made up of Chautauqua softball players who were selected to play in this game.

“It’s a little bit of a different game then they are used to,” said Paul Ritacco II, All-Stars player. “They are young, athletic and adjust quickly; they’ll be fine.”

Despite the Jammers’ seeming advantage, Nania may have been the only one expecting a close game.

“I’ll give them close competition, but hopefully we blow them out,” he said.

The exhibition game was a close game throughout, with the Jammers winning 15-7. The game was only five innings.

To start out the game, Jammers made quick base hits and excellent base runs to score five times. But the All-Stars weren’t fazed, and answered back themselves with five runs.

Going into the top of the second with the score tied at 5-5, the All-Stars had great fielding and held the Jammers scoreless. Both teams had solid defense and held each other to zero runs.

In the bottom of the fourth inning, the All-Stars got two runs to score. But it was all but over at that point, with the score being 10-7. The Jammers got up to hit to lead off the top of the fifth inning.

The Jammers got a base hit barrage and loaded the bases numerous times. The score ballooned to 15-7, where it would stay.

This game wasn’t all about competition, however. After the fifth inning, the Jammers stayed longer and let members of the crowd come take a swing and try to score against them.

“I’d love to do this again, and meeting everyone was cool,” said Austin Parent, the Jammers’ catcher. “The game was fun and (so was) winning, of course.”

“I would love for this to be an annual thing,” he said. “(The Jammers) are very talented and nice guys.” 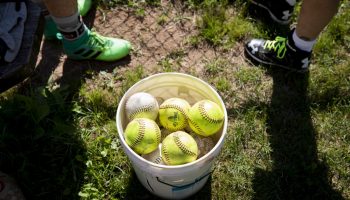