The Chautauqua softball leagues are bringing old and new friends together for another year of softball as the men’s season kicked off last Friday, June 29, at Sharpe Field.

This season began with a doubleheader, Slugs v. Derogatory and Pounders v. Arthritics.

Derogatory is a new team this year, and its members are from the Athenaeum Hotel. The team name came from the guys not being able to pick an appropriate one.

“We decided to umbrella everything as ‘derogatory’ because we’re mostly young guys who, typically in leagues, are seen by some of the older guys as cocky or as being derogatory, when in reality, we’re just out to have a good time this summer, playing against everyone,” said team captain Pat Mogenhan, who was actually unable to play in the first game due to his work schedule.

In fact, as of game time, Derogatory was still going by its original name of the Bellhops. The name change occurred after the season opener.

“We’re a bunch of guys who played baseball growing up, and we thought it would be a fun league to compete in a couple times a week,” Mogenhan said.

Derogatory also had a new starting pitcher, Shelly Klinek, the only woman playing in both the women’s and men’s softball leagues.

“I felt mad that we lost in the last inning. I gave up too many walks late in the game,” Klinek said. “But I enjoyed playing with the young guys. I definitely had fun and tremendously enjoyed it.”

Derogatory started out hot, going up 4-0 after the first inning. But ultimately, the team fell to the Slugs with a final score of 15-12.

“(The Slugs) specialize in come-from-behind victories, so what they did tonight was no surprise,” said Mark Altschuler, men’s league commissioner. “No panic when they fell behind, they just know how to chip away.”

Altschuler is excited for the season, as the men’s league has six teams this summer compared to four last year.

“More teams makes for a healthier league,” he said.

The second leg of the doubleheader had less scoring but no shortage of action.

The Pounders were a favorite in the match-up against the Arthritics, but had trouble putting up runs. The team still squeaked by with a 6-5 win.

“I think our team can ship into shape and start hitting some balls better,” said Dylan Graziano, a third-year player for the Pounders. “But it was a good day to shake off the jitters and start the season off.”

An unusual moment happened in the bottom of the sixth inning when two Pounders hitters got back-to-back home runs, but were called out because the balls went over the 12-foot green fence that protects kids in the adjacent park.

The Arthritics were down the whole game and couldn’t get on the board. Held scoreless until the fourth inning, the team got a spark from an unlikely source: hitting last on depth chart Donovan “Big Papi” Conaway of the Daily.

“He hit two beautiful line drives, down the right field line and drove in a run,” Altschuler said. “We weren’t hitting until Donovan drove in a run and opened up the game for us, and we came back and competed.”

Conaway led the charge going into the top of the sixth inning.

“I was very nervous, but luckily we tightened up some defense to close out the game,” Graziano said.

Usually the “most valuable player” is someone on the winning team, but at Friday’s game almost everyone knew it was Conaway. Conaway was the designated hitter and didn’t disappoint, going 2-2, one RBI.

“Donovan hasn’t played much softball; it is not his sport,” Altschuler said. “(Him) coming out playing that well was really thrilling for me, but I don’t know about MVP.”

Softball fans couldn’t ask for much more, after having two close and competitive games to lead off the season.

Editor’s note: While Daily reporters are typically encouraged to act as storytellers, rather than story subjects, we are thrilled to congratulate Donovan “Big Papi” Conaway on his first-ever softball game. 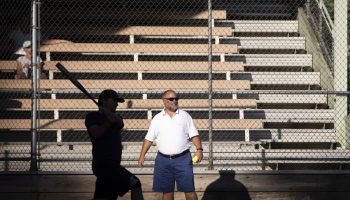