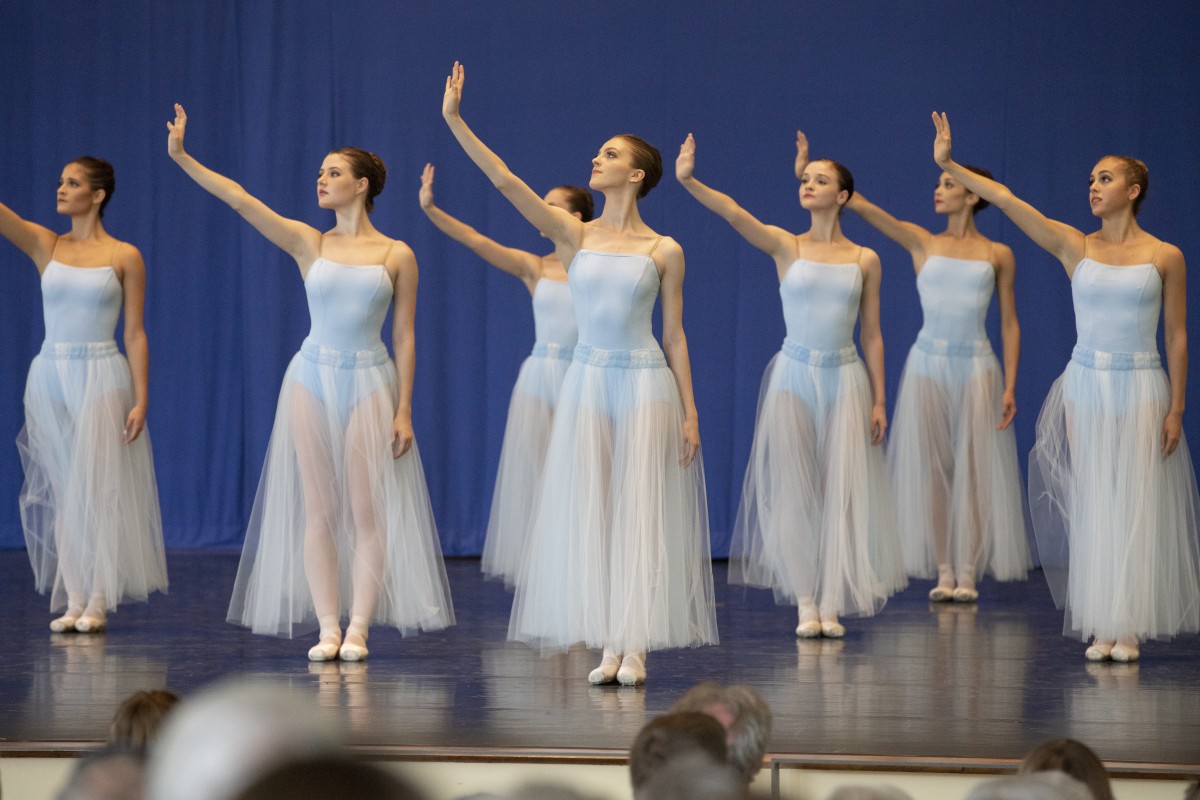 Chautauqua Festival Dancers will perform at 8:15 p.m. Monday, July 23, in the Amphitheater to live music from the Music School Festival Orchestra — for many of the dancers, it’s a new experience. For the two schools, it’s a treasured tradition.

The history of collaboration between the MSFO and the Festival Dancers is one that spans decades, and ballet mistress Glenda Lucena said that it is an incredibly important piece of the students’ experience during their seven weeks at Chautauqua.

“Dancing with live music is a special treat for the students,” Lucena said. “During the summer, they get to be on the stage many times, and this one is especially important for them.”

Lucena said that in the past, the collaboration with the MSFO has gone smoothly because of the orchestra’s dedication to matching the music with the dancers. Before the performance, the dancers and the orchestra are given one opportunity to rehearse together. Lucena said some of the musicians and conductors also attend dance rehearsals to further understand the movement and work of the students and their instructors.

“They come to see what tempo the students need, when they will pose and other things,” she said. “It’s always been a great collaboration.”

Timothy Muffitt, music director of the MSFO, said this collaboration with dancers is also a good learning opportunity for the instrumentalists.

“I think it’s good for the members of MSFO to have experience working with dancers and to think about how (that) music … translates into movement, and also to experience the process of putting an orchestra and dancers together,” Muffitt said.

Although Muffitt oversaw the collaboration, he will not be conducting the orchestra himself. Yue Bao, the 2018 David Effron Conducting Fellow, will be conducting the opening piece, “Les Animaux modèles,” composed by Francis Poulenc. “Three Facets,” choreographed by Michael Vernon, is set to the first three movements of the piece.

Bao said “Les Animaux modèles” is like an “animal carnival” to her. The music makes her picture scenes of a countryside on a July morning because of its “humor, color and wits.”

The rest of the program will be conducted by special guest, David Cho, who was a conducting fellow at Chautauqua in 2002. It has been a tradition for the orchestra to bring back a previous fellow as a guest conductor for the MSFO and Festival Dancers collaboration. Cho is now serving as the seventh music director of Lubbock Symphony Orchestra.

The second piece will be “In the Interim,” choreographed by Mark Diamond, who is celebrating his 30th year at the School of Dance. The piece will be set to Maurice Ravel’s Piano Concerto in G major.

Piano student Chuyue “Chloe” Zhang, who recently received her master’s degree from The Juilliard School and was one of the piano competition winners at Chautauqua three years ago, will be playing the piano part of the Ravel. And Zhang said she has played this piece before, though not with an orchestra.

According to Cho, this piano concerto sounds a lot like George Gershwin because of the “jazzy feelings” it produces.

The third dance, choreographed by Sasha Janes, is titled “Ecstatic Orange” and will be set to a piece by Michael Torke of the same title.

Tonight’s show will end with “Serenade,” choreographed by George Balanchine and set to music from Serenade for Strings, op. 48, by Pyotr Ilyich Tchaikovsky. The Russian Romantic composer composed three famous ballets, “The Nutcracker,” “Swan Lake” and “The Sleeping Beauty,” along many other works that are suitable for ballet.

According to Cho, Tchaikovsky’s music is fluid, with its “thick, lush, romantic sound of string playing,” as opposed to some of Poulenc’s music, which can get angular. Cho said Tchaikovsky’s music fits into human body, “instrumental-wise and also dance-wise.”

“Serenade” is a particularly special piece, according to School of Dance Artistic Director Jean-Pierre Bonnefoux. The choreography is done by “one of the great masters,” Balanchine, and is extra special because Patricia McBride, associate artistic director, worked directly with Balanchine, who created numerous roles specifically for her.

“It’s not often that you get to work with someone like Patricia, who has worked directly with Balanchine for 30 years,” Bonnefoux said.

According to Muffitt, live music is more exciting and “more visceral” than recorded music because it’s “right there in the room with you, created by people for you right there on the spot.”

“To hear what a real orchestra sounds like … is different than having a stereo turned way up in the rehearsal room,” he said. “There is a human element involved.”

Knowing that dancers are used to working with recordings, Muffitt said he, Cho and Bao tried to make the music sound as close to the specific recordings the dancers used during rehearsal.

“For that reason, we want to make it as easy as possible for them,” Muffitt said. “But that’s part of the real world. And from the audience’s perspective, to have a live symphony orchestra down there really makes the night.”

According to Lucena, the experience and opportunities that the students from the School of Dance and the MSFO receive are meant to enrich and advance their education in the craft. Many of the students seek to continue working in music or dance professionally and see the Chautauqua programs as a stepping stone into a professional career.

Lucena said that she and the School of Dance instructors work to mimic a professional work environment in order to make that potential transition into a professional realm easier for the students as they get older.

“We treat the students here as professionals,” she said. “We strive to provide an environment that is similar to what they will have if they continue to work in dance professionally.”

The experience that the education at Chautauqua provides is in many ways unique to the program for both the instrumentalists and the dancers. Bonnefoux said that the musicians are given the opportunities to work in choreographic workshops so that both the dancers and the orchestra students are able to better understand the entire process of a collaborated performance.

“I don’t know any other places like Chautauqua that allow young dancers to work directly with the musicians,” Bonnefoux said.

The Rev. Otis Moss III to discuss racial issues and influence of popular culture in dissent