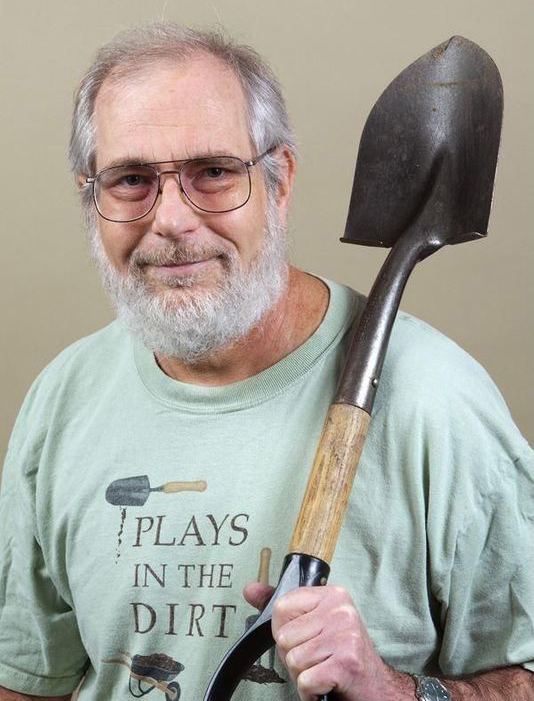 When Mike McGrath was 26 years old, he met a 22-year-old woman he described as “stunning,” who changed his life forever. She had fond memories of visiting her grandmother’s farm and picking raspberries until she was stained red from head to toe. Her goal in life at the time, McGrath said, was to recreate that.

“All she wanted was some guy to take her out to the country and grow raspberries for her,” McGrath said. “And I said, ‘I could do that.’ Thank god she asked for raspberries, which are pretty easy to grow. If she would have asked for peaches, that marriage would have lasted a few days.”

McGrath soon picked up gardening and said he got good at it — with time.

On Monday, July 30, McGrath is host of the nationally syndicated radio show, “You Bet Your Garden,” garden editor for WTOP News Radio in Washington, D.C., contributing editor and columnist for Greenprints magazine and the author of several books.

“I learned gardening in my backyard, pleasing myself and my friends, reading the literature, having fun being a backyard gardener developing that enthusiasm,” McGrath said. “But at the end of the day, I’m a broadcaster. I could have just as easily done this in a medical field, and possibly done just as much good.”

“It’s Indiana Jones somehow sliding under that door,” McGrath said. “If you told me that today, I’d have a national radio show about to celebrate its 20th anniversary, I would have a TED Talk on composting approaching one million views, and that my podcast would have a million hits a year, I would say I want some of what you’re smoking.”

After studying radio, TV and film at Temple University, McGrath worked for local Philadelphia television and radio stations, but primarily wrote. McGrath said he was one of the most successful freelance writers in Philadelphia at the time. His work covered a range of topics, from health to rock ’n’ roll, and he had columns in The Philadelphia Inquirer, The Philadelphia Daily News and The Drummer.

Despite doing well for himself, McGrath said he told his wife that he wanted to try and get a “real job” like on television programs such as “Taxi” or “Barney Miller,” a job where he could go to the same place every day and see the same people.

“She tried to have me committed,” McGrath joked. “She said I was insane. She said I had achieved what everyone who had those jobs wanted: not to have those jobs.”

McGrath joined Rodale Press as an editor for their book division in 1984, dealing with health publications primarily — something he had been passionate about since almost being killed in a car accident in 1976. He launched “Allergy Relief Newsletter” and served as executive editor for a newsletter that would become the widely successful magazine, Men’s Health.

In the early 1990s, a job opening came along that would change McGrath’s career forever — an opening for editor-in-chief at Organic Gardening magazine.

“I thought that magazine needed me because it had lost its way,” McGrath said. “That’s one of few things in life I’ve lobbied hard for where I got it.”

In McGrath’s time at the helm of Organic Gardening between 1991 and 1997, it became the most widely distributed gardening magazine in the world. Organic Gardening became a key exhibitor at the prestigious Philadelphia Flower Show, winning four “Best of Show” awards, and McGrath still lectures at the show each year.

Between 1993 and 1997, McGrath appeared monthly on the weekend edition of NBC’s “The Today Show” as a gardening expert. The magazine and McGrath won a number of awards during his tenure at Organic Gardening.

McGrath parted ways with the magazine, which was looking to redirect its image and audience. McGrath said he stayed with Rodale a few more years, working for Prevention magazine, spending this time developing a radio show for a local Philadelphia station.

“At this point, I’m kissing 40 and I ain’t that kid anymore,” McGrath said. “I realized I had to make some decisions. I found myself leaving a six-figure job for a ‘scary-figure’ job, but that had a lot of promise. So I took the leap.”

In developing his radio persona, McGrath used timing and delivery methods he’d picked up from watching comedians on the “Tonight Show” like George Carlin and “boss jocks” he heard on the radio growing up.

“It’s just the stuff that people inherently love,” McGrath said. “It’s in our DNA. What Temple (University) taught me was don’t be ashamed of it. Don’t be afraid to use it or have it in your arsenal.”

McGrath’s style has made him a nationally recognized figure with a passionate fan base, even creating catchphrases, such as McGrath’s habit of referring to his listeners as “cats and kittens.” McGrath recalled a panel he’d been on where the first question presented after the lecture was from a fan asking, “Are you going to call us your cats and kittens?” resulting in a roar of applause from the audience.

“That’s what brings them back: that love of repetition,” McGrath said. “It’s the same as gardening. It’s that friendliness, that assurance (that) if you put a seed in the ground, it will grow.”

McGrath described his show and style as a mix of Albert Einstein, Robin Williams and Jerry Lewis.

“I’m going to be smart about some things, I’m going to play a lot of word patter and then I’m just going to be plain, outright stupid, silly,” McGrath said. “I want people to be comfortable, to be laughing.”

With an emphasis on organic gardening, McGrath’s Monarch Moments lecture today, “Your Friendly Local Pollinators,” will help deliver tips and tricks to vitalize pollinators in one’s garden. McGrath will discuss organic methods to ensure local insects, birds and other species are not being harmed in the invigoration of a garden.

“If you’re not an organic gardener, you don’t have any local pollinators because you’re killing them,” McGrath said. “No. 1 is don’t use chemicals.”

McGrath’s Brown Bag lecture on Tuesday, “Raised Beds and Compost: The Keys to Organic Success,” discusses the dangers of being a “flat earth gardener.” With gardens becoming smaller since the 1980s coinciding with people’s desire to grow a wider diversity of plants, McGrath said the only way to achieve both is to be smarter.

“That’s pretty easy to do because people often waste space,” McGrath said. “People work against themselves.”

With the youngest listening demographic of any show at his station, McGrath said the large number of people in their 20s in his audience is a result of a “back to the land” movement, similar to the one that drew him in years before. McGrath said a lot of making the most of tighter gardens, and gardening in general, is being willing to make mistakes.

“A guy who never fails will go to the grave just as (stupid) as the day he was born,” McGrath said. “(Young people) go out and they’ll make epic mistakes, like try to grow tomatoes indoors. And those epic mistakes will make them gardeners for life.”