Mathews preached at the 9:15 a.m. Monday morning worship service on July 24 in the Amphitheater. His sermon title was “Hidden Figures: Women of the Resistance,” and his Scripture text was Exodus 1:8-2:10, the birth and rescue of Moses by Jochebed, Puah, Shiphrah, Miriam and Bithiah.

Family, said Mathews, is what you make of it. That was the theme he suggested for his family reunion in 2017. His grandfather was the fourth of 12 children, and he had 19 children.

Because these cousins did not grow up together, Mathews said they have to be intentional when they get together to tell their family stories and share something about their branch of the family.

As he travels, Mathews often recognizes a face because it reminds him of an ancestor, and “even if we can’t identify ways we are related by blood, we just own each other as family.”

The story from Exodus is a story about a family: the descendents of Jacob, Leah and Rachel, who have become a challenge to Pharaoh. Pharaoh was paranoid, xenophobic and genocidal; he feared this alien group.

Pharaoh thought by killing every male Hebrew child, he could reduce their power and cut them off. But he failed to see the women, the real power and producers of the Hebrew people.

There are five women, Mathews said, “who rejected the Empire, refuted the narrative of Pharaoh, resisted his public policy and threw some prophetic shade at him.”

The midwives, Shiphrah and Puah, faced a moral crisis.

“We are not sure if they were Hebrews or Egyptians, but they made a clever analysis and devised a strategy to throw shade at the genocidal Empire,” he said.

Their strategy was to tell Pharaoh that the Hebrew women “are not like the Egyptian women; for they are vigorous and give birth before the midwife comes to them.”

Jochebed, Moses’ mother, and his sister, Miriam, had a plan to save him. They built an ark for him at tremendous risk. Moses was like many children today of immigrants, Mathews said — black and brown children, poor children, who have no one to protect them from the Empire.

“We don’t know the Egyptian princess’ intentions,” Mathews said. “Her name was Bithiah in Hebrew or Asiya in the Koran. She allowed (Moses) to grow for later service.”

The seeds that these women planted grew into a movement that led to emancipation.

“These five women threw prophetic shade at the Empire,” he said. “The story of freedom depends on them. It is the story of how to survive alienation and moral fragmentation.”

In present day, there are rulers who don’t care about the Josephs, the people who fought for freedom. Every day, people work to thrive in the face of white supremacy, fighting the myths of hierarchy, scarcity and isolation, in the face of being water-hosed by “tweets and wanton disrespect.”

Mathews said that he has a “want and need to check out. I turn off the alerts on my phone and escape to binge on Netflix, put ‘Power’ and ‘Game of Thrones’ on my DVR, and watch a lot, a lot of British TV.”

It is good to turn off the devices and take a break.

“But we should never turn off our souls,” he said. “We can’t escape into hopelessness. We have to build on it. We have to throw shade at the Empire and build the loving community, a community of abundance.”

Thank God for the midwives, he said, who birth hope out of hopelessness, the midwives who know how to breathe deeply to bring about the Beloved Community — those like Harriet Tubman, Sojourner Truth and Fannie Lou Hamer who knew how to fight for freedom.

The Rt. Rev. V. Gene Robinson, vice president of religion and senior pastor, presided. The Rev. John Morgan, pastor of the Williamsburg Presbyterian Church in Williamsburg, Virginia, read the Scripture. The Motet Choir, under the direction of Jared Jacobsen, organist and coordinator of worship and sacred music, sang “The Call” by Z. Randall Stroope. The Robert D. Campbell Memorial Chaplaincy provides support for this week’s services. 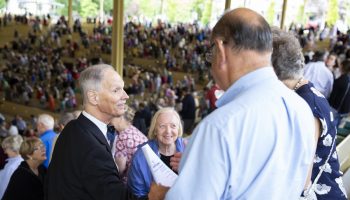