“What could the Spirit possibly be saying in that Scripture?” said the Rev. Michael-Ray Mathews, referring to the story of the murder of Rizpah’s children in 2 Samuel.

“If Rizpah were in the house, she would be leading us in that song,” Mathews said.

His sermon title was “Saying Yes by Saying No: The Healing Power of Disruption,” and his Scripture text was 2 Samuel 21:8-14.

In the story in 2 Samuel, Rizpah, a concubine of King Saul, sees her two sons and five step-sons taken by King David and given to the Gibeonites to be impaled on a mountain before the Lord, as an appeasement for the slaughter of the Gibeonites.

Rizpah went out to the hill and kept the birds away by day and wolves by night so the bodies would not be desecrated. When David heard what she was doing, he dug up the bones of Saul and Jonathan and buried them with those who had been impaled. Then the famine in Israel ended.

“She was solid as a rock, rooted as a tree,” Mathews said of Rizpah. “These words are the theme of her story and witness; they embody her stance against the Empire in the face of state-sanctioned violence against her sons and their half brothers.”

He quoted Ella Baker, African-American civil and human rights activist, that until the killing of the black sons and black daughters of black women is as important as the killing of a white woman’s children, “we who believe in freedom cannot rest until it comes.”

Mathews said that the Theology of Resistance provides a framework for conversation about this week’s theme, “The Ethics of Dissent.”

Using stories, the people of Faith in Action describe uncommon encounters, the disruptions those encounters caused and the space they provide for sacred reimagining “so that when people see our prophetic action, they will see it is informed by moral courage.”

Moses’ encounter with the burning bush disrupted his exile in Midian. He could reimagine how his people experienced slavery and what he could do to change that.

“Reimagining,” said Mathews, “should be part of our spiritual practices.”

Organizing is a holy conspiracy, he said, with the self, the other and the sacred, saying yes by saying no.

“We have always said yes to the Beloved Community,” he told the congregation.

That was the point of organizing, a way for the church to realize the realm of God, develop leaders and provide innovative policy — “building people power that will improve real lives.”

The problem was that the organizers were trying to engage the Beloved Community without taking account of the forces working against it. These forces are individuals and the “invisible forces of culture, racism, the myth of scarcity and rabid individualism.”

“We have to say no to (the) Empire to protect and take seriously the yes of the Beloved Community,” Mathews said.

A question that he asks in training of clergy is, “What does your faith and your spiritual tradition say to help you resist the logic and impulse of Empire?”

Jin S. Kim, the founding pastor of the Church of All Nations and a Presbyterian pastor from Minneapolis, helped Faith in Action define the terms “logic and impulse of Empire.”

“The logic of Empire is that the Empire defines reality and says, ‘This is the way that it (life) is,’” Mathews said. “This is America, built on hierarchy, exploitation and centralized power. It has always been this way and always will be, and the sooner you get on board, the better.”

Mathews said the logos of God’s Kingdom is that through Jesus, all things were created in his image. We are all related, and we have an alternative narrative.

According to Kim, the impulses of the Empire are the invisible forces that reinforce the logic.

These forces are internalized, and “we deceive ourselves if we do not examine them critically. The Empire is embedded in our flesh,” Mathews said.

In the Scriptures, Rizpah examined the way the empire of David’s kingdom was embedded in her. David ordered the state-sanctioned slaughter of seven sons of Saul to appease his enemies and restore the nation’s standing with God.

“Empire loves scapegoats,” Mathews said. “Empire cuts deals in order to maintain a semblance of order. The scapegoats are immigrants, Jews, Muslims, women and girls, the poor, the formerly incarcerated.”

The Empire offers these people up, and “even we in the church go along with it,” he said. “We endorse it with our silence, with making the system work, by not asking if there is another way to be.”

Currently, there are many people who are interrupting the logic and impulse of Empire, and “women of color are leading the charge.” Through Black Lives Matter and Say Her Name, say all their names, Matthews said, “they are saying no to violence against their children, no to Empire and yes to the Beloved Community.”

Taking a cue from the song from the television show “Arrested Development,” “Mama’s Always On Stage,” the women who are leading the charge are organizers, activists and pastors.

“The mamas are always on stage,” Mathews said. “They have taken sackcloth and spread it on a rock from sunup to sundown so that all can see the truth.”

They are no longer shamed and silenced into submitting to injustice.

“Like Rizpah, they try to keep the story of their murdered children alive, protecting their bodies from the birds, or the tweets, by day and the wolves by night,” Mathews said.

The mamas are taking the deaths and executions that are meant to cause shame and submission and “turning them into a spectacle, into a monument to injustice.”

“Rizpah forced the king to give her children a proper burial,” Mathews said, “and only then was the land healed (of its famine).”

This organizing by Rizpah was a holy conspiracy of one, of one determined mama to reorganize the self, the other and the sacred.

“How is disruption a part of this story, of your heritage and your rituals?” Mathews said.

Out of the disruption of this text and tradition, how do we instigate disruption in the community and “dare I say it, in the congregation?” he said. “Who must be disrupted today and why?”

When the mamas are on stage, God is on stage.

Like Rizpah with all the mamas on stage, he said, we can watch for the birds and tweets by day and the wolves by night and serve the God who is with us day and night.

“Solid as a rock. Rooted like a tree. We are here standing strong,” Mathews said. “Like Rizpah, we can transform victims into symbols of new life, of our victory over sin, shame and death. Just ask God’s son.”

The Rev. Jon Morgan presided. The Rev. John C. Dorhauer, author, theologian and ninth general minister and president of the United Church of Christ, read the Scripture. The Motet Choir, under the direction of Jared Jacobsen, organist and coordinator of worship and sacred music, sang “Ubi Caritas,” by Dan Locklair. The Robert D. Campbell Memorial Chaplaincy provides support for this week’s services. 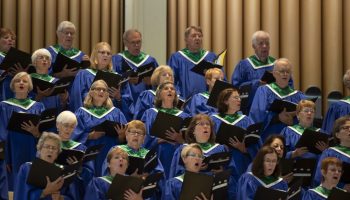