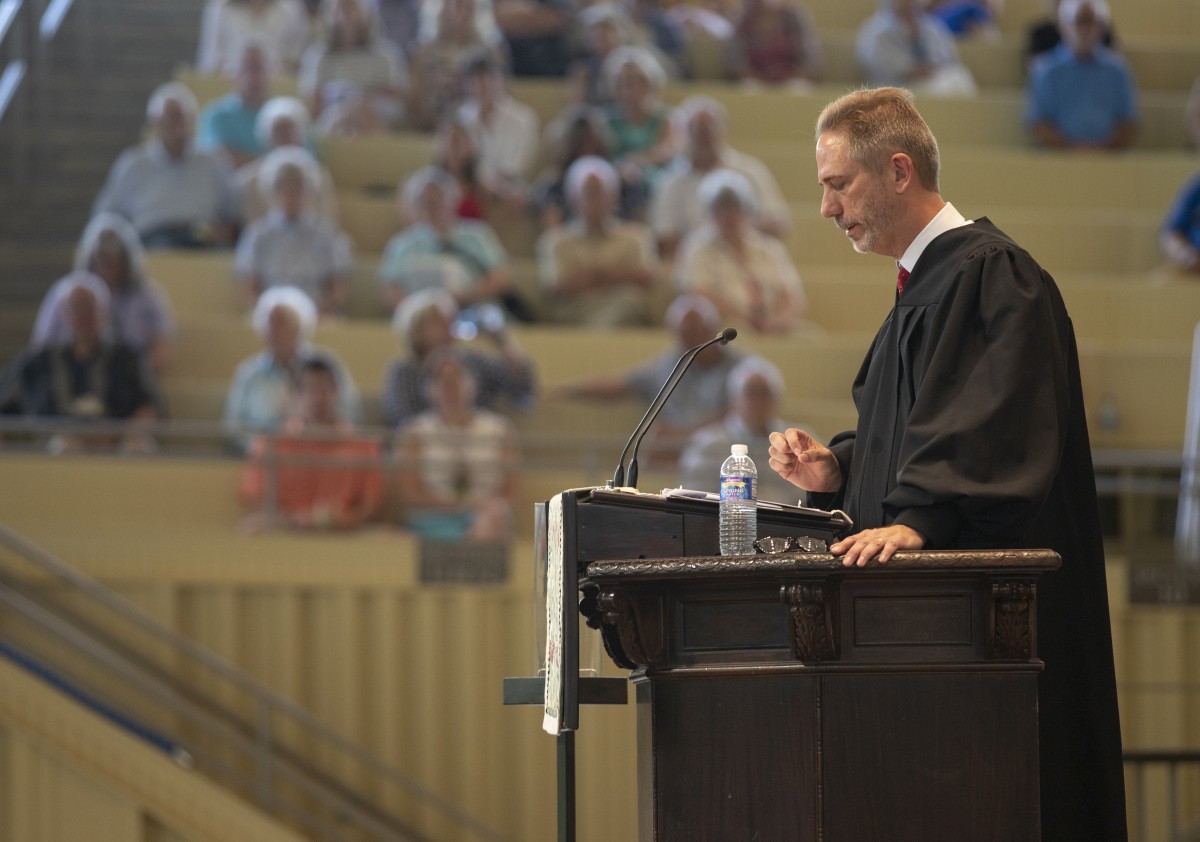 In this time of great moral confusion, it is a good time to look at some great central moral principles,” said the Rev. David Gushee at the 9:15 a.m. Monday morning worship service, July 2 in the Amphitheater.

His sermon title was “On Dignity,” and his Scripture text was Psalm 8. He will look at justice, peace, love and community the rest of this week.

These moral principles are not exclusive to Christianity, he said.

“They are found in the Bible and are central to any faith-based morality,” Gushee said.

Gushee said that he imagines Psalm 8 was written at night, under the stars. He could see King David looking at the “great Middle Eastern sky, before we learned to block out four-fifths of it with our lights. (That’s) not progress.”

David was struck by humanity’s smallness under the sky. He asked, “Who are we that God would notice us or care for us individually?” He knew the tradition and asserted that humans are a little lower than the “elohim,” the angels, or gods or God.

“We are crowned with glory and honor, according to David,” Gushee said.

Monarchs were glad to say that they were crowned with honor and glory, especially in an era of the divinity of kings, “but David thanked God that in the Jewish tradition, all humans are royalty, all are kings and queens.”

As royalty, humans have dominion over the earth. Since the Industrial Revolution, the term “dominion” had a downside, Gushee said, because it came to mean the freedom to dominate creation and do ecological harm.

“Today, we need to have an ecologically sensitive theology that sees creation as a sacred trust and not a license to dominate,” he said.

Humans tend to think hierarchically, to assign high or low value to one another using categories like nationality, sexuality or skin tone.

“The text does not allow that,” Gushee said. “As Genesis 1 says, all are created in the image of God.”

Whenever we encounter another human being, we are meeting royalty, Gushee said.

“We have to respect their dignity and treat them with honor, help them to flourish,” he said. “There are no ‘children of a lesser God.’ ”

When we see patterns in ourselves, in our nations, of people who are treated as less than us, we must resist, Gushee told the congregation.

“We have to make a stubbornly impervious resistance to any attempt to sacrifice the dignity of a person or group of people,” he said. “Each life is precious. We must govern our behavior without exception by this resistance from the beginning of life to the end, from the poorest to the richest, from our nation to all nations.”

Gushee said that human dignity is “at the core of my work, and I have sought to apply that to all life.”

He noted that he is opposed to abortion and also opposed to the indignity with which many women are treated. He is opposed to euthanasia as well as inadequate health care, against war and our placid acceptance of our own nuclear weapons, against terrorism and against torture of terrorists, against murder and the death penalty, against discrimination, against LGBTQ people and the dehumanization of immigrants.

“I believe the temptation to sacrifice human dignity is so strong that only a theological commitment to beliefs about God and each person we meet gives us the force to resist dehumanization,” he said.

Gushee said he knows and works with people who work for human rights for many reasons. However, he believes that for the long trajectory, humans need a moral theological grounding, that we “need God who gave the principles, not just the principles alone.”

Only those who tremble in loving awe before the God of all creation are able to love all creatures, especially humans, he said.

“My favorite line from (Les Misérables) is ‘To love another person, is to see the face of God,’ ” he said.

Gushee said that to hate, to demonize or be indifferent is to slam the door in the face of God.

“If we fall on our knees before God, we learn to love our neighbors as God loves each of our neighbors,” he said.