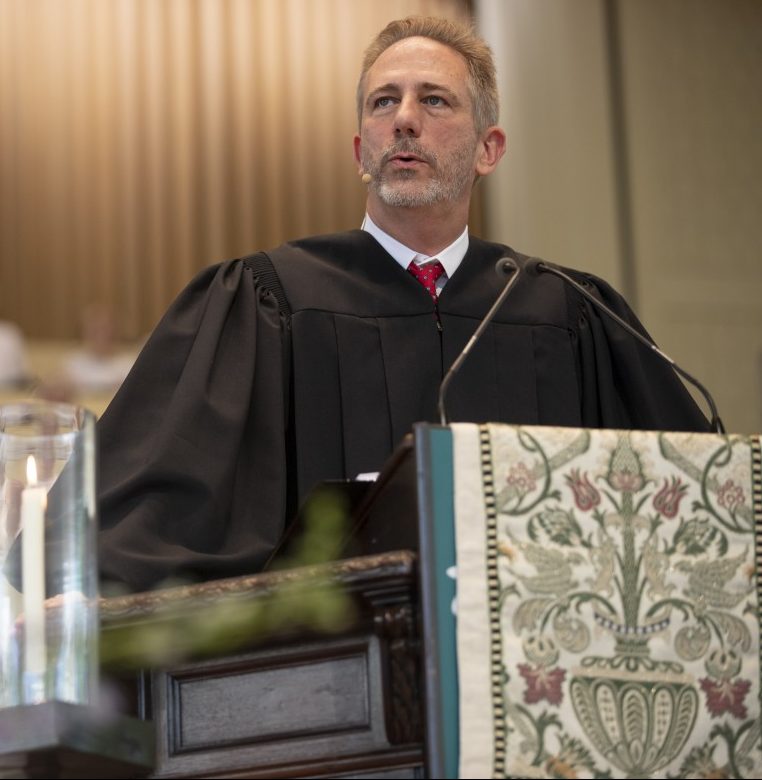 The Rev. David P. Gushee continued his sermon series on great ethical themes in the Christian faith with “On Justice” at the 9:15 a.m. Tuesday morning, July 3 worship service in the Amphitheater. His Scripture text was the Gospel of Luke 18:1-8.

This passage, Jesus’ parable of the widow and the unjust judge, “is about justice and how hard it it to hope and yearn for justice when the world is manifestly unjust,” Gushee said.

He asked the congregation if anyone had ever run into a person who, like the judge, had no respect — people “who bully people because they can” and who “have no fear of God, no respect for people and no respect for the power of their office.”

“Have you ever experienced people in uniform,” Gushee said, “authorities like judges, the court system, police officers who are in love with their own authority?”

Gushee’s first experience with this kind of person took place when he was a 22-year-old seminary student, driving from Louisville to his family home in Virginia and back again. He and his wife were newlyweds and drove “the worst car in the world.”

As he crossed the Kentucky line on the way back to school, a police officer stopped Gushee and told him he was going 75 mph in a 55 mph speed zone.

“I know I was not going 75 because this car can’t do more than 57,” Gushee told the officer. “I have been trying, and you are welcome to get in and see.” Gushee said the officer snarled at him. “Don’t think you can talk back to me like that again,” the officer said.

Gushee said he was treated unjustly, but “now we know that many people experience this harrassment weekly.”

He said that we need people in positions of public responsibility to have authority over others, “otherwise civil society would be impossible.” However, if those people don’t honor the limits of their authority, “ … we will have tyranny and injustice.”

In ancient Israel, the Jewish people were united under God, and no one was an exception to God’s law, Gushee said. Judges were called to protect those who had the least amount of power under the law. That is why the judge in the parable is an affront to Jewish law and the covenant with Israel. There was a realism about power in ancient Israel, an understanding that imbalances develop.

Gender bias, age discrimination, social connections, racism and wealth can pervert the law because they have the power to reinforce unjust power, Gushee said. Jewish law was geared toward leveling power, to protecting property rights, especially those of the people on the bottom.

“Judges were to look out for the rights of those on the bottom — the widow without a husband, the orphan without a father, the stranger who had no kin,” he said. Gushee said that people in power were needed “to remember their sacred calling to protect.”

The widow in Jesus’ parable has an enemy who is trying to take her land or drive her out because of her debts. She must get justice, and so she keeps hounding the judge to get it.

Jesus assumed that his listeners understood the situation. The word used here is ekdikéō, which means “justice.” It is also sometimes translated as “righteousness,” which can hide the meaning.

“The widow wants justice, not a good person,” Gushee said.

Her only strategy was to wear the judge down. When he gets to the office at 8 a.m., she is there. When he takes his coffee break at 10 a.m., she is there. At lunch in the Jericho café, she is at the next table. Mid-afternoon, she is outside the bathroom window. She follows him home at night and knocks on his door.

The judge realizes that the widow will not stop bothering him until she gets what she wants. In one translation, Gushee said, the judge decides to give her what she wants, “so she won’t come and slap (him) in the face.”

In this parable, Jesus asks his audience, if such an unjust judge will grant the widow justice, won’t God grant justice to his chosen people, the ones who cry out for relief?

But will faith in a good and just God hold out while the people wait for justice?

“How long will people wait and weep for justice before they stop addressing God at all?” Gushee said.

Holocaust survivor Elie Wiesel wrote that he went into Auschwitz a young man full of faith, but his just God died there.

“There are many people who have had faith ground out of them,” Gushee said.

If we sit by passively while others cry out for justice, what will happen? Gushee suggested three actions for people to take.

He urged the congregation to remember that there are oppressed people everywhere who cry out for justice.

“The person who works three jobs and can’t support a family; the objectified and assaulted woman; crime victims and their families; people wrongly convicted of crimes; seniors who are defrauded; people involved in unjust traffic stops; kids in miserable schools; civilians displaced by war; inmates assaulted by prison guards,” Gushee said. “What is your list? Who are the ones you hear crying?”

What are you doing to act for those who are dominated, victimized, oppressed, Gushee asked.

“Pick one cause so justice fatigue will not set in,” he said. “Find one cause to invest your life in.”

Take a fresh look at Jesus, who knew all about the cries of the people and state power gone awry. “Jesus was lynched, victimized by unjust state power. He submitted to a phony arrest, trial, abuse and death,” Gushee said.

Jesus was working for a world in which justice prevails.

“When the Son of Man comes, will he find faith on earth, fighting for justice in an unjust world?” Gushee said.

Allison LoPrete presided. Elizabeth Waters, a member of the International Order of King’s Daughters and Sons, the 2018 Chautauqua Scholarship Program coordinator and a senior at West Virginia University, read the Scripture. The Motet Choir, under the direction of Jared Jacobsen, organist and coordinator of worship and sacred music, sang “The Dream Isaiah Saw” by Glenn L. Rudolph. The Edmond E. Robb-Walter C. Shaw Fund and the J. Everett Hall Memorial Chaplaincy provide support for this week’s services.