Never Gets Old: An Evening of Concertos’ to showcase both CSO, soloist Gavrylyuk 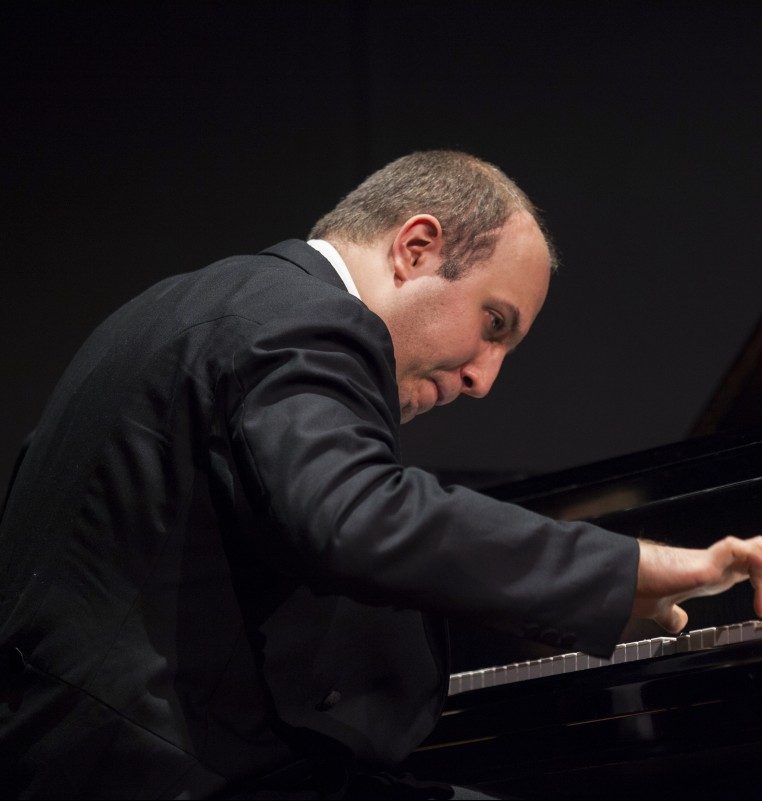 Like those before it, Alexander Gavrylyuk’s 13th season at Chautauqua has been a busy one. The pianist can be seen whizzing around the grounds on his bicycle, teaching master classes and private lessons to 22 piano students at the School of Music, spending time with his family and preparing for concerts.

He’s performed two so far: a sold-out concert of chamber music in Elizabeth S. Lenna Hall and a solo recital in the Amphitheater that was described by guest critic Andrew Druckenbrod as “powerful” and “compelling.”

At 8:15 p.m. Thursday, July 12 in the Amphitheater, Gavrylyuk will take the stage for his third and final concert of the 2018 season. He will join Maestro Rossen Milanov and the Chautauqua Symphony Orchestra for “An Evening of Concertos,” which will feature Bela Bartók’s Concerto for Orchestra and Sergei Rachmaninoff’s Piano Concerto No. 2.

The title of the Bartok can be a bit misleading: the term “concerto” usually implies that the orchestra will be joined by a soloist.

Instead, Bartok’s “concerto” features the entire orchestra as soloist. Throughout the piece, different instruments and sections are featured as the solo voice.

Bartok himself said that he intentionally wrote virtuosic passages for each instrument. As a result, passages from it are frequently asked for at orchestra auditions.

Rachmaninoff’s concerto, however, will feature Gavrylyuk in front of the orchestra as soloist. In a sense, the pianist has been building toward this performance of Rachmaninoff’s masterpiece.

Gavrylyuk began the season by including a few short Rachmaninoff preludes in his solo recital, then performed a much longer work of the composer’s on his chamber music concert, and now he will be joined by the whole CSO for the massive Piano Concerto No. 2.

To say that Gavrylyuk holds the composer in high regard would be an understatement.

“I find that Rachmaninoff, as far as I can see and feel, was a man of incredible dignity and strength of spirit which always searched for justice and truth,” Gavrylyuk said. “That’s why it never gets old. It doesn’t matter how many times you play it.”

It’s a good thing this piece doesn’t get old for Gavrylyuk; the pianist first publicly performed the Piano Concerto No. 2 in Tokyo’s Suntory Hall when he was 18, and he’s given a performance of it every year since.

That doesn’t mean it’s always the same, however. According to Gavrylyuk, the concerto effortlessly grows and changes with him as he passes through different stages of his life.

“It kind of does it on its own,” Gavrylyuk said. “When I came back (for this performance), suddenly it sounded completely different from the way I played it in Australia, just eight months ago. Great music has this kind of tendency of evolving on its own.”

Rachmaninoff wrote this concerto immediately following a long and deep depression, during which he composed very little, Gavrylyuk said. The opening of this piece — a series of chords played by the solo piano — marks the composer’s recovery and return to composition.

For Gavrylyuk, these chords represent a release at last of the composer’s inner world that had been kept inside for so long. That world, he said, is like a field of flowers: an immensely beautiful spectacle when viewed as a whole, but composed of individual flowers that are equally as striking on their own.

The challenge for both audience and performers, he said, is to not get bogged down by over-appreciating the small moments of beauty — the individual flowers.

“If you do that all the time, you lose the perspective of the field,” Gavrylyuk said. “And the field is actually the most impressive thing.”

Gavrylyuk is looking forward to this performance, in particular because of his relationship with the Chautauquan audience.

“They’re the dearest audience in the world for me,” he said. “Playing for them is like playing for family and friends — that feeling that there is absolutely no barriers, and there is just this direct connection and a mutual love for openness, sharing of music, sharing of the greatest things that human beings have composed and written and come up with. These are the most rewarding times for me personally, so I’m very grateful.”