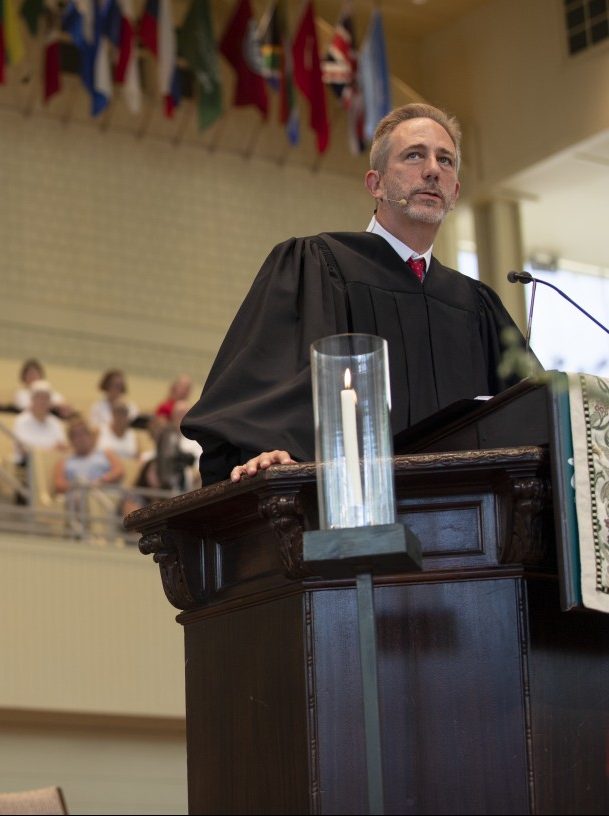 So, it’s the third night on the couch, and the reason is an unresolved conflict with your special someone,” said the Rev. David P. Gushee at the 9:15 a.m. Wednesday morning, July 4 worship service in the Amphitheater.

His sermon title was “On Peace,” and the Scripture text was Matthew 5:21-26, part of the Sermon on the Mount.

Conflict happens to everyone, he said.

“People have different opinions and needs, and they get tired and say things that they don’t mean,” Gushee said.

But sleeping on the couch for three nights happens when “both (parties) are too dang stubborn” to take the first step to resolve the conflict. Each person wants the other to apologize first.

The idea of peace is one thing, but the reality is harder to achieve. Gushee and his mentor, Glen Stassen, in their book, Kingdom Ethics: Following Jesus in Contemporary Context, wrote that the Sermon on the Mount is about God’s will and how to accomplish it.

Jesus, Gushee said, gave a “shrewd and realistic analysis on why conflict is intractable and then taught his listeners how to make peace that was relevant on every level of society.”

Gushee said that traditional interpretations of this passage have told people to do something that is “impossible to achieve.”

“But you should be glad I told you,” Gushee said.

Telling people it was just as wrong to be angry as to murder, “left perfectly ordinary people trying not to get angry,” he said.

“Have you ever been angry for a good cause? Do you get angry when people’s rights are violated, when a child or people are bullied?” Gushee said. “Is it wrong to get angry then? I don’t think so.”

Jesus got angry at the money changers in the temple and at the religious authorities who trampled on others.

“The high ideals interpretation does not hold up if we look at Jesus,” Gushee said.

Gushee said Jesus was describing an escalating pattern of anger. In this interpretation of the passage, anger in the heart leads to an insult, then calling someone a fool — “a term that meant ‘godless’ in the Hebrew culture. In other words, ‘fighting words.’ ”

This verse is diagnostic, Gushee said.

“It shows how people get to the point of killing.” Gushee said. “These escalating patterns of violence go from the heart to words to fists, knives and guns.”

This escalation can happen quickly, like road rage, or take a long, slow burn that suddenly snaps. Jesus showed his listeners how to reverse the escalation. If you are making an offering at the altar, Jesus told them, and you remember that your brother or sister has something against you, go and reconcile, then offer your gift to God.

The temple was the holiest place in Jerusalem, and an individual did not often make a sacrifice there, Gushee said.

“Even this most sacred act was not more sacred than making peace,” Gushee said. “We are to go and be peacemakers.”

It can be hard to be peacemakers, he said. It may appear better to “let sleeping dogs lie,” or to just walk away or to take it to heart when someone says, “Go away and never come back,” or to confront the government.

Romans 12:18 says that so far as it depends on you, “ … live peaceably with all.” Gushee said that there are times when you have to tell someone to stop what hurts you or others.

“If you can’t raise the issue, there can be no peace,” Gushee said.

He used Martin Luther King Jr. as an example of someone who was a serious follower of Jesus and a serious peacemaker who would not accept injustice.

King said there could be no peace as long as there was complacent domination of the complacent, subservient people who are dominated.

Gushee told the congregation that to try to make true peace, we have to speak actual truth that brings reconciliation and justice. We have to listen humbly, so we can move into the true peace of reconciliation.

Peace is made by hard, honest conversation, and “it is the highest calling to live in honest, reconciled peace,” he said. “Let us be peacemakers in our homes, our communities, the nation and the world.”

Allison LoPrete presided. Zoltán Toth, a scholarship student with the International Order of King’s Daughters and Sons, read the Scripture in English and Hungarian. He comes to Chautauqua from Transcarpathia, Ukraine, where he recently graduated from the Ferenc Rakoczi II Transcarpathian Hungarian Institute with a degree in English language and literature. The Motet Choir sang “America, the Beautiful,” arranged by Mark Hayes. J. Paul Burkhart served as narrator. Jared Jacobsen, organist and coordinator of worship and sacred song, directed the choir. The Edmond E. Robb-Walter C. Shaw Fund and the J. Everett Hall Memorial Chaplaincy provide support for this week’s services.