Ron Donoughe’s first instructor advised him to paint what he knew. Donoughe knew the Pittsburgh and western Pennsylvania area, so he started painting that, and hasn’t stopped. 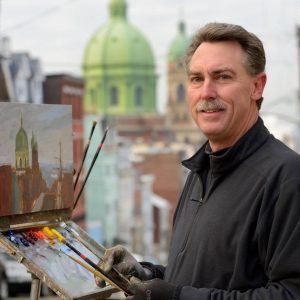 Donoughe’s work will make up Visual Arts at Chautauqua Institution’s new exhibit, “Cityscapes: Paintings by Ron Donoughe,” which opens with a reception at 3 p.m. Wednesday, July 25, in Strohl Art Center.

“I think even if you’re not from Pittsburgh, it’s going to resonate,” Donoughe said. “It’s a lot of architectural and gritty scenes. Not postcard stuff.”

His work, specifically a project in which he set out to paint all of Pittsburgh’s neighborhoods, has been so well-received that starting this year, Aug. 1 will be known as “Ron Donoughe Day” in the area.

Donoughe said his paintings in “Cityscapes” comprise some of his best work yet.

“I really tried to do some different lighting situations of the day or evening, so there are some nocturnes in there and sunrises and sunsets,” Donoughe said. “Things that are hard to paint because the time is so limited.”

All the featured paintings are the same size and on cradled panels. They will be lined up on the walls of Strohl horizontally, a staging choice by Judy Barie, the Susan and Jack Turben Director of Galleries.

Originally from Loretto, Pennsylvania, Donoughe moved to Pittsburgh in 1980 to student teach art and has remained in the area ever since. 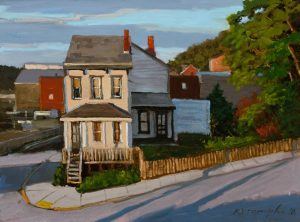 In 2002, Donoughe established the Plein Air Painters of Western Pennsylvania. The organization continues to hold regular meetings, where en plein-air (French for “outside”) painters can convene and work together around Pittsburgh.

Every day is different for Donoughe because his ability to paint depends on the weather. But every day, he spends either a whole morning or afternoon painting. When he’s not painting, Donoughe said he’s usually either working on the “behind-the-scenes” logistics of gallery exhibits or handling correspondence.

“I don’t find that I ever run out of inspiration because of light and shadows,” Donoughe said. “I’m always looking for the right scene or feeling of a scene, and I’ve actually gotten a pretty good following over the years from staying right here.”

Donoughe’s idea for his 2013-2014 “90 Pittsburgh Neighborhoods” project that earned him his own holiday was sparked by an antique, wood-cut map in his daughter’s apartment. The design made him want to craft something similar for Pittsburgh, but Donoughe wanted to be sure he represented all the city’s neighborhoods.

Many of the neighborhood portraits feature defining houses, but some depict side streets or snow-coated industrial buildings. One is a cemetery.

“People are passionate about this city, and their enthusiasm has been overwhelming,” Donoughe told the Pittsburgh Post-Gazette in 2015.

His twin brother encouraged him to turn the project into a blog, and Donoughe continues to update it with his paintings. “90 Pittsburgh Neighborhoods” has also now been printed in book form, with extended stories behind Donoughe’s cityscapes.

Donoughe said he was inspired by Andrew Wyeth, an artist who painted almost entirely in his hometown southwest of Philadelphia and in Cushing, Maine.

“I was impressed with the idea that you could dig deeper into a culture in two areas,” Donoughe said, noting that he liked the “contrast” between Wyeth’s frequently painted locations.

While studying with other painters in the southwestern United States, Donoughe said he once considered moving from the Pittsburgh area to work elsewhere. But he thought the region was already well-represented by artists.

“I wanted to paint things that were never painted before and give voice to areas that have been overlooked by artists. I want to contribute to an area of art history that would encapsulate my time here as an artist.”

So he stayed in Pittsburgh, adopting Wyeth’s approach and following the advice of his first instructor.