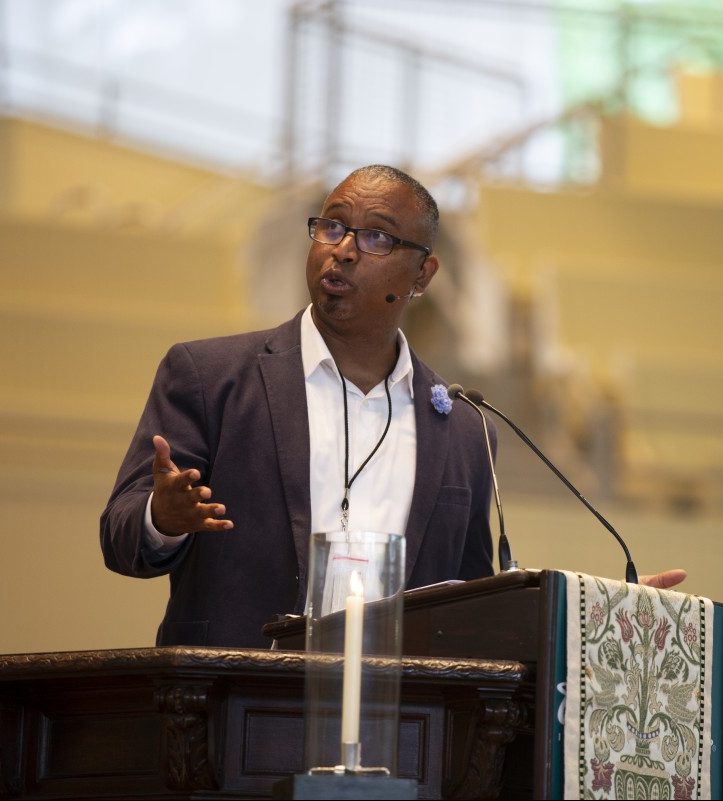 “Revolution is about what happens in your mind, heart and soul. The first revolution is internal; that is a standard organizing principle,” said the Rev. Michael-Ray Mathews at the 9:15 a.m. Tuesday morning, July 24, worship service in the Amphitheater. His sermon title was “The First Revolution: Encountering God, Self and the Other.” His Scripture text was Exodus 3:1-5, Moses and the burning bush.

“The Theology of Resistance: encounter, disruption, re-imagining and prophetic action. Repeat after me,” he said.

Mathews then sang a psalm that he had written:

Faith-based organizing has a number of pillars that empower people to act. The most foundational, he said, is internal.

“Organizing is about the transformation of individuals and society,” he said. “We are trying to build enough people power to change the experience of people here and around the globe.”

“Those are great phrases for grant writing,” he said. “This change begins in individuals. It begins with you, and it begins with me.”

He recalled a record his father had of Gil Scott Heron’s, “The Revolution Will not be Televised.” It cannot be televised, Mathews told the congregation, because it happens between our ears; the revolution will change your mind about how you see things.

Moses experienced this first revolution after he ran away from Pharaoh’s court because he had killed a slave master who was abusing a Hebrew slave. Moses was in exile in Midian, married to Zipporah, when he experienced an internal revolution that changed his identity, calling, purpose and leadership as a liberator, Mathews said.

“In the deep, deep, nowhere, Moses found his calling as the prophet of the resistance,” Mathews said. “The burning bush was the location of this revolution.”

The Theology of Resistance began with an encounter that Mathews never expected or wanted. He found out about the shooting of Michael Brown in Ferguson the same day that Robin Williams died by suicide. Mathews’ brother had died by suicide the year before, and he was grieving again.

Michael McBride, a colleague at Faith in Action, called to tell him about Brown.

“It took him a while to get my attention,” Mathews said. “I thought, ‘Too bad, it is a sad reality facing our society that needs to stop,’ but I was not sure what we could do.”

“I was full of grief, apathy, indifference and full of questions,” he said. “Did Brown rob the store, did he do wrong? I found myself looking at Michael Brown and thinking, ‘Was he a good enough victim to generate sympathy?’ ”

How could God’s Spirit be at work in Ferguson? Mathews traveled to Ferguson four times and could see a pattern, he could see a culture that as a way of life, was a way of death.

“I slowly understood the fear and broken relationships between the people of Ferguson and the police,” he said. “The more I listened, the more I could see the bigger picture, the clearer pattern, the deeper context.”

Brown’s death took on a significance that was greater than the muddy details of the event.

“I am the product of the black church, the black middle-class church,” Mathews said. “We have been hearing but not listening to the cries of the young black and brown people.”

The future of the church depends on listening to them and being changed.

“We had to stare down a system that would use rubber bullets, tear gas and foul language against clergy and peaceful protesters,” he said. “We had to see what we had not seen before.”

There is a midrash, an interpretation of the story of Moses and the burning bush, that says the miracle was not that the bush was burning, but that Moses turned to look. Bushes often burn in the desert, but this one was not consumed.

“The burning bush is God’s long waiting for someone to turn and engage,” Mathews said. “Moses was curious enough to engage and inquire about the meaning of a burning bush. Then he heard the voice of God.”

“Where are the burning bushes today?” Mathews said. “How far will we go beyond our own wildernesses to encounter the calling of this moment to meet those we don’t know, don’t understand or don’t like, but whom God loves?”

We are changed in deep relationships and profound encounters, Mathews said. When members of Faith in Action were protesting in front of the police station in Ferguson, they were calling for repentance and healing from the police.

“We had to have our own ‘come to Jesus’ moments because we had failed to listen, we failed to be part of the lives of the people when we turned away single mothers and their children from our churches,” he said.

They saw that they had been chaplains to the Empire, he said, and now they had to be prophets of the resistance.

God called them to take off their blinders to see the black youth of Ferguson who wanted to be free, who wanted them to honor justice.

“Ferguson was holy ground, and we had to acknowledge that something was happening and would be for years to come,” Mathews said.

There are bushes everywhere if anyone is willing to turn aside, he said. God did not speak until Moses turned aside.

“We need more people to be more curious, to turn aside,” he said. “People are changed by profound encounters and deep relationships.”

Chautauqua is a place where people come to make sense of their profound encounters, he said, but no one should leave Chautauqua without the commitment to engage the world.