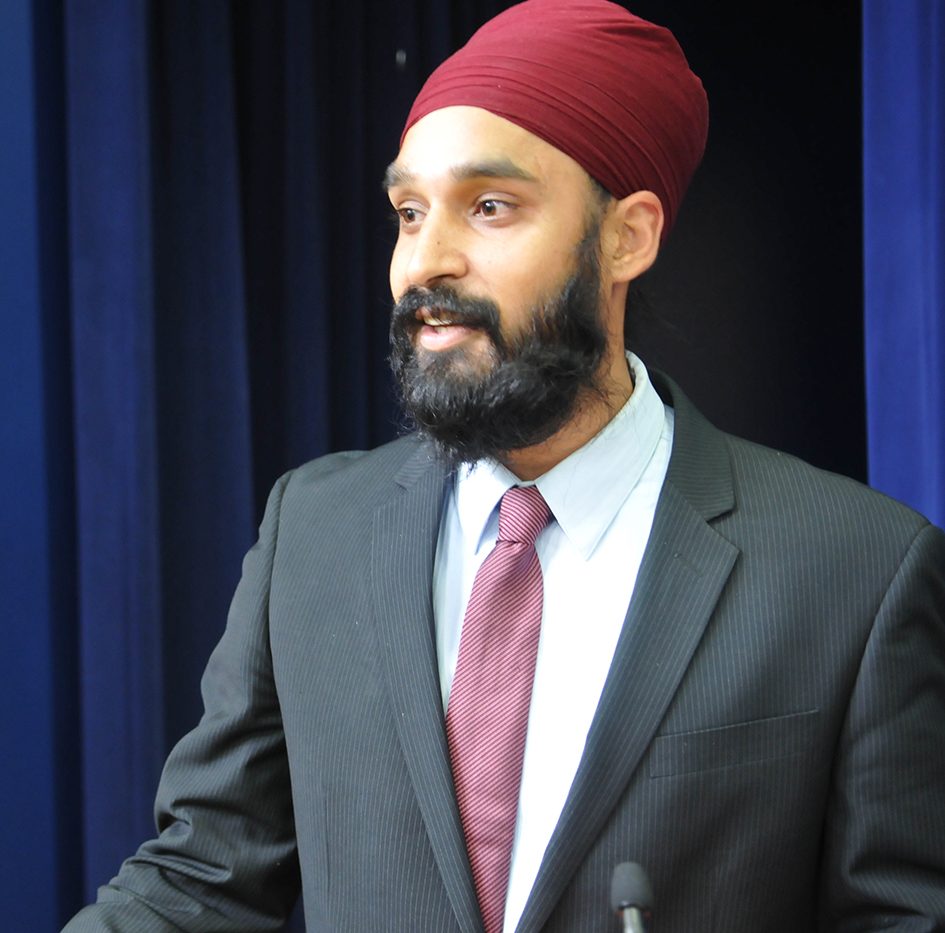 As assistant professor of religion at Trinity University and a 2018 Interfaith Leadership Institute keynote speaker, Simran Singh connects with America’s youth, both as an educator and observer.

His interactions, he said, give him hope for the future of America as a tolerant nation.

“I really take inspiration from the fact that young people today understand and confront discrimination in ways that I didn’t even see when I was their age,” Singh said. “That really gives me hope that as we move forward that we will have leaders coming up who can really address our deepest problems.”

Although Singh said he may not have recognized all discrimination at a young age, he now works every day as an award-winning activist and scholar to combat intolerance.

At 2 p.m. Friday, July 27, in the Hall of Philosophy, Singh will engage in interfaith dialogue with the Rt. Rev. V. Gene Robinson, Chautauqua’s vice president of religion. Singh, the Henry R. Luce Fellow for Religion in International Affairs at New York University, will represent Sikhism during the Institution’s fifth Interfaith Friday.

As the senior religion fellow for the Sikh Coalition and author of Covering Sikhs, Singh is devoted to sharing his religion with the nation.

But this responsibility does not always equate to peaceful dialogue and informative discussion. In his personal life, Singh has suffered from injustice based on his religion and culture.

“I was in high school when 9/11 happened, and so in so many ways, that event shaped my life and my worldview,” he said. “One of those ways was realizing that so much discrimination comes from ignorance. So I felt like educating folks and creating awareness was a real meaningful way to make a difference and make this world better.”

By channeling negative experience into activism, Singh has garnered recognition for his work. He has received numerous accolades, most recently the Presidential Excellence Award for Teaching from Columbia University.

But for Singh, he is simply following his faith tradition. One of the principal duties of Sikhism is “Vand Chhakna,” which literally means “sharing one’s earnings with others.” This can also more broadly translate to charity and caring for all people.

“Sikhism teaches us that there is a long history of injustice in this world, and part of our responsibility as people of faith is to stand up for and speak out for those who are at the receiving end of that injustice,” Singh said.

Though America is far from a perfect and peaceful nation, Singh said he remains optimistic for the future.

“Part of my outlook as a Sikh is to notice the positives,” he said. “That’s how we’re wired in this tradition, and that’s what I think allows us to continue in these seemingly dark moments. There’s always light and there’s always divinity in everything.”

For Singh, coming to Chautauqua for the first time for Interfaith Friday was an extension of his daily mission to build positive and accepting community connections.

“I’m very supportive of interfaith efforts, and I think it’s the way our society needs to move,” he said. “Any opportunity I have to be a part of some sort of cross-cultural, cross-religious intersectional dialogue — I always find that to be a powerful experience.”

Artist Kevin Cole will discuss career, what it’s like ‘to be a part of history’ for VACI Lecture Series