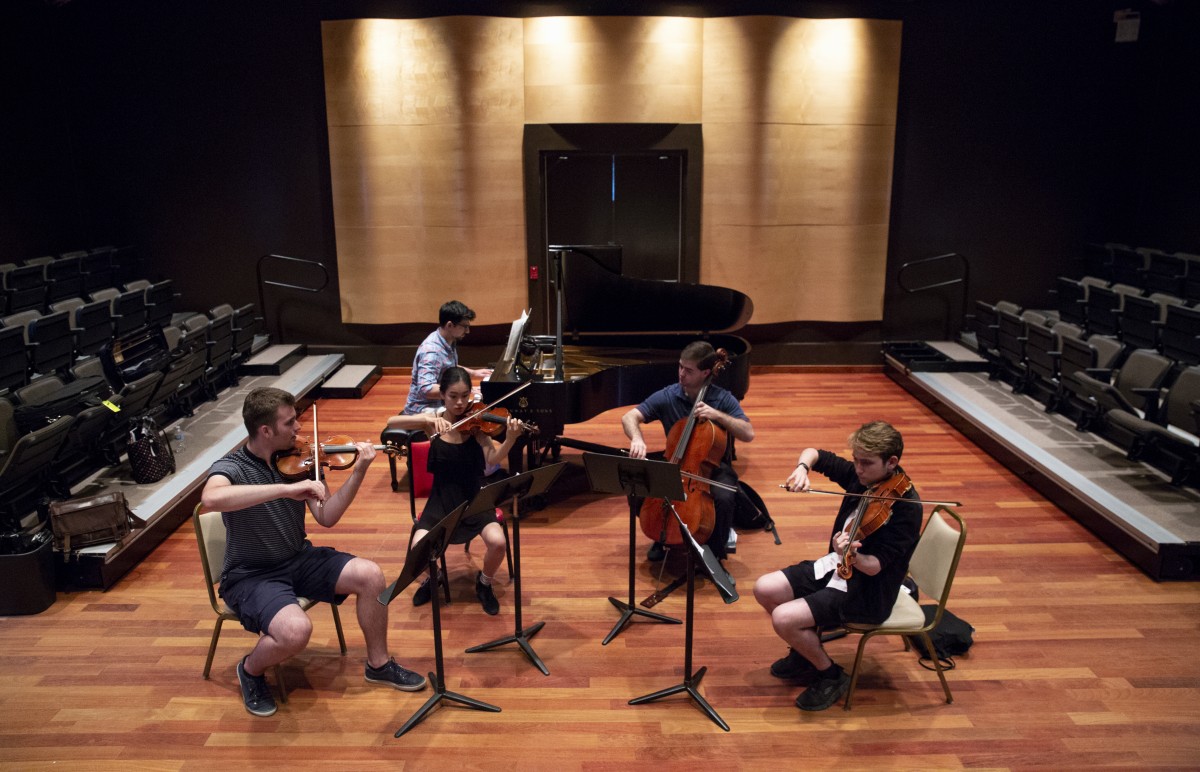 In Ann Arbor, cellist Arie Lipsky is the music director and conductor of Ann Arbor Symphony Orchestra. In Chautauqua’s School of Music, Lipsky teaches cello and is the chamber music chair, coaching students on how to work together for chamber music.

Chamber music began with several musicians sitting together and playing a small ensemble “in palaces” in Joseph Haydn’s time,” Lipsky said. He said it is called “chamber” because this type of music used to occur in “a big room.”

The first phase of student chamber music recitals will occur at 2 and 7 p.m. Thursday, July 19, in McKnight Hall, 2 and 6 p.m. on Saturday, July 21, and 4 p.m. on Sunday, July 22. All the recitals will be held in McKnight Hall, except the 2 p.m. vocal chamber recital on Saturday, which will be in Fletcher Music Hall. Lipsky and other faculty members have been coaching the students, who have been rehearsing on their own time for weeks now.

According to Lipsky, chamber music provides a larger scale of tones from high to low compared to solo music. And although orchestral music can do that as well — with even a bigger sonority and wider variety of tones and sounds — the intimacy of chamber music is what can’t be replaced by an orchestra.

“Chamber music is still a need because (the audience) appreciates the intimacy,” Lipsky said. “And the string quartet is just a perfect vehicle for composers to express themselves because it encompasses the entire tone from the high to low.”

Violin student Anna Berntson, who served as the concertmaster at the July 2 Music School Festival Orchestra concert, will be playing one of the violin parts in the Schumann Piano Quintet, op. 44 in today’s 2 p.m. concert. To Berntson, orchestra is like chamber music on a larger scale.

“When I’m playing, even in an orchestra, one of the things that I try to do is be a chamber musician all the time,” Berntson said.

“That’s where you are making eye contact with everybody in the group,” Berntson said. “You know what everyone’s personality is just from interacting with them through their playing, and you get everyone’s ideas firsthand.”

“The best orchestra is (made up of) people who play chamber music,” Lipsky said.

The reason is teamwork. Lipsky said musicians need to know how to listen, how to adjust in response to the people whom they are playing with and how to work within a group.

“(Playing chamber music) really educates you to be not only a musician, but I would say even a better person,” Lipsky said.

Lipsky said he tells the kids who do not have much music experience that their opinions are important; however, “there are some others’ opinions, too.”

“And sometimes, you have to refer to others who might have a better idea of the music, or discuss it and come to an agreement,” Lipsky said.

Compared with other music festivals, Chautauqua puts a heavier emphasis on student chamber music, according to Lipsky. Berntson said that she likes to do both orchestra and chamber music intensely at Chautauqua.

Nevertheless, things don’t always go that well. Lipsky said there are quartets who played fantastically together but couldn’t stand one another.

“The Budapest Quartet used to travel in different trains in Europe to concerts because they have been working together, but they didn’t like each other,” Lipsky said. “And I tell (my students), you might find your best friend for life, even your spouse, you never know, because this chemistry is invigorating — or you might find somebody that you can’t stand. But it will be over in two weeks.”