Music School Festival Orchestra is made up of students who are pre-professional young musicians. And what’s special about tonight’s concert is that a student conductor will be participating as well. 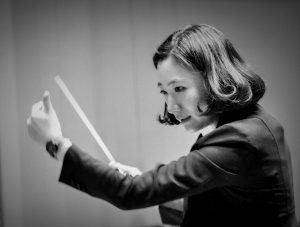 Members of the MSFO spent a week getting to know one another and learning to work together as an orchestra; now, they are faced with another “quick turnaround” of working with a new conductor. But Garrett Lindholm, a trumpeter in the MSFO who has a solo in the Prokofiev piece, said that every time “we do something, it’s usually the first time we’ve done it. It’s fresh, and we’re all just trying to figure stuff out. I feel like if you do it right, you go big. And you put everything out there.”

“She’s excellent. But that does add in another level, too; she is a student conductor. She’s learning how to do this with us,” Lindholm said, “and we are trying to communicate with her. And she’s doing a fantastic job. I can’t say that enough; we’ve all been really impressed with her.”

Lindholm said he thinks that one day, Bao will be on the conductor’s podium in Philadelphia or Boston, so “in the back of my mind, I’m going to say ‘Oh, I’ve worked with her when she was just starting out.’ … It’s really exciting to be able to see that in the future, and be here for it, too.”

Muffitt, who is mentoring Bao, asked her to choose between the Fauré and the Prokofiev to rehearse and conduct with the MSFO. She chose the Prokofiev.

Prokofiev scored the music for “Lieutenant Kijé,” one of the first sound films ever made in Russia. Kijé is the protagonist, but he’s more than just a fictional character in a fictional movie. Even in the movie itself, he doesn’t exist at all.

The character Kijé is completely made up in a lie to the Tsar, according to Lindholm, who said the plot satirizes those who are afraid of their superiors. In the movie, an army clerk makes a mistake, and in reporting the mistake, writes in “Kijé” instead of his own name. The tsar asks more about “Kijé,” and instead of fixing the lie, the army clerk just kept telling more and more lies: pretending “Kijé” is a real person, eventually jailing him, releasing him, then reporting him dead and finally, staging a funeral with an empty coffin.

“It’s comic, but also tragic, and also has the sense of humor and romance with an underlying melancholy,” Bao said. “It really has the dimension of all the characters. You can see the details in (Prokofiev’s) writing. … The articulation is very detailed to notes. And even after two notes, three notes, it has changed.”

Bao said she loves the abundant characters in the Lieutenant Kijé Suite, which is only 20 minutes long.

“What I’m really, really trying to do is bringing out the characters in this piece, which are very vivid,” she said. “I want to really show the dimension of the characters. Even if you don’t know the plot, at this point (in the music), you will smile. And at that point, you will get a sentimental feeling. I want to make the music alive.”

Julian Velasco, a recent graduate from Michigan State University who is here at Chautauqua for a week of rehearsal and tonight’s concert, will be playing a tenor saxophone solo in the Prokofiev piece.

Velasco said his instrument was invented in the 1840s, so “we actually missed out on a lot of huge composers’ orchestral works.”

“Most of my interjections are kind of the darker sounds of the piece. I have a lot of the somber melodies. … The Russian style of music often has a dark undertone,” Velasco said, “so even in some of the happier movements, I often come in with the dark, mysterious melody.”

Jack Henning, a bass player with a solo in the second movement of the Kijé, said in this concert, “a lot of other people have solos, but it’s notable because it’s a bass solo, and it doesn’t happen very often.”

“I love (the Prokofiev piece). … It’s so great to play this solo because it’s just a very beautiful solo,” Henning said. “But the piece is kind of interesting. It’s a very quirky kind of piece. And Prokofiev is known for having some goofy moments in his pieces.”

The main thing Henning worked on for his solo is making it sound as beautiful as he can. Because it’s from a film score, he envisions it as someone singing.

Rachmaninoff’s Symphonic Dances, which, in Muffitt’s words, is an “immensely difficult” piece for the MSFO students, is the piece that he chose first when he put the MSFO repertoire together.

“It’s a great piece for the exceptionally gifted students to encounter while they are still students before they are thrust into the demands of the professional world,” Mufitt said.

Mufitt’s two priorities in terms of selecting pieces for the MSFO are for every musician to be “significantly involved” and to select pieces that can “play into their growth as young professionals.”

“The Rachmaninoff Symphonic Dances meets a number of needs for the MSFO,” Muffitt said. “First of all, it’s extraordinary music. It is a very demanding work that is at the core of our repertoire.”

Additionally, Muffitt said Symphonic Dances is a “piece that (the MSFO musicians) will encounter many times in their careers as orchestral musicians.”

Velasco will also have a saxophone solo in Symphonic Dances.

“I introduce the (second primary theme), and then the orchestra takes over for the rest of the piece,” Velasco said. “But I think it … depicts how gorgeous the saxophone can sound, and his writing is just phenomenal. And it is one that saxophonists look forward to having the rare opportunity of performing.”

Muffitt said Symphonic Dances is the hardest piece in tonight’s concert, so if one work is particularly demanding, he wants to make sure the other works don’t require as much rehearsal.

“The Fauré will not require nearly as much rehearsal and so, we’ll have time to focus on Rachmaninoff and Prokofiev,” Muffitt said.

Muffitt said that although it might seem that Faure’s piece is “another completely different style,” influences of the French composer can be heard in Symphonic Dances.

“(Rachmaninoff, a Russian composer) was clearly influenced by the late 19th-century French composers,” he said. “So I wanted to put one in there for that reason.”

The Prokofiev, on the other hand, “ fits in nicely because here is another Russian composer in the 20th century, but coming from a very different place from Rachmaninoff,” according to Muffitt. He said Rachmaninoff was “really very much a Romantic and late romantic composer, and Prokofiev was from the modern era.”

“All of these pieces come from a very close historical proximity, yet they are completely different, (stylistically). … But mostly, they are just three great great pieces of music that this orchestra will really shine playing them.”

Play and culture: more closely related than society may think