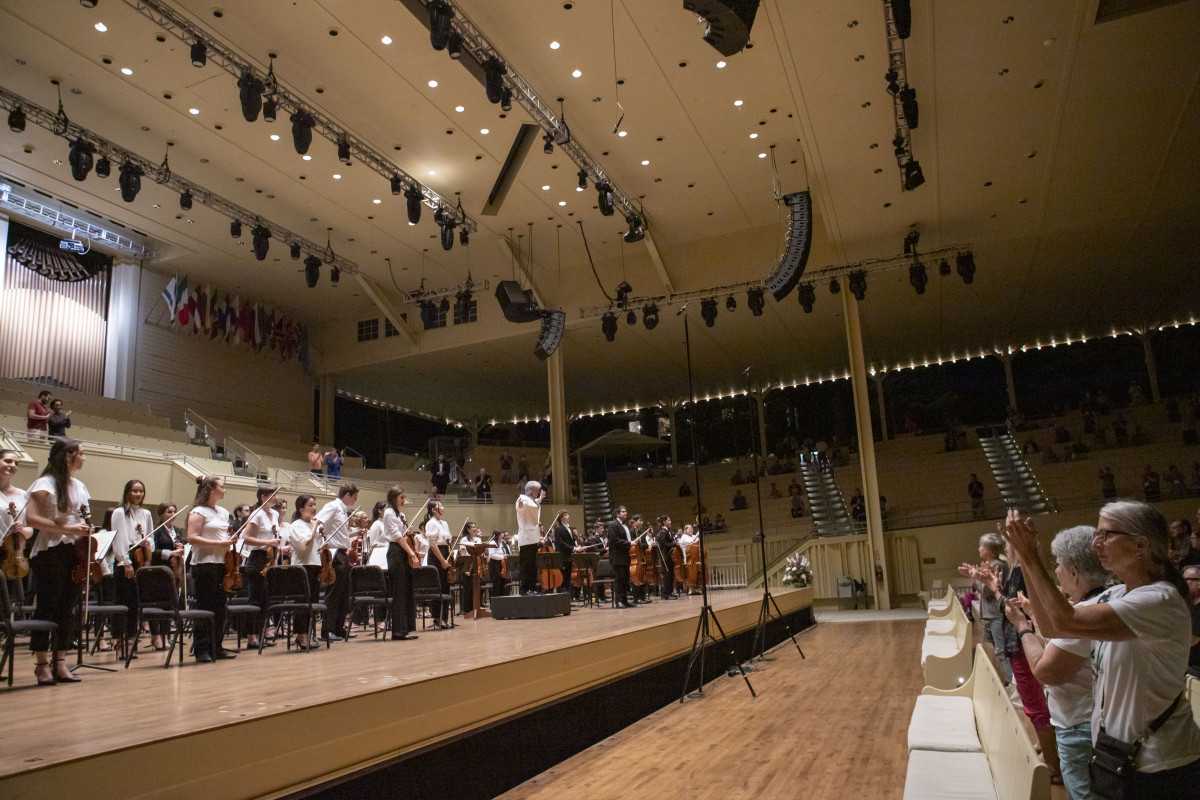 Crescendoing into its final performance of the season, the 2022 Music School Festival Orchestra will soon watch the flick of Maestro Timothy Muffitt’s baton for the last time. The MSFO will present its final ensemble performance at 8:15 p.m. tonight in the Amphitheater.

“(There’s) always a lot of emotions,” said Muffitt, the School of Music’s artistic director and MSFO conductor. “There will be a great sense of satisfaction that we’ve completed this, but at the same time, I’m always sorry when it’s over, because it’s a very special environment for music-making.”

Sarah Malinowski-Umberger, manager of the Schools of Performing and Visual Arts, described the season’s end as “bittersweet — it always is.”

The 80-plus musicians in the MSFO have completed a monumental amount of work throughout the past eight weeks, including meticulous training, numerous performances in the Amp and other musical activities.

“The learning curve is steep,” Muffitt said. “We dive right in headfirst and we grow a lot with every rehearsal. There’s really no stagnation. … We will do things on Monday night that we would not have been able to do earlier in the summer.”

Beyond the rigorous nature of the program, the MSFO has had to navigate COVID-19 scares with the mentality that the show must go on, as long as it is safe to do so. Last week’s collaboration between the Chautauqua Opera Conservatory and the MSFO for The Cunning Little Vixen required last–minute tailoring due to people in key roles testing positive with COVID-19.

“The opera we just did … was immensely challenging in just about every regard. Just the demands on the individual in that work are huge, (for) the singers, the orchestra, the conductor, the coaches and everyone that was involved in it,” Muffitt said. “… And I think that was a remarkable coming together and a huge success.”

With the last-minute changes, Muffitt said he was proud of the way everyone involved rose to the occasion, as “this is the performing arts in 2022.”

Calling the resilience of the MSFO and faculty members inspiring, Malinowski-Umberger said each MSFO performance was a highlight in its own right.

“Each of their concerts were so different and spectacular,” Malinowski-Umberger said. “… These students came here to work hard and learn; their performances speak for themselves.”

As the students prepare for their departure from the grounds, clarinetist Victor Battista said the high-intensity season has helped him grow as a musician.

“At these festivals, you can feel like you’re under a pressure cooker, because you have to learn a lot of repertoire in such a small amount of time,” Battista said. “It has brought to light to not be so hard on myself when learning things that quickly … (and) that the more I do something, the better I get at it.”

The orchestra only rehearses together for six days before each concert, with each rehearsal lasting two-and-a-half hours. This speaks to the fast-paced nature of being a part of the MSFO.

While in this program, Battista has spent the season exploring the e-flat clarinet, which is a smaller version of the standard clarinet.

“I haven’t had much experience with it before,” Battista said. “… It’s really cool because I get to play the e-flat in this last concert, so I think it really puts to light the work that I’ve put in on that auxiliary instrument.”

Prokofiev’s Symphony is a colossal work that involves all of the players in the orchestra, and Muffitt calls it extraordinary.

“It’s also a great piece of music for this time that we’re in now,” Muffitt said. “It was written during World War II, and somehow in the middle of that human tragedy, Prokofiev found a voice of optimism.”

Simon is a living African American composer, whose work reflects on his heritage. His work also serves the present moment in its quality and storytelling abilities.

“It’s a piece that is today. It’s music of our time, and it’s vital,” Muffitt said. “Just another wonderful work for the orchestra to sink its teeth into.”

Erin Hennessey, a MSFO violinist from Ireland, is looking forward to performing both of these pieces on closing night.

“I’ve never played either, and I’m really looking forward to both,” Hennessey said. “But I am most excited for Prokofiev’s. It is really fun (to play).”

Nearly everyone involved with the MSFO wants the audience to feel the same sense of exhilaration and completion as they will feel while they perform.

“They sound incredible,” Malinowski-Umberger said. “Everyone will be blown away.”

Hoping to provide an escape for audience member’s day-to-day lives, Battista said he hopes that they will recognize how valuable art is in the form of orchestral music.

“I think (presenting music while helping others to put aside their problems) is one of the most valuable things we can do as performers,” Battista said.

Hennessey wants the audience to feel inspired and feel the energy vested within the cohort of students.

“I hope they can share the excitement that we’re bringing to the performance,” Muffitt said. “… I hope the audience can tap into that with us. I hope they feel uplifted by it (through) a dose of hope, optimism and joy.”