“Not all is doom and gloom,” Roger Tory Peterson once said. “We are beginning to understand the natural world and are gaining a reverence for life — all life.” It is this understanding and appreciation that has driven Twan Leenders, president of the Roger Tory Peterson Institute of Natural History, to continue Peterson’s legacy. 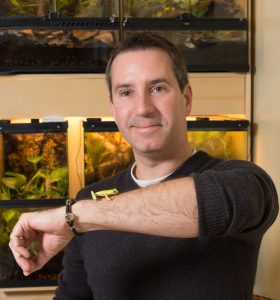 Leenders will discuss the local ecosystem, focusing on rare and endangered species at 6:30 p.m. Monday, July 23, at the lakeside porch of the Youth Activities Center as one of the Bird, Tree & Garden Club’s Lake Walks. In this unique habitat at the head of a massive watershed, Leenders will emphasize the importance of understanding how precious the resources at Chautauqua are.

“We’ve got the best of the best water here,” Leenders said. “Any kind of pollution we’ve got here, we really can’t blame on anyone else but ourselves.”

In a small county, about the size of Rhode Island, Leenders said he thinks it is easier to become focused on local resources. An immense number of species found in limited numbers or rapidly declining nationally may be doing OK in Chautauqua County — even thriving, in some instances.

“When I first came to Chautauqua a few years ago, I started seeing all of these unusual species that, in my professional study, shouldn’t have been here in such great number, or been here at all,” Leenders said.

Born and raised in the Netherlands, Leenders spent the majority of his career as a conservation biologist studying declines in amphibian and reptile species in Central and South America. Leenders worked in impoverished areas where governments needed help with resource management and conservation, including Ecuador, Nicaragua and parts of Africa.

Leenders eventually came to work in the United States as a conservation expert with Yale University before becoming a college professor. After meeting his wife, who grew up in Chautauqua County, he began visiting the area and was blown away by the diversity.

“I was scrambling to preserve ‘ones’ and ‘twos’ of some species in Connecticut, when there’s dozens of them here,” Leenders said.

“My impact could be so much bigger here.” Leenders said it’s almost surreal that he wound up working at the Roger Tory Peterson Institute because Peterson had such a huge influence on him from a young age.

“My very first field guide I bought from my hard earned allowance money was actually Roger Tory Peterson’s field guide to birds of Western Europe,” Leenders said. “It’s really fascinating that I find myself doing the things I am now.”

Despite recent public concerns with the health and quality of the ecosystems at Chautauqua, Leenders said certain local species are a reminder of the surrounding rich environment. Bald eagles, ospreys and spiny softshell turtles are a few examples of the species endangered, or in decline, elsewhere that find their home in Chautauqua County.

Near the edge of the region where softshell turtles might be found, Leenders said the number of turtles around the lake is quite staggering.

“The fact that you can have a foot-and-a-half diameter turtle buried in the Chautauqua Lake mud for eight months, that indicates the oxygen needs here are really good,” Leenders said.

Because of the decadeslong lifespan of the turtles, Leenders emphasized the long-term understanding this species can give conservationists.

“Any kind of impact we have on these turtles now, we may not see until further down the road,” Leenders said. “They really give us a chance to look at the environment over a long period of time.”

Not all species Leenders works to study and preserve are as flashy or well known as the turtles, bats or bald eagles. For example, bryozoan colonies have been seen in vast numbers around the lake. These gelatinous masses are, according to the Bureau of Integrated Science Services, “entirely colonial organisms consisting of many similar connecting zooids,” with most freshwater species appearing in states bordering the Great Lakes.

“They’re not panda bears or polar bears,” Leenders said. “And they’re extremely sensitive to pollution, serving as tangible reminders that not everything is bad around here.”

In his career research and field guides, Peterson brought natural study to the masses, opening people’s eyes to the world around them, Leenders said. In doing so, people like Leenders have worked to find and preserve the “treasures” of the natural world just waiting to be discovered.

“People just don’t want to see what’s going on around them anymore,” Leenders said. “Even though we’re simply talking about local issues here, these are issues everyone’s facing. I think it’s important to get the information out so that it can spread.”