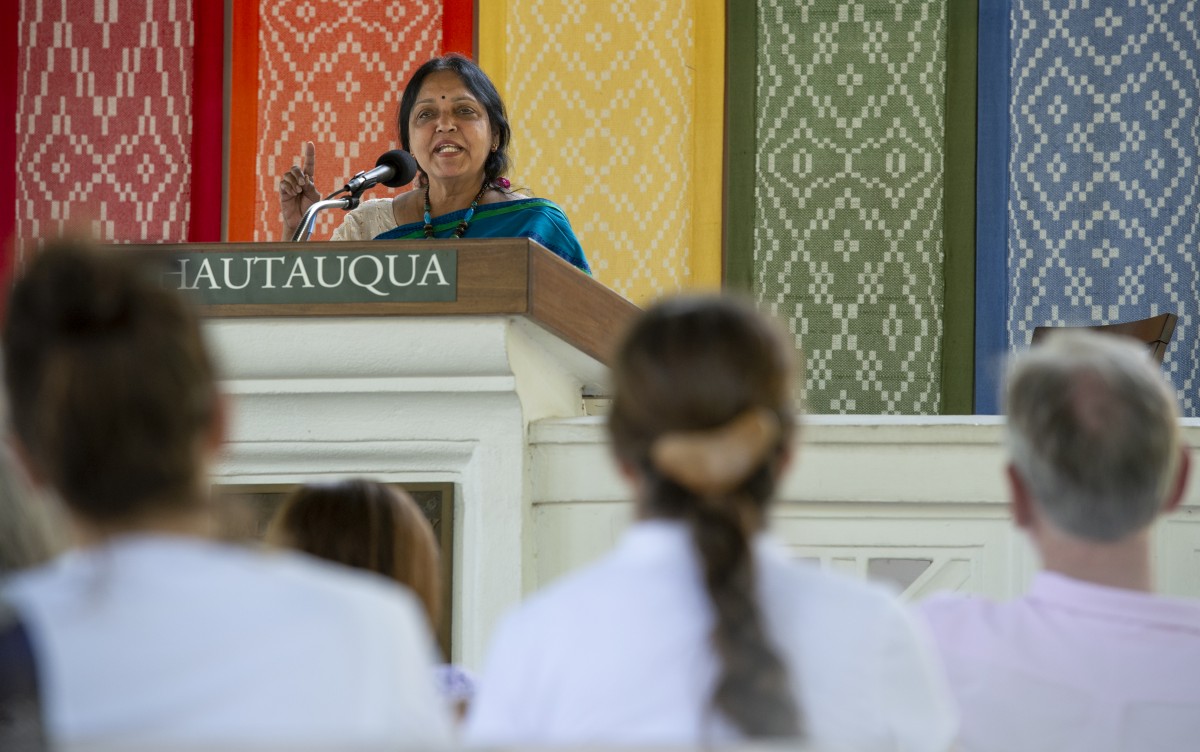 In the third edition of the Interfaith Friday series, the Rt. Rev. V. Gene Robinson, vice president of religion, moderated a number of questions for Vasudha Narayanan, a Hindu and interfaith advocate at 2 p.m. Friday, July 13, in the Hall of Philosophy.

Narayanan is a distinguished professor in the department of religion at the University of Florida and a past president of the American Academy of Religion. She was educated at the universities of Madras and Bombay in India, and at Harvard University. Her fields of interest are the Hindu traditions in India, Cambodia and America; visual and expressive cultures in the study of the Hindu traditions; and gender issues.

What follows is an abridged version of Narayanan’s conversation. Narayanan and Robinson’s remarks have been condensed for clarity.

Narayanan: I think the basis of this is understanding each other, and that can come in multiple ways. The word “faith” here itself is something I think we should flag because it is a very Protestant word, a very Catholic word, when you think about it. How we dialogue faith is the question, and most Hindus would prefer action. So when we talk about interfaith, we talk about our beliefs, our world belief, and that is primarily the Abrahamic belief system. There are multiple belief systems, so when you have interfaith dialogue, those faiths that we are dealing with, (each religion has its own perspective), and there are many theistic and nontheistic structures as well. So, the word “interfaith,” I would say, changes as to what is the content about. It is extremely important to understand each other, and some of you would understand that that’s why we are here. We need to know each other, not just you, more deeply. What is it that makes you tick? What is it that makes you? That could be in different ways, and in the Hindu tradition, we do not believe in God as a past form. Where I come from, we believe that the Supreme Being has a form that he or she takes to come to the temple to make itself accessible to us. That I think is a very nice view for us to start (from) because all of us in this day and age want to give back to this universe, (to know) that it matters, that we can’t just come here, trash the earth and move on. So we can assume that the basis for interfaith dialogue, why you are all here today, is to get to know each other. But we need a space and we have to make that space, and Chautauqua is one of those places. It is where we come together to talk without anger. When I think about a detachment, I do not think being withdrawn. I mean speaking without being angry but still with passion.

When you come to the metaphorical interfaith table, what gifts do you bring as a Hindu to that table?

Narayanan: The one thing I really want to stress here is the diversity of all of our traditions, so when I say what is mine, I am sure you can look back at yours and see it there, too. To say that these are the gifts that Hinduism brings to the table is not to say this is unique to us. It’s not, it is something we have valorized or something here that I have appreciated in my own way. One (thing Hinduism brings) is a sense of infinity that I had come to way back when. Historically speaking, it was in India that the concept of zero came up, and that means people who could talk in huge numbers. One (number) followed by 17 zeros became a number which they used to speak about the cycle for the large creation of time and then the creation of the universe would be cycles within cycles stretching the human and divine years. It makes you ask yourself what your place is in this universe. I feel that this sense of your place, which has been emphasized over and over again in the Hindu tradition, is important, but only when knowing (no matter the issue) the other side of the coin would still say your life matters. It is the only life we have right now, so give it this hugeness and vastness the universe defined in the way that every one of us is reborn over and over again. This matters. You do good now.

The thing that most reminds me of that concept is a practice that we do every day in Hindu households. We wash the outside threshold, the outside porch and make a drawing called a mandala with rice our so the little insects can eat off of it. They draw huge designs outside, but then within 10 minutes a car will drive by, a bike will go by and kids will play and there will be nothing. But they will do it all again the next day because it doesn’t matter that it lasts for 10 minutes. It is beautiful. It becomes a part of what you created and those who behold it even though it is so temporary. Oh, and the (tradition of) food. Hinduism is all about food. Forget everything I told you about Hinduism, it is only about food.

Narayanan: Every tradition says that, but whether the followers take that literally is the question. How does it function on the ground? Do people pick up the scrolls and say, “This is all there is”? No, of course not. So it depends on how you interpret it. I think by and large, people have been more metaphorical in their interpretation of these statements. Because the Lord’s form is the entire universe, everything is included in that. Places where you can understand that, like here in Chautauqua, that becomes your church. That speaks to you in levels that we can’t understand.

Do you have extremist practitioners of Hinduism?

Narayanan: The story of extremism is present in all human beings, right? We can’t blame any one group of religion for having that. That is important for all of us to remember. I think Gandhi and many others said for every finger pointing outward, three point toward you. So yes, we have extremists, but how many people in India, or the in the world, relate to them is the problem. On the whole, violence is about, but then you get historical claims (about extremists), even the more modern people are swayed. When you bring government policies to flame, this fury, it is even worse.