At 8:15 p.m. Monday, July 16, in the Amphitheater, the popular public radio show series, “Selected Shorts,” will present a variety of Russian texts onstage for an evening of entertainment, literature and performance arts. Established in 1985, “Selected Shorts” is now also a nationally popular podcast and is produced by New York’s Symphony Space.

Atom Atkinson, director of literary arts, said the program is an “ideal way to kick off a dynamic” week exploring the theme, “Russia and the West.”

“By bringing canonical and contemporary Russian writers to life so vibrantly, ‘Selected Shorts’ is gifting us a rich context for all of it, and the actors’ renderings will resonate again and again,” Atkinson said. 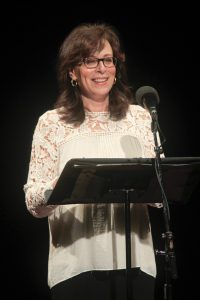 The host for Monday, July 16, will be Golden Globe-nominated actress Jane Kaczmarek, known for her role as Lois on “Malcolm in the Middle” which earned her seven consecutive Emmy nominations. She has appeared in works on-and off-Broadway, such as Our Town and Long Day’s Journey Into Night.

Kaczmarek will be joined by “Selected Shorts” regulars, Sean Cullen and Peter Francis James. Cullen is perhaps best known for appearing alongside George Clooney in the Oscar-nominated film, “Michael Clayton.” He has recently appeared in the “House of Cards,” “Suits” and “The Sound of Music Live!” on NBC.

The narrator of over 60 audiobooks, James has appeared on Broadway in multiple productions, including Present Laughter and The Merchant of Venice. James also works in film and television, having worked on shows such as “Gossip Girl” and “Royal Pains.”

The setlist for the evening performance includes four Russian texts, new and old.

First up is “Will-Power” by Teffi, the pseudonym for humorist Nadezhda Alexandrovna Lokhvitskaya born in St. Petersburg in 1872. After the October Revolution of 1917, she fled to Paris, where she continued to write. Cullen will perform “Romance with a Double Bass” by the iconic 19th-century Russian storyteller Anton Chekhov, known for The Seagull and the dramatic principle of “Chekhov’s gun.” Next is “Quadraturin” by the prolific writer, Sigizmund Krzhizhanovsky.

And finally is a contemporary selection, “Salad Olivier” by Lara Vapnyar, who teaches creative writing at Columbia and New York universities. She is the author of Memoirs of a Muse and Broccoli and Other Tales of Food and Love.

“The evening with ‘Selected Shorts’ is a perfect Chautauqua fit as it celebrates the performing and literary arts as presented on the stage of our celebrated Amphitheater,” said Deborah Sunya Moore, vice president of performing and visual arts. “I am particularly excited that it will be recorded for national broadcast so that this Chautauqua experience will resonate across the country.”