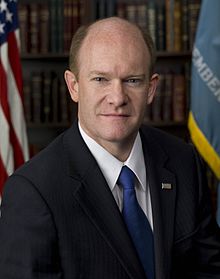 On Wednesday and Thursday, July 11 and 12, President Donald Trump met with European leaders at the NATO summit in Brussels, where he accused Germany of being a “captive of Russia.” On Monday, July 16, in Helsinki, Trump is expected to meet with Russian President Vladimir Putin. And at 10:45 a.m. Monday, July 16, in the Amphitheater,  will open the morning lectures for Week Four, “Russia and the West.”

In his first visit to Chautauqua, the Democratic senator will lay out a “comprehensive vision for the U.S.-Russia relationship,” according to Thomas Mancinelli, Coons’ foreign policy adviser. Mancinelli said the relationship between the two countries is one that extends far beyond the events of the 2016 election.

“There’s a lot of different aspects of (that relationship) that are important to Americans,” Mancinelli said. “Part of that, though, starts with recognizing that we’re at a low point in U.S.-Russia relations as a result of President Putin’s own efforts to undermine our own democracy in an attempt to divide us as a country, to divide us from Europe and to divide European society from within.”

Mancinelli said Russia has been working to “sow discord and create chaos in democracies around the world” as early as 2007, and Coons will discuss some of the circumstances that have led the Kremlin and Putin to “wage this campaign of informational and hybrid warfare.”

Coons, the junior senator from Delaware, has been an outspoken advocate for policies that “counter Russian aggression and subversion,” he said in a February talk he gave at the Hudson Institute. Although Mancinelli said the lecture will not specifically address the ongoing investigation into Russia’s alleged interference in the 2016 election, Coons has previously spoken out against the president’s relationship with Putin.

On July 8, Coons told CBS’s “Face the Nation” that he is “very concerned about things (Trump) might give away or say with Vladimir Putin” at the expected Helsinki summit today.

The president told reporters last Thursday that he will raise the subject of Russia’s alleged interference during his meeting with Putin.

Coons is the vice chair of the Senate Select Committee on Ethics and a member of the Foreign Relations, Judiciary, Appropriations and Small Business and Entrepreneurship committees. In those roles, he frequently works with Republican members of the Senate to create bipartisan legislation. In April, Coons co-sponsored a bill that would limit the president’s ability to fire any special counsel through the use of an “expedited judicial, review” to determine if the proposed termination was for a “good cause,” according to The Hill.

Most recently, Coons was part of a bipartisan delegation to northern European countries that share borders with Russia to discuss their concerns about U.S.-Russian relations.

“I’ll remind you last month in Quebec at the G7, President Trump picked a whole lot of fights, particularly with Canada,” Coons told “Morning Joe” on July 9, “and for us to be facing a trade war with China and at the same time have President Trump be picking fights with our key allies in Europe and North America, strikes me as just nonsensical, and many Republican senators feel the same.”

Mancinelli said Coons frequently works with Republicans like Florida Sen. Marco Rubio and South Carolina Sen. Lindsey Graham, as well as other Republican officials who see the Russian threat with “clear eyes.” Mancinelli said this approach is crucial for developing a “pragmatic analysis of how we can go forward and improve the (U.S.-Russia) relationship.”

“Whether you’re Republican, Democrat, American, European or Russian, if we all understand one another’s perspectives and backgrounds, we can use that as a basis for developing an informed, bipartisan strategy going forward,” he said.

Matt Ewalt, Chautauqua’s chief of staff, said the Institution is excited for Coons to set the stage for Week Four with suggestions for how “we as American citizens … can ultimately serve an important role in bringing this relationship to a constructive space.”

“Coons is widely praised for his pragmatism, working across the aisle and finding common ground with his Republican colleagues,” Ewalt said. “It’s this commitment to talk across differences that gives us confidence that he’ll find the Chautauqua community and experience both personally enriching and a valuable model for community discourse.”