Documentaries on bands or artists often involve pulling back the veil of mystique and revealing truths. In the case of “May It Last: A Portrait of the Avett Brothers,” viewers simply get a clearer view of the truth the sibling-led group was already sharing with the world. 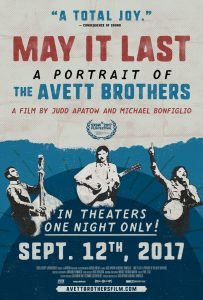 Helping to kick off Chautauqua’s Food & Film Festival for Week Nine, the documentary will be shown at 2:30 p.m. Sun., Aug. 19, in the Amphitheater. The documentary, directed by Judd Apatow and Michael Bonfiglio, will act as a sort of preview of the Grammy-nominated group before they perform at 8:15 p.m. Mon., Aug. 20, in the Amp.

The documentary takes an in-depth look at the Avett Brothers, from the group’s beginnings in rural North Carolina, where founding members (and brothers) Scott and Seth Avett still live down the street from each other. From those origins, the film follows the band’s production of its 2016 album, True Sadness, culminating in the group’s debut at Madison Square Garden.

Contrary to so many sibling and family-centered music groups, a striking distinction made clear in the film is what sets the Avett Brothers apart. Legendary record producer Rick Rubin puts it simply.

“They like each other,” Rubin said in the film.

Linda Holmes at NPR described this collaborative method in a January film review.

“It’s a music story, but it’s also a story of families, both born and made,” Holmes said. “And it’s a story of creative collaborations inflected through close relationships, and the way that doesn’t always have to mean turmoil, as it often does in musical histories.”

Directors Bonfliglio and Apatow had collaborated previously on a film for ESPN’s “30 for 30” series, “Doc & Darryl.” When Rubin called Apatow to ask him about making a film covering the Avett Brothers and their upcoming album, Apatow told Consequence of Sound that he immediately called Bonfiglio.

“Usually, if something doesn’t exist, I just think, ‘Oh I wish there was an Avett Brothers documentary,’ because that would be the first thing I would download,” Apatow told Consequence of Sound. “That’s usually the driver, but sometimes that happens because it is a moment before a moment.”

The film dives into the lives of the two brothers, the bond that blossomed between them over time and the familial bond that connected them with others in the group as time went on.

A scene plays out outside Rubin’s studio in Malibu after practicing the song “No Hard Feelings,” when the brothers are forced to take a moment to themselves and address the emotions of the track. After the director asks Seth Avett about the song, Scott Avett discusses the conflict he feels in taking these emotions and transforming them into hit songs.

“It just makes me equate it to, ‘Congratulations, you’ve sacrificed deeply and the evidence of that struggle has come out with something beautiful,’ ” Scott Avett said. “That’s a good way of looking at it, I guess.”

The film premiered at the 2017 South by Southwest Film Festival, where it received the 24 Beats Per Second Audience Award.