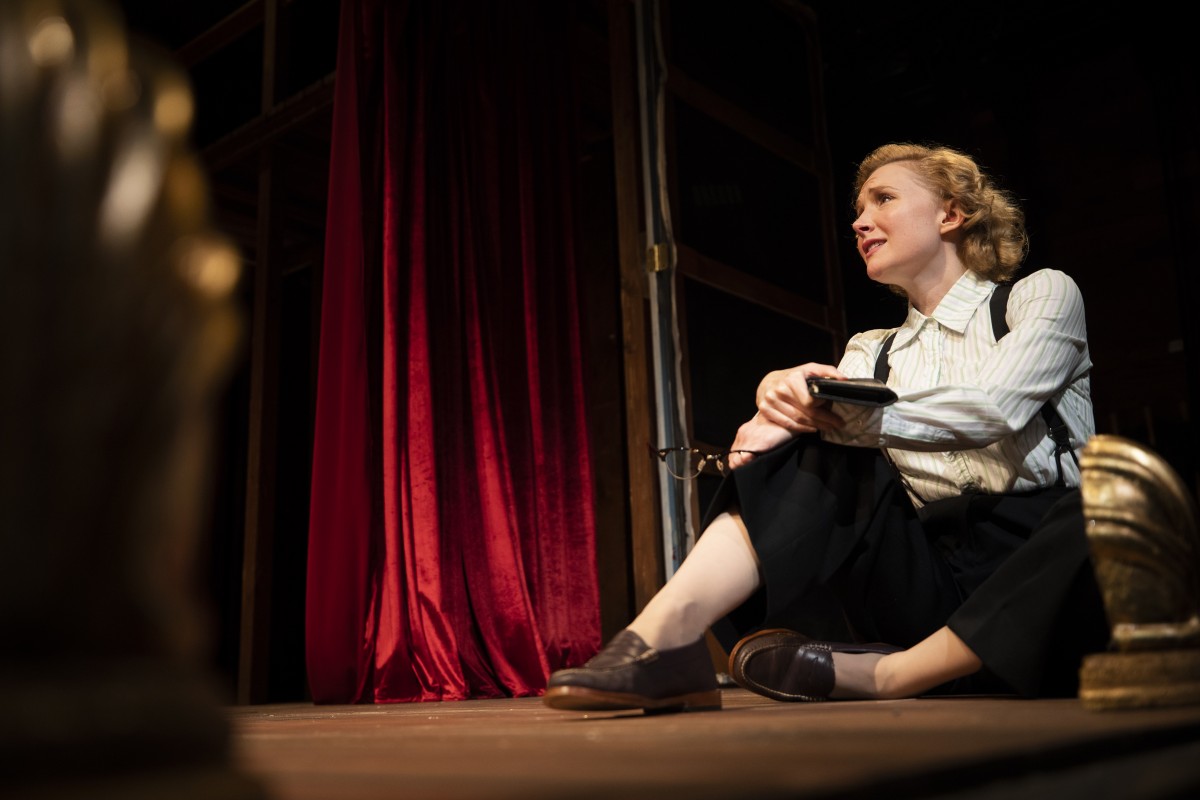 Chautauqua Theater Company guest artist Nisi Sturgis as Maggie Dalton acts out a scene during a dress rehearsal for 'Into The Breeches!' BRIAN HAYES/STAFF PHOTOGRAPHER

In the spirit of Week Eight’s theme, “The Forgotten: History and Memory in the 21st Century,” Chautauqua Theater Company is dusting off the World War II stories that are left out of textbooks.

CTC Artistic Associate Sarah Wansley said Into the Breeches! shines a light on the struggles of women, African-Americans and LGBTQ people who supported the war effort in less obvious ways.

“The play is really about the World War II stories you don’t hear,” Wansley said.

At 12:15 p.m. today in Bratton Theater, historians Michelle Henry and Rolland Kidder will join Chautauqua Institution Archivist Jon Schmitz for a Brown Bag titled “WWII Stories,” which will give Chautauquans a platform to share their own family stories with the community. Later, theatergoers are invited to return to Bratton for the 7 p.m. performance of Into the Breeches!, a new play about women coming together to stage Shakespeare’s Henriad.

The Brown Bag’s panel will also include David Watson, a Mayville resident whose family was recently reunited with a 1944 letter to his late uncle, James Watson. Although she is unsure how the letter arrived in CTC’s possession, properties master Hyla Sue Stellhorn found the historical artifact and tracked down its rightful owner.

“People thought I was silly, spending the entire day researching this family that I don’t know because of a letter we found in a filing cabinet,” Stellhorn said. “I was really happy that (Watson) was as excited about it as I was. He was surprised to hear that his dad was ‘wolfing’ around because he said his father was pretty straight-laced.”

With permission from Watson, the letter’s contents are displayed on Bratton’s porch. Wansley said Watson’s aunt’s description of the family’s activities, from icing a cake to getting a haircut, is another untold war story.

“This letter is a beautiful encapsulation of what was on the minds of families at the time,” Wansley said. “It’s fascinating for us now to think about … what it was like to sit down and write a letter and know that it might not reach your loved one for a couple weeks, and to wait for those letters to return seems especially powerful.”

The use of local stories is not limited to CTC’s props department. Playwright George Brant incorporated other World War II stories by making changes to his script.  Originally written to take place in Rhode Island, the CTC production of Into the Breeches! is instead set in Buffalo, New York.

“The idea going forward is that if a theater wants to do the play, they can either keep it the way it’s written and keep it in Providence, or if they’d like to, they have my permission to change the locale to the local locale,” Brant said.

“Recently, it came out that they were building a prototype of the (WWII) drone actually over in Jamestown,” he said. “That, unfortunately, I couldn’t work in because it sounded too anachronistic, even though it was true.”

Historic research was also important to the designers of Into the Breeches!. For example, costume designer Angela Calin and scenic designer Robert Mark Morgan mimicked actual theater companies of the era. Lighting designer Masha Tsimring said she was inspired by a lot of the lighting on the grounds in 2018 — excluding the fluorescent glow of art galleries.

“Conveniently, here at Chautauqua there’s been a lot of preservation of lighting from another time, which makes me very happy,” Tsimring said. “That sense of place and time, on a subconscious level, I’ve tried to preserve in (Bratton) as we work with the set design to create this world.”

Although not all his dramaturgy made it into the show’s final soundscape, sound designer Rob Kaplowitz said he explored both American and GermanWorld War II propaganda and music.

“We talk a lot today about false news or creating a fake narrative as if we just invented that idea, but one of the things that I was fascinated by that I wanted the cast to hear was the ‘Axis Sally’ propaganda,” Kaplowitz said. “The Germans in their propaganda division would create songs that sounded like 1940s American pop tunes that basically, quite suddenly for the time, played on prejudices and biases.”

Kaplowitz said Into the Breeches! uses plenty of “frenzied jazz.” He said that audience members with astute ears might recognize music from Duke Ellington’s “Symphony in Black.”

“It was only, as far as I can tell, recorded once,” Kaplowitz said. “I had to use my faculty privileges from Princeton to check it out and then duplicate it because it has never been re-released.”

While reading Into the Breeches!, Kaplowitz said he was struck by how Brant’s characters support the war by conserving cloth and gasoline, compared to modern Americans who rarely consider the Iraq War in their daily lives.

“(Brant) is quite a patriot, and I don’t mean patriotic in the blind, flag-waving way,” Kaplowitz said. “I think that that’s an extra tribute to him: He’s making you think about society without even asking a question.”