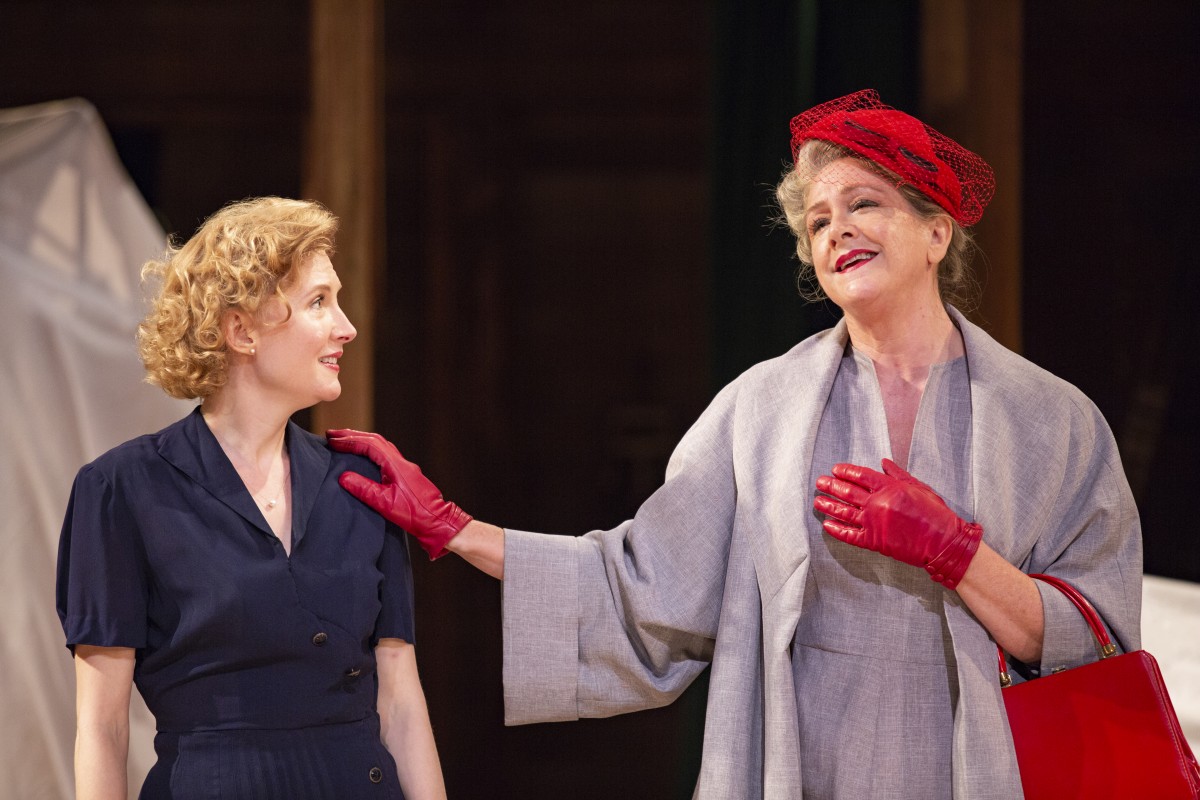 Guest Artists Nisi Sturgis, left, as Maggie Dalton and Carol Halstead as Celeste Fielding perform during an early dress rehearsal of "Into the Breeches" on Thursday, Aug. 9, 2018 in Bratton Theater. HALDAN KIRSCH/STAFF PHOTOGRAPHER

Guest artist Nisi Sturgis was 11 years old when she performed her first Shakespeare play, a summer production of A Midsummer Night’s Dream. Sturgis’ father had died the previous fall and her mother, a single parent, had accidentally dropped Sturgis off too early, leaving the young actor to explore the empty theater.

“It was home,” Sturgis said. “I played Puck, and I just felt like with this language, and with the size and scope of the world that he’s dealing with, I was able to find more of my expression and what I needed to do to push through my pain into having insight into other lives.”

In her latest role, Sturgis begins Into the Breeches! by walking into an empty theater lit by a lone ghostlight, just as she did when she was 11. Chautauqua Theater Company’s final mainstage production of the season opens this weekend with performances at 6 p.m. Saturday, Aug. 11, and 2:15 and 8 p.m. Sunday, Aug. 12, in Bratton Theater.

George Brant’s Into the Breeches! follows a troupe of women as they stage the Henriad while their husbands fight in World War II. To much of the community’s chagrin, the actors don pants to play Shakespeare’s famous “band of brothers,” ensuring that the theater does not go dark when local morale is low.

CTC is the second company to ever produce Into the Breeches!, following the play’s original commission for the ensemble of Trinity Repertory Company in Providence, Rhode Island.

“George really wrote this as a love letter to the women in this particular company, but also to all of the fantastic female actors out there who are so good, and there just aren’t enough parts for them,” said Laura Kepley, director of the CTC production. “In writing this, it was really about giving great actresses great roles.”

Sturgis plays the lead in Into the Breeches!, Maggie Dalton, a lover of theater who rallies the women of Buffalo, New York, to put on the play. Sturgis said the script reminds her of a line from Shakespeare’s All’s Well That Ends Well: “The web of our life is a mingled yarn, good and ill together.”

“(Brant) has woven that through every scene of this play,” Sturgis said. “It’s crazy to me how one moment can be ridiculously funny and then the next we are hanging on for dear life.”

“She can in one minute have you cracking up and in the next minute your heart has just been pulled out of your chest by what she’s done,” Kepley said. “She’s generous. She’s collaborative. She sets the pace, and she’s full of ideas that make the story more clear.”

Sturgis performed on Broadway in 39 Steps and had a recurring role on HBO’s “Boardwalk Empire” as June Thompson – one of the only female characters to survive all five seasons. She is currently an assistant professor of acting at University of Illinois Urbana-Champaign.

“She’s played the gamut of female characters,” Halstead said of the her character, Celeste Fielding. “She’s an actress that started out as an ingenue, and now she’s at a point in her career where she has to make peace with aging out of certain roles and allowing herself to take on more mature women in the canon, and it’s a difficult transition for her.”

Halstead’s Shakespeare credits include everything from Lady Macbeth and Gertrude to Queen Margaret and Titania. However, she noted that the Bard, although the most-produced playwright, wrote few leading roles for women.

“There will be two or three women and the rest men in a play that has 20 characters, so the opportunities are much less, and the plays tend to be male-storyline driven,” Halstead said. “However, that’s changing. There is a company called Shakespeare Santa Cruz and the artistic director Mike Ryan has made a commitment to have gender equity, which means … you have women playing men’s roles.”

Halstead described a production of Hamlet she was involved in where female actors “sunk their teeth” into several of the traditionally male characters, including Hamlet herself.

“You could hear the play in a whole new way,” Halstead said. “It was the same play, but hearing some of those soliloquies through a feminine voice was thrilling, and we had women, we had girls coming up to us at talkbacks going, ‘I never thought that would ever be a possibility, and now I know it is.’”

A CTC veteran, Halstead made her Chautauqua debut with All My Sons in 2005, the same year that CTC Artistic Director Andrew Borba and his predecessors, Ethan McSweeny and Vivienne Benesch, joined the company.

“We created a strong bond,” Halstead said. “The people that work here are just wonderful humans, and the intent on the work is to make it as good as possible. You want to go places where the quality of the work is high.”

Over the last 13 years, Halstead has since returned to the grounds for plays like Reckless and last season’s Noises Off! She said she keeps coming back for the engaged audiences and to mentor young artists in the conservatory.

“The theater has a wonderful, grand tradition of apprenticing with a company and learning the skills gradually through exchange with older company members,” Halstead said. “You gradually glean more and more experience, and it’s just a great give and take.”

Sturgis said she also learned from being in the room with the conservatory members in Into the Breeches!: Janet Fiki, Jennifer Holcombe and Jenny Latimer.

“It’s so inspiring to me to be part of a process where there are students and professionals,” Sturgis said. “I learn as much from them every day, just watching how they listen and how they grow and how they struggle and what they’re willing to do to get better at their craft.”

“Peggy Roeder, who plays Winifred Snow, is a genius comedian, and so I’m barely directing her,” Kepley said. “She’s just doing her thing and doing it different every time and (she’s) equally hilarious each time.”

Although Into the Breeches! is set in 1942, Halstead said the play’s story is relevant in modern, patriarchal society.

“This play gives women a change to delve into the women of the moment and how they were able to bloom into their own power, which wasn’t so possible when the men were around,” she said. “Celeste says at one point, ‘The men in this company have smothered me all these years’ — so there is that feeling of these women being able to feel the sun on their faces and begin to stretch their muscles and strengths and take their rightful place.”

The women in Into the Breeches! are able to flourish in their new roles, but Sturgis said these opportunities come at a cost. Throughout the play, the women cling to every letter from the warfront as they worry about their brothers and husbands who are overseas.

Although Sturgis does not currently have any relatives in the armed services, she said that her mother’s side of the family in Arkansas was devastated by the loss of a loved one during the Korean War.

She said that theater plays an important role in reminding society what is important. Regarding Into the Breeches!, Sturgis said that her character’s journey to find her voice through directing Henry V is fitting, as Shakespeare’s play is about leadership.

“People can say that’s a play about war, but it’s really not. It’s how you get to peace,” Sturgis said. “I hope the audience can feel that ultimately, (theater) is for hope, … it is for things we value that make the world a better and safer place.”