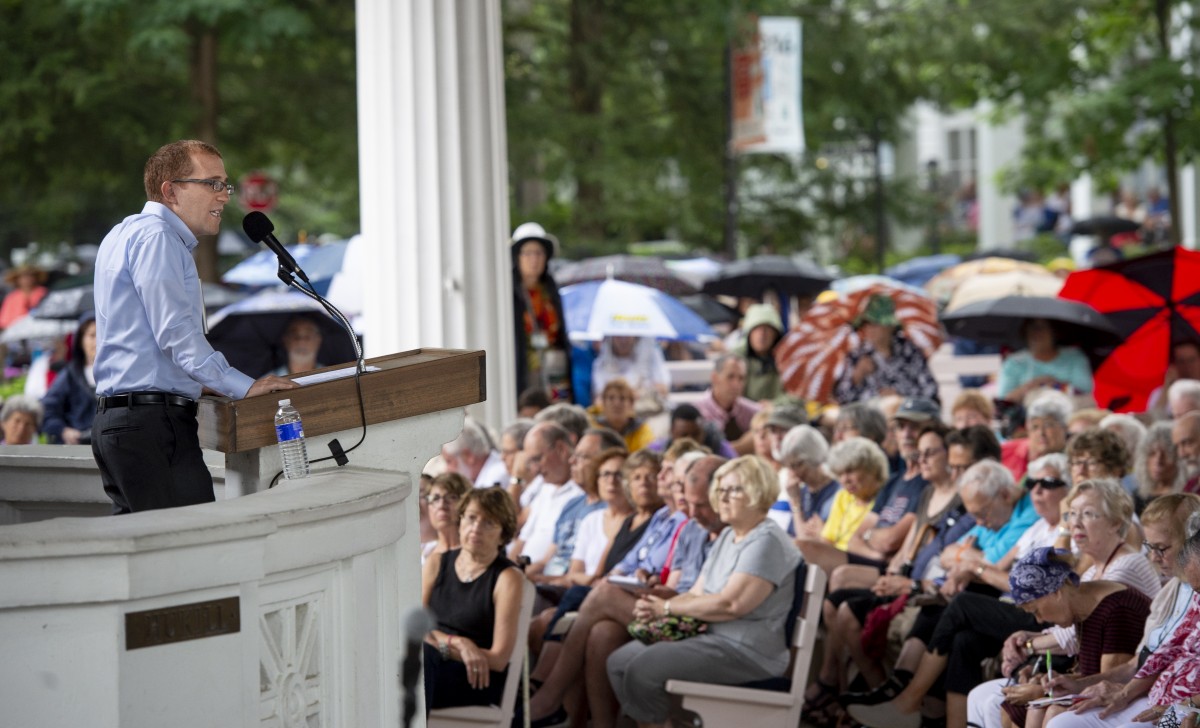 Daniel Mach, director of the ACLU Program on Freedom of Religion and Belief, delivers his lecture "Masterpiece Cakeshop and Beyond: Discrimination and religious Liberty in the Supreme Court" Wednesday, Aug. 8, 2018 in the Hall of Philosophy. DAVE MUNCH/PHOTO EDITOR

Although the baker won the battle in Masterpiece Cakeshop v. Colorado Civil Rights Commission, Daniel Mach believes he left empty-handed in the war. And he would know. As a member of the prosecuting side, Mach was on the front lines.

At 2 p.m. Wednesday, Aug. 8, in the Hall of Philosophy, Mach, director of the American Civil Liberties Union’s Program on Freedom of Religion and Belief and adjunct law professor at the George Washington University Law School, gave his lecture, “Masterpiece Cakeshop and Beyond: Discrimination and Religious Liberty in the Supreme Court,” as part of Week Seven’s interfaith theme, “Let Them Eat Cake? Defining the Future of Religious Freedom in the U.S.”

In July 2012, Craig and Mullins visited Masterpiece Cakeshop with Craig’s mother to order a cake for their upcoming wedding reception. However, the bakery owner, Jack Phillips, informed them that the bakery wouldn’t sell wedding cakes to same-sex couples, but would make and sell them any other baked goods.

Mach said the most important thing to note about the interaction was that Phillips gave the couple a “blanket rejection” on the spot.

“There was no discussion of what the cake would look like; there was no suggestion that there need be a specific message or any writing whatsoever,” he said. “The rejection came upfront at the mere notion that because of who you are, you are not getting a wedding cake.”

In response, the ACLU sued and asserted that Colorado’s civil rights laws had been violated.

When the case reached the U.S. Supreme Court, the bakery argued that the constitutional protections for free speech and the freedom of religion gave it the right to discriminate and violate the civil rights law with impunity, Mach said.

In terms of the bakery’s free speech argument, both the bakery and the Trump administration argued that the baker’s wedding cakes were “expressive products,” Mach said.

“Because of that, (Phillips claimed) that requiring him to make one for a same-sex couple would unconstitutionally compel him to convey a view with which he disagreed,” Mach said.

According to Mach, an exemption like what Phillips requested would have novel consequences.

“There is seemingly an endless list of businesses that could claim a similar exemption,” he said. “Book sellers, tailors, nail salons, lawyers, chefs, all offer expressive goods and services. Even the Subway sandwich chain calls their employees sandwich artists.”

Therefore, the bakery’s defense team had to come up with a way to limit which businesses qualified as expressive and which did not.

On the other hand, the ACLU’s defense did not depend on any “line drawing.”

“In our view, businesses producing expressive products are not immune from anti-discrimination laws. Businesses don’t have to affirm a message they believe in; they just have to treat customers equally.”

For decades, laws that burden religious exercise have been upheld by the courts as long as those laws are “neutral and generally applicable,” Mach said.

“Basically, as long as they were not written with the aim of suppressing religious exercise, and as long as they are applied neutrally by the state body and all across the board, they will be upheld,” he said.

Mach said the bakery did not “win big” with this argument either.

“In its decision, the court made clear that businesses do not have a blanket right to discriminate,” Mach said.

Instead, the court ruled that in the unique facts of the case, the process by which the Colorado Civil Rights Commission addressed that issue was tainted by anti-religious animus, and the bias independently violated the baker’s rights.

“It is an incredible stretch, says this neutral, unbiased observer,” Mach said.

First, in public hearings on the Masterpiece case, one of the seven civil rights commissioners said, “It is one of the most despicable pieces of rhetoric that people can use to use their religion to hurt others.”

Next, the Supreme Court mentioned another commissioner’s statement saying the baker can believe whatever he wants to believe, but he can’t act on that belief if he decides to do business in this state.

The final piece of evidence was the state civil rights commission’s refusal to pursue complaints against three other bakeries that refused to make a Christian activist’s cakes with anti-gay messages.

In 2014, William Jack went to a bakery in Denver and asked for two cakes, both in the shape of an open Bible. On one, he asked the bakery to write “God loves sinners” and “While we were yet sinners Christ died for us. Romans 5:8” and to include an illustration of two men holding hands in front of a cross, covered with what Jack described as a “Ghostbusters symbol,” a red circle with a line through it to show that such unions are “un-Biblical.” On the other cake, he wanted “Homosexuality is a detestable sin. Leviticus 18:22” written on one side of the Bible and “God hates sin. Psalm 45:7” on the other.

Mach believes using Jack as a piece of evidence “amounts to nothing” because those bakeries would have declined to make those cakes for any customer, regardless of their faith.

“There was simply no discrimination and no violation of the law,” he said. “Change William Jack’s faith, and he still wouldn’t have gotten his anti-gay cakes, but change the sexual orientation of Craig and Mullins and Masterpiece Cakeshop would have provided a cake.”

However, the Supreme Court claimed there was enough bias to make its decision in favor of Phillips. Mach said this conclusion was remarkable, especially in comparison to a contrary decision in a case a few weeks later.

“Although the Court bent over backwards to find anti-religion animus in the Masterpiece case, that same month the Supreme Court ignored far more compelling evidence and egregious religious hostility in upholding President Trump’s Muslim travel ban,” Mach said. “In the face of Trump’s repeated, unambiguous statements condemning Muslims and Islam, the court essentially gave the president a free pass to vilify an entire faith and then enshrined that bigotry into federal law and national immigration policy.”

After making a central campaign promise of a total and complete shutdown of Muslim immigration, Trump issued a series of travel bans using territory as a proxy for religion and imposing indefinite entry restrictions on the individual Muslim countries, Mach said.

In contrast to the Masterpiece case, the evidence of anti-religious animus in the Muslim ban case was “colossal.”

“It was unambiguous, and it all flowed from the president himself,” he said. “The buck stopped with Trump, and he made it absolutely clear what he thought. Neither the president’s lawyers nor any member of the majority of the Supreme Court ever tried to argue that the mountain of evidence was innocent and the president had not displayed hostility toward an entire group. They didn’t even try. They couldn’t.”

Instead, the court concluded that it was justified because the ban arose in the context of immigration combined with national security.

“In other words, as long as Trump claimed a non-religious reason for implementing that policy, as long as it was plausible, then the court will treat the president’s unequivocal, explicit anti-Muslim statements as irrelevant,” Mach said.

In the end, Mach believes it is evident that the Supreme Court went “out of its way” to recognize an opposite set of criteria than it did with Masterpiece, and the outcome poses a continuous threat to tolerance and religious belief in America.

So, where will it go from here? Mach said it is too early to tell.

“I would like to think that the administration would also care about the faiths of customers turned away by businesses simply because of who they are and who they love,” he said, “or that administration would care about civil rights laws that it is responsible for enforcing fairly and equally. But as I wrap up this afternoon, I am not getting my hopes up.”

Tags : Daniel MachLet Them Eat Cake? Defining the Future of Religious Freedom in the U.SMasterpiece Cakeshop and Beyond: Discrimination and Religious Liberty in the Supreme CourtWeek Seven
previous article