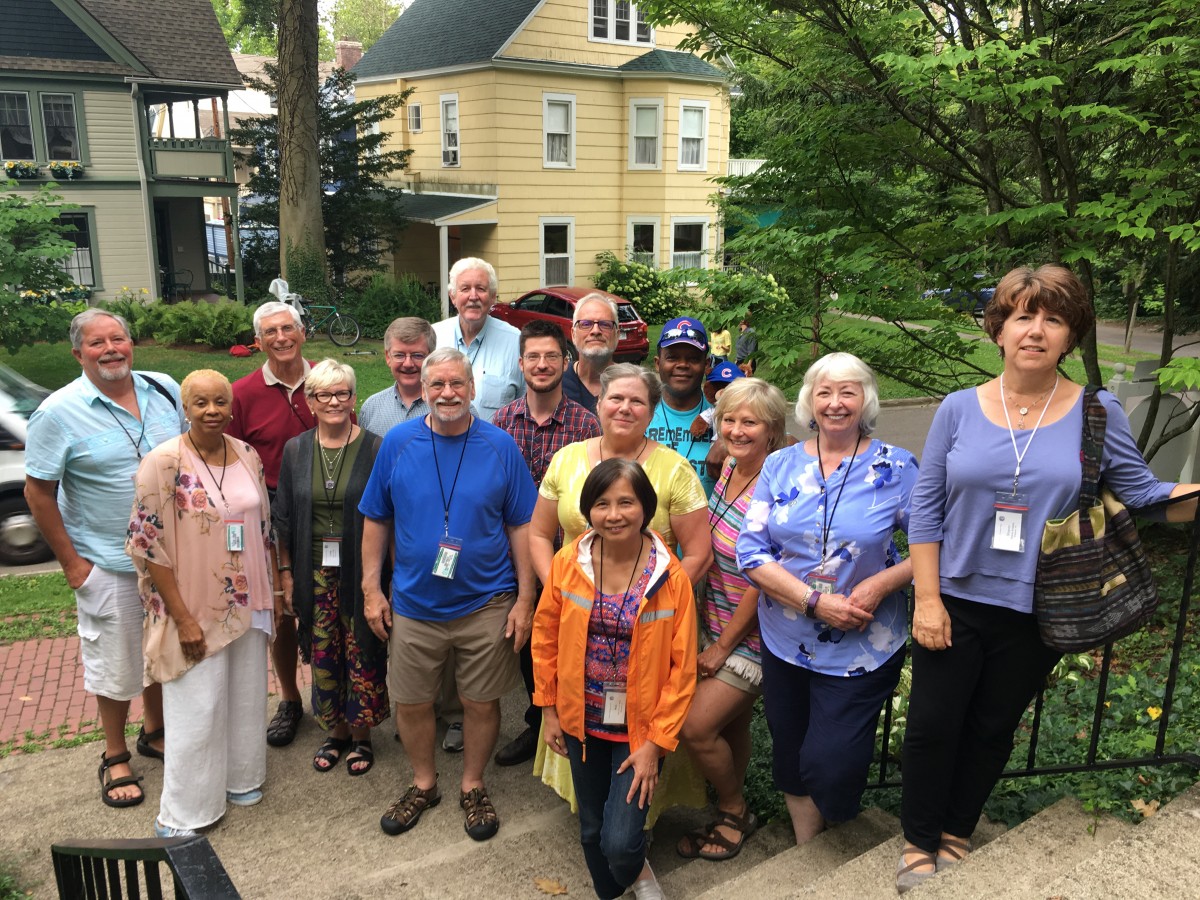 Clergy members from across North America spent a week of relaxation and reflection on the grounds during Week 6 for the Clergy Renewal Program sponsored by the International Order of the King’s Daughter’s and Sons. SUBMITTED PHOTO

When the pews are vacant and the gleaming reflections of stained glass windows fade, pastors are no different than the people they preach to. They need prayer, too.

On call 24 hours a day, these leaders of faith aid the dying, advise the living, address worldly issues on local levels and aim to be the voice of God while seeking out that voice themselves.

To provide a pause in their nonstop lifestyle, the International Order of the King’s Daughters and Sons sponsored clergy members from across North America to spend Week Six in Chautauqua as part of its Clergy Renewal Week.

To be selected for the program, an applicant must be an ordained clergy member who has never visited Chautauqua before. This year, 15 members were chosen from nine states and one Canadian province and represented six Christian denominations.

Beth Fanta, the director of the Clergy Renewal program and IOKDS spiritual life director, said she makes it a priority to choose members who serve local churches.

“These faithful men and women are the ones who guide us through the most joyful and also the most devastating times of our lives,” Fanta said. “However, in the ministerial profession they often have too few opportunities for their own relaxation and renewal.”

Fanta provides the participants with housing and numerous meals throughout the week, but the rest of their experience is solely up to them.

“We want to give the gift of freedom from responsibilities, agendas and expectations to enjoy all that Chautauqua Institution has to offer, whether is the enriching programs, recreation or simply the opportunity to relax and renew their spirits in this beautiful lake community,” Fanta said.

Sharon Amstutz is associate pastor at First Presbyterian Church of Kingsport in Kingsport, Tennessee, and was joined by her husband, Jim, to take part in this years program.

Amstutz started in ministry as a seminary intern in 1987 and said she never planned on becoming a pastor.

“I was doing ministry in the youth group and initially planned to be in hospital chaplaincy, and I was for awhile,” she said. “Never, ever, ever did I expect to be serving in a church. God’s sense of humor, that’s what got me there.”

However, the humor dwindled, and Amstutz began to encounter the most onerous aspects of ministry in the early stages of her career. As a youth minister, she guided her community through the loss of two 12-year-olds in one year. This past spring, she officiated seven funerals in seven weeks, many hitting too close to home.

“I came to this church as an intern 30 years ago, and so these people were my mentors and helped raise me and now I am burying them,” she said. “It is just so hard.”

Therefore, Amstutz believes the timing of the renewal program was “a miracle in itself.”

“I truly needed a break, and this was the best version of one,” she said. “I do not remember a time I have been taken care of quite like this. They were so wonderful to us; it is such a gift. They anticipated anything we might want, need or didn’t even know we needed.”

After adjusting to the lack of a daily routine, the Amstutzes found their balance between engagement and relaxation. Amstutz said the lectures of the week provided her with “concrete ideas” to take back home.

“Ministers do not often get a chance to listen to people teach and preach, and so this has been a good time for thoughtful conversation and ideas beyond my own region,” she said. “I think getting outside of Tennessee has been good, too, because the same ideas tend to circulate around and around, so bringing some outside ideas and perspective in has been very valuable.”

Initially, Jim Amstutz said the amount of options was a concern for him, as his wife tends to “over function.”

“The temptation, at least for her, is wanting to squeeze in every possible thing she can,” he said. “That is not necessarily what she needs, but it is an automatic reaction for so many. It is so wonderful, though, to have so many options. But whether we were attending events or resting, I am so grateful we got to share these memories together.”

Michael Ware, senior pastor at Webster Baptist Church in Webster, New York, was also astounded at the timing of the program. Ware is preparing to move to serve in Chicago and said the Week Six interfaith theme, “The Spirituality of Work,” was “much needed.”

Outside of the lectures, Ware said his favorite part was the conversations he took part in throughout the week.

“The people I talked to, they were just amazing, powerful people,” he said. “Not powerful in stature, but in their willingness to share their lives with me. The bond formed so quickly, it was like we were old friends and we didn’t even know it. I will never forget that. Never.”

Ware suspended contact with his home community for the duration of the week and believes it enhanced his overall experience.

“I was totally involved and took my time,” he said. “It was the freedom to just be, and that freedom is a rarity. Even when we go on vacation, we plan every moment of every day. I didn’t do that, and now renewal doesn’t even cover how I feel.”

Ware said he is now feeling less overwhelmed about his venture to Chicago and is promoting the renewal program to others every chance he gets.

“I would strongly advise anyone who has the opportunity to experience Chautauqua, whether it is the renewal program or any other week of the summer, to take that chance,” he said. “That week was a gift to me that I cherish, and I want everyone to feel the way I did.”

Another pastor who plans on spreading the word is Grady Roe, senior pastor at Walnut United Methodist Church in Round Mountain, Texas.

In November, Roe was approached about applying by an IOKDS representative in his congregation and decided to pursue it.

“She told me she wanted to sponsor me and gave me the information about how to apply,” Roe said. “It seemed too good to be true, and truthfully, it still does.”

Although they were few and far between, Roe said he enjoyed the activities shared by the entire group because each member provided a new perspective.

“We had so many different people in this particular group,” he said. “Whether it was different cultures and backgrounds or just varying personalities, every difference made our chats really enticing and valuable.”

Above all, Roe said the most important thing he left the program with was the reassurance that he is never alone.

“You just never know what this job entails on a day-to- day basis,” he said. “You might get a call and the next thing you know, you are standing beside someone’s bed as they pass. At any moment, you can become a part of someone’s best or worst day of their lives. The challenges and blessings of ministry are so similar among all of us, and this was a reminder that I am never, ever alone in this journey. I could not ask for more than that.”