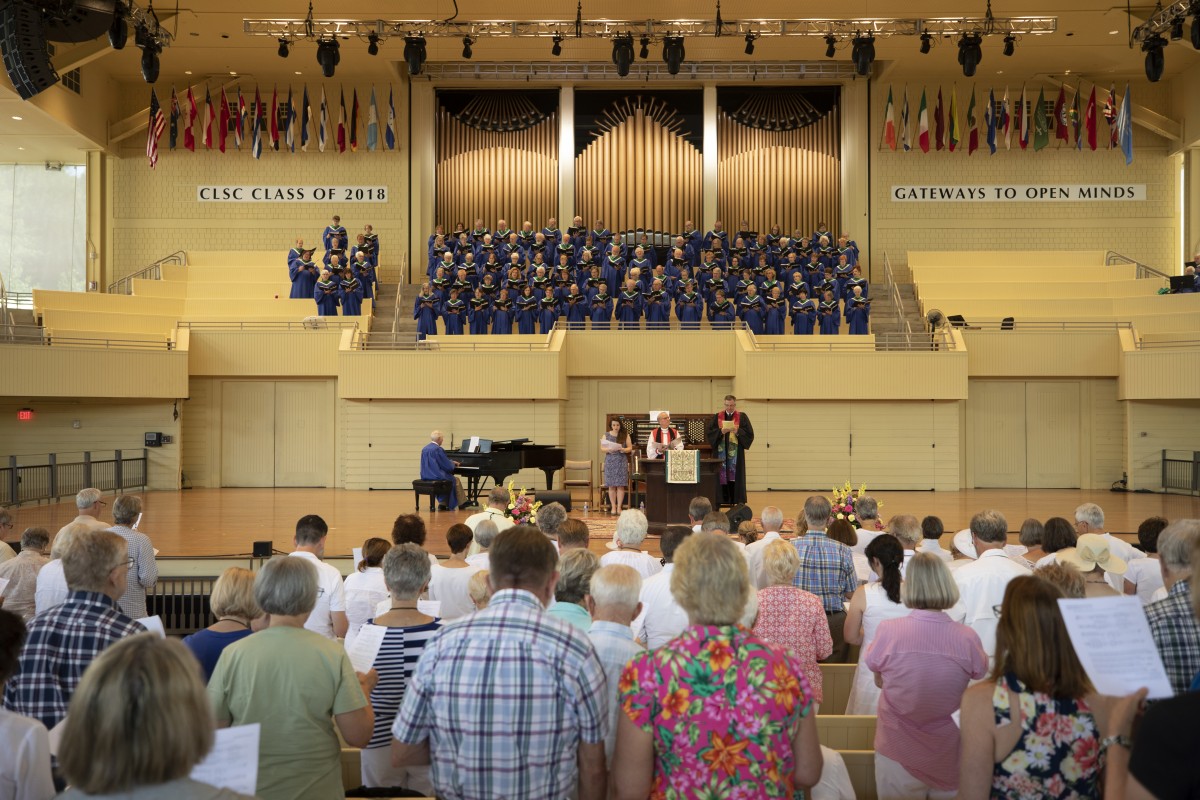 “We are going to continue to explore the beauty of holiness in a trademark of Mark’s gospel: the gospel sandwich,” said the Rev. David Shirey at the 9:15 a.m. Tuesday, August 7, morning worship service.

His sermon title was “A Gospel Sandwich,” and the Scripture text was Mark 5:21-43, the stories of Jairus’ daughter and the woman with a hemorrhage.

Shirey said that Mark uses a pattern to tell stories. Mark begins one story, then interrupts it with a second story. After completing the second story, Mark concludes the first story.

In the text, Jairus came to Jesus to ask his help for his daughter. As Jesus went with Jairus, a woman who had an issue of blood for 12 years touched him and was healed.

Jesus stopped to find out what had happened as he felt the power go out of him. After he had talked with the woman, he continued on to Jairus’ house and healed his daughter.

“This is a gospel sandwich, so let’s tuck our napkins in our collars and dig in,” Shirey said.

Wherever Jesus went, Shirey said, there were interruptions. He could rarely go from point A to point B without an interruption.

“Jesus took the time to engage the woman with the hemorrhage,” Shirey said. “How are you at being interrupted?”

Shirey told a story from theologian Henri Nouwen, who had a colleague who came in to his office to complain.

Following Jesus, Shirey said, “never goes as planned, so leave plenty of margins in your datebook to respond to interruptions.”

“Mark is the shortest of the gospels, and he is frugal with words,” Shirey said.

Yet, Shirey said, Mark provided a lot of details about the woman. She had been bleeding for 12 years, she had spent all her money on physicians. She was broke, and she was unclean, socially quarantined from the public and the temple.

“There is one detail Mark did not give — her name,” Shirey said. “She was poor and unadvocated for and unnamed, yet Jesus reached out to her.”

If you know Jesus, he told the congregation, you know he reached out to her.

“When other helpers fail and comforts flee, Help of the hopeless, O abide with me,” Shirey sang.

Jesus, who plucked grain on the Sabbath to feed the hungry and healed on the Sabbath, showed human compassion over “human strictures and some Scriptures.”

My daughter, Jesus called the woman, and gave her a name.

“He claimed her as his precious daughter and told her to go in peace, for her faith had made her well,” Shirey said.

The woman also reached out to Jesus. Despite some cultural norms that were buttressed, Shirey said, “by a few Scriptures, she had the courage born of faith to see who Jesus really was and who she really was.”

When the crowd told her to go away, she claimed her God-given place.

“She is the forebearer of all the marginalized women, who instead of staying silent, claimed their places as daughters of God,” Shirey said.

Rosa Parks, the suffragettes and the first women preachers and elders also had the courage born of faith to claim their places as daughters of God. Shirey quoted the Rev. Willie Francois: “They chose civil disobedience and divine obedience.”

The hemorrhaging woman had heard about Jesus through the first-century grapevine.

When some courageous son or daughter of God is welcomed and received, when compassion meets reaching out in faith, there is power to serve, he said.

Mark’s gospel then returns to the first story of Jairus’ daughter. There was another interruption as people arrived to tell Jairus his daughter was dead.

“When you read Aramaic in the Bible, you know you are getting close to the heart of Jesus,” Shirey said.

He gave several examples, including abba (father) rabboni (teacher) and Eloi, Eloi, lema sabachthani? (My God, My God, why have you forsaken me?)

Hear me, Shirey said, “whenever you see human lives that were formerly ignored, now dignified and healed, Jesus is nearby, speaking in his native tongue and raising them up.”

The little girl got up and walked, and Jesus told the people to give her something to eat.

“Give her a seat, give her the vote, give her a pulpit, a place at the communion table,” Shirey said. “Give her dignity and respect. Give her a gospel sandwich wrapped in resurrection. Give God’s daughters something to eat.”