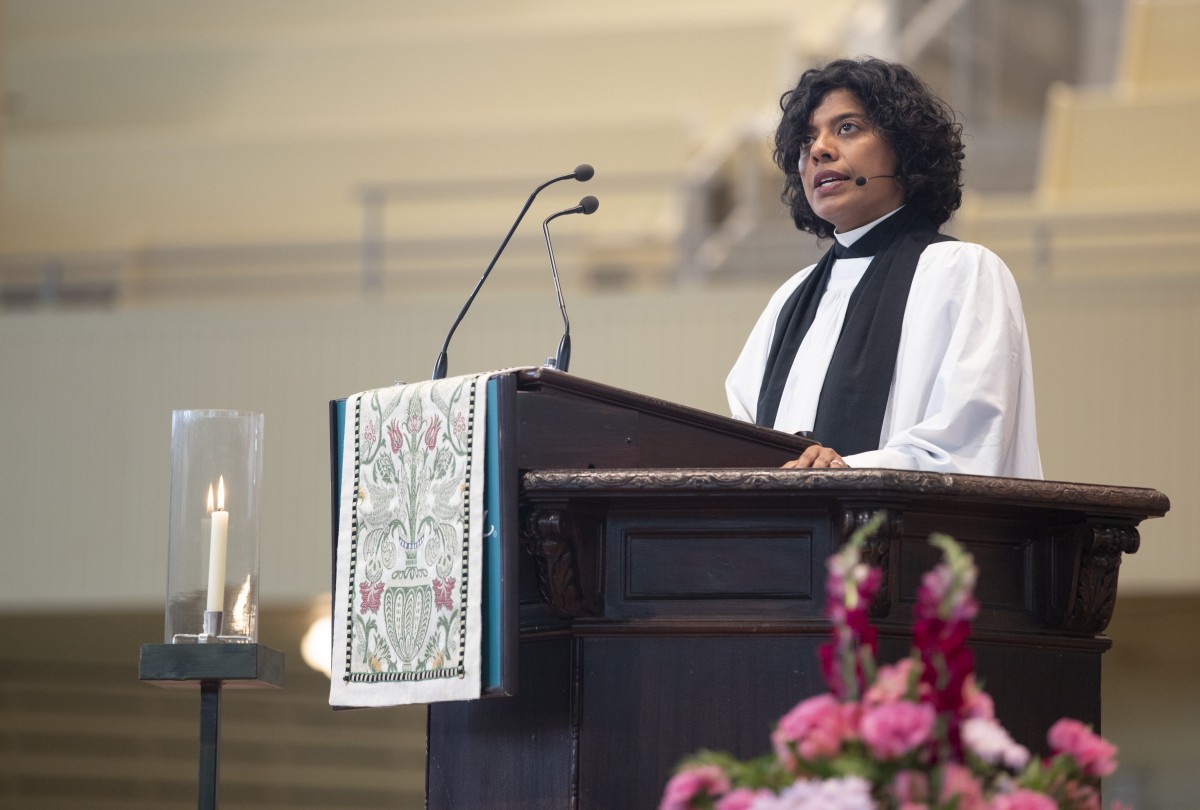 “I picked this text because it wraps up the book so well. As Emily Dickinson said, it helps us to ‘Tell all the truth but tell it slant,’ ” said the Rev. Winnie Varghese at the 9:15 a.m. Friday, Aug. 24, morning worship service.

“We usually read these verses as a set up for Peter running to the tomb, but we will pause here,” she said.

Joseph of Arimathea took Jesus’ body, wrapped it in linen and laid it in a tomb. Mary, in the beginning of the Gospel of Luke, wrapped Jesus in swaddling clothes and laid him in a manger.

The women who had been following Jesus waited and watched where Jesus body was laid, like Mary and Elizabeth waiting together for the birth of John the Baptist and Jesus.

“The threads of Luke 1 and 2, and the end of the Gospel are clear. This is a literature teacher’s dream,” Varghese said.

She quoted theologian Raimon Panikkar that Jesus as savior makes no sense in the Indian context because his life was too parochial, too particular to one time and place.

Varghese said that for her, Jesus the Christ makes sense because of the particularities of his life.

“I look to identify in Christ some of the life source, like John’s use of the Word, something for all time,” she said. “In Luke, it is more earthy as the ending mirrors the beginning.”

In Luke, Jesus seems to be born again, it seems to really happen.

“I know I am supposed to end the week on a high note and resurrection is a high note,” she said, “but if we go too high, given the world today, it will seem shallow.”

The women who followed Jesus were there for the signs of a new beginning.

Varghese was in Charlottesville in August 2017. She had been invited by the local Episcopal priest along with a group of other prominent people.

“I ignored the email but read it every day, as you do. It was August and I knew that the people on the list could not go, but they were people I admired,” she said.

She knew that she could go and finally answered the email. She told the priest if it would still be useful, she would come. He said “Yes, come.”

“I love protest as much as the rest of you. I was in Kerala the first time I saw a street protest. I knew that one group of people would stand in solidarity with others as one group after another walked past the government house,” she said.

She had never faced fascism or the hate of Ku Klux Klan head on.

“The people in my world are not white. They don’t say hateful things that you have to tiptoe around at meals,” she said. “We are not black Americans. We are Asian Americans, the permanent outsiders.”

She said that she tells people where her family is from before the people can tell her where she is from.

Varghese encountered recruiters for the Klan at LaGuardia Airport and she felt intimidated.

She put on her chaplain/mom face and looked the Klansmen — and they were all men — in the eye. They saw her but would not look her in the eye.

The Rev. Traci Blackmon, the executive minister of Justice & Local Church Ministries for The United Church of Christ, preached to a packed church that night. Varghese recalled that Blackmon called racism “the Goliath that needed its head cut off.”

One of the problems the protesters encountered was that it would be easy for the Klan and white supremacists to slip back into the community unnoticed.

The white supremacist marchers were outside the church and the people inside were told to stay in the church until the march had gone past. No one knew how long that would be.

“Traci and I wanted to go out on the front porch and let them know that if they intended to do our people harm, they would have to look us in the face, because we were there to protect our people,” Varghese said.

The people in the church had to leave by its side doors.

A Baptist deacon, whose church would hold the vigil the next night, insisted on giving Varghese a ride back to her hotel, even though she protested she could walk the short distance.

He told her, “We invited you here and we will make sure you are safe. We will be fine, we have a friend in the glove compartment,” referring to a pistol.

This man was afraid in his hometown. The older people had been terrorized by the Klan.

“I was angry and sad,” Varghese said.

There is new life, she said, and asked the congregation not to turn away in times of soul-gripping struggle.

She called the march in Charlottesville pathetic and foolish.

“The marchers tried to intimidate the people like the Romans did with death on a cross. The road to Jerusalem was lined with crosses to remind the Jews to stay in their place,” she said.

But the women dared to follow, to see where Jesus was buried and returned to make sure that he was buried properly.

“Because of them, we are all like Jesus — born again,” she said. Many rose to give her a standing ovation.

The Rev. Virginia Carr presided. The Rev. Mary Lee Talbot, Ph.D., morning worship columnist for the Daily, read the Scripture. The Motet Choir, under the direction of Jared Jacobsen, organist and coordinator of worship and sacred music, sang “Hear My Prayer,” by Moses Hogan. The Mr. and Mrs. William Uhler Follansbee Memorial Chaplaincy and the Daney-Holden Chaplaincy Fund provided support for this week’s services. 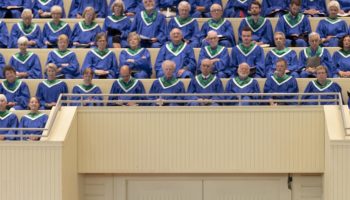 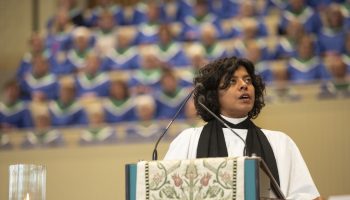