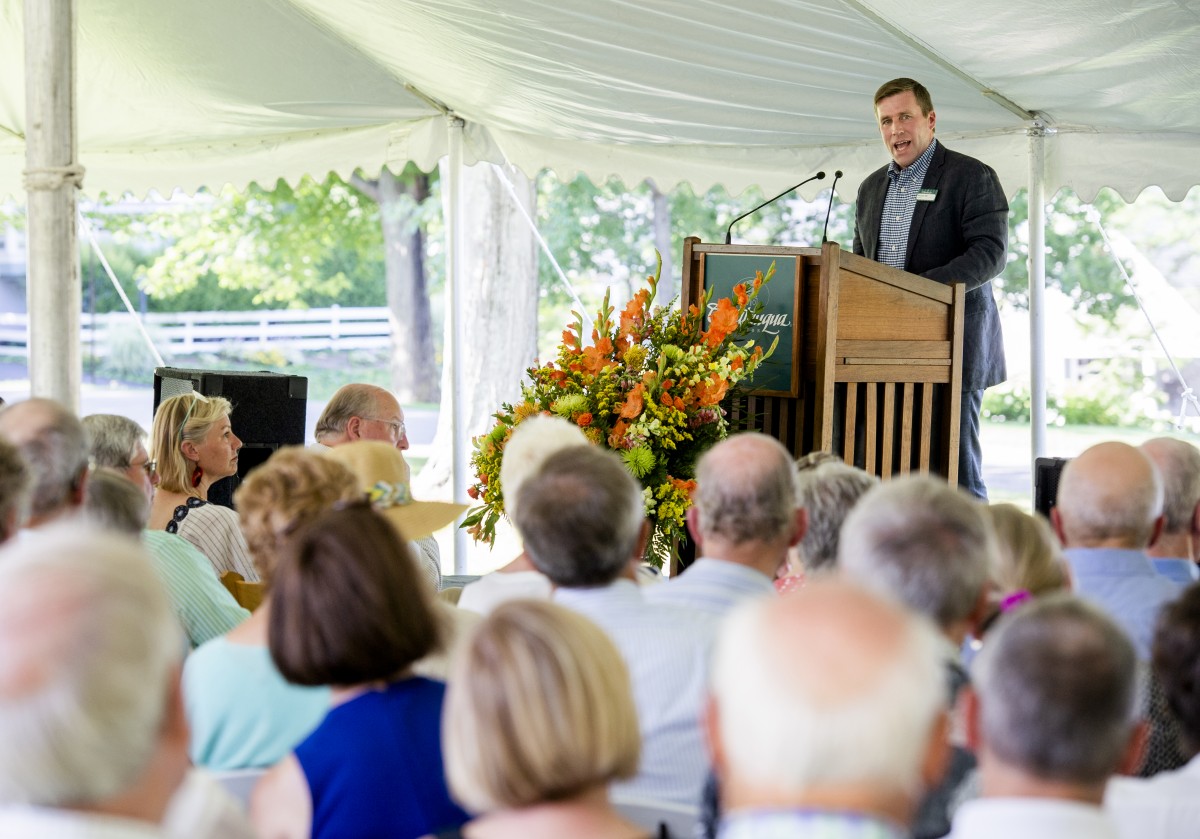 At 4 p.m. Sunday, Aug. 5, on the Arts Quad, members of the Bestor Society gathered for the annual President’s Address, hearing remarks from Jim Pardo Jr., chair of the board of trustees, Leslie Renjilian, co-chair of the Chautauqua Fund, Deborah Sunya Moore, vice president of performing and visual arts, and Michael E. Hill, Institution president.

Pardo began the program by thanking audience members for their philanthropy to the annual fund. Made up of Chautauquans who donate $3,500 or more to the Institution every year, members of the Bestor Society contribute approximately three-quarters of the funds raised to the Chautauqua Fund every year.

“You all have heard me on too many occasions explain the importance that philanthropy plays,” Pardo said. “We could not fund the mix of programming that distinguishes Chautauqua … without the kindness and generosity of the people who are sitting in front of me.”

Pardo then gave the podium to Moore, who spoke about diversity in the arts at the Institution, before introducing five students who have spent the summer in residency with the Chautauqua Symphony Orchestra as part of the Chautauqua Diversity Fellows Program. The artists performed several short selections before Hill delivered his address.

Hill began his remarks by extending his gratitude to all those sitting under the tent for sharing the “picturesque” view of the lake with him and the “exquisite sounds of a chamber ensemble that exemplifies the promise of Chautauqua and of the future of artists and artistry.”

He said the view has been a source of inspiration for him, his predecessors and those who call the Institution their home and priority.

“More than a few of my predecessors have likely sought inspiration here as they wrestled with the challenges of the day or framed their ideas and vision for the future, as well as solutions to problems that must have seemed intractable,” Hill said. “Our history roots us, just as the trees all around this magnificent perch, anchor and frame the scene below.”

Throughout his address, Hill celebrated past and present Chautauquans “who have uniquely embraced our struggles; rejoiced in our celebrations … and who have made impossible dreams not-so impossible.”

He also took the time to describe a promising future that he sees for the Institution.

“As we sit on this hill—in the company of Chautauquans of the past — can we imagine the Chautauqua we wish to sustain and create for those who will stand here when we no longer can?” Hill said.

Throughout the season, Hill has been contemplating what the Institution may look like in 2024, its 150th birthday. He said that based on the conversations Chautauquans have had this season, the community has “dared to dream.”

Among other initiatives, he said Chautauquans have dared to dream for the recovery of a lake labeled “impaired” by the New York State Department of Environmental Conservation, for youth programs to “again set the pace for innovation and engagement” and for using technology to help the Institution expand its reach outside of the nine-week season.

“All of this may sound extremely lofty, but the world I describe and Chautauqua’s role in it mirrors so much of our history,” Hill said. “Chautauqua has never shied away from what’s hard to do, but has rather tried to asked,‘What is it that is ours to do?’ ”

Hill concluded his address with a point from author Parker Palmer, who Hill described as his favorite educator.

Hill said that he assumed “the posture of humility” as he addressed the members of the Bestor Society, and once again thanked them for wanting to makethe Institution better.

“Thank you for standing on this hill with me and asking the critical question, ‘What is ours to do in the world?’ ” Hill said. “With your help,I believe the answer will be thrilling.”