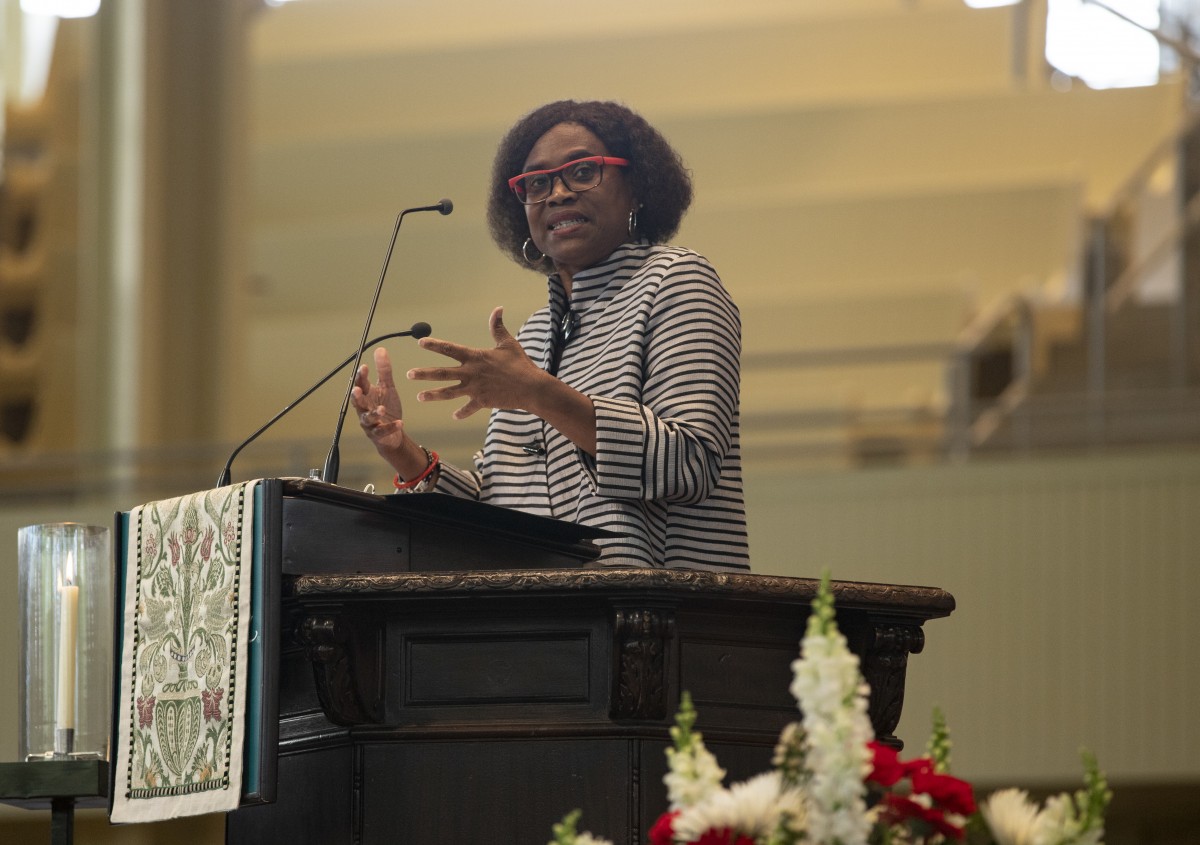 “Did I have a walk this morning? No, but it was raining,” said the Rev. Irene Monroe at the 9:15 a.m. Tuesday morning worship service in the Amphitheater.

“I have a tsunami of thanks for the hundreds of you who wanted to walk with me,” she said.

Monroe had expressed in her Monday sermon the fear that if she walked the grounds by herself early in the morning, someone would call the cops on her.

She has been trying to figure out Chautauqua and looked for a metaphor to tell Chautauquans “who you are.”

“This is the white Wakanda,” she said. “Wakanda is fictional, but you are every day. I get you now.”

Monroe’s original title for her sermon was “When Our Better Angels Don’t Speak Up.” She thought about changing it to “How Do I Get White People to Talk About Race?”

“But then I would have to walk around on eggshells all week,” she said. “If you did not like it, I could get a plane back to Cambridge.”

She said she finally decided to call her sermon “Why You People Need to Talk About Race.”

On the Chautauqua website, she found an address from President Michael E. Hill that asked the question: How do you embrace diversity when you have so little or none?

Hill asked the Chautauqua leadership how we could claim to convene critical conversations when critical segments of the population are not here.

“My sweetheart called last night,” Monroe said, “and asked how I was doing. I told her, ‘Not well.’ I felt like a fly in a bowl of milk or I was at Cheers — everyone knows my name, but they don’t want me here.”

Monroe said a white person told her that she found Chautauqua very white.

“The comment reminded me of the movie ‘The Sixth Sense’ with the little boy who sees dead people,” she said. “She reassured me, ‘I see white people here.’ ”

Monroe said that people tell her they want diversity, but “let me tell you what people say and don’t say.”

“White people like diversity only as it relates to restaurants,” she said. “These liberal progressives in places like New York, Chicago and Los Angeles can talk for hours about getting sushi, tacos and soul food.”

Then, she said, they send their kids to private schools and live in neighborhoods without any of the people who make those foods.

“I am talking about you, and I know you don’t like to be called out,” she said. “You want diversity, but you don’t want it too ethnic.”

Monroe said the diversity training Starbucks did this year was a good step for a major company, but “talking about race is not sensitivity training.”

“You are not going to get it right the first time,” she said. “Like parenting, you learn as you go along. Your bigotry and biases as an employee drains productivity and profitability.”

A person asked Monroe to return to the two questions she asked in Sunday’s sermon — how are you white, and how white are you?

“Some people asked, ‘What are you saying?’ These are simple sentences,” Monroe said.

Ask a black person “how black are you,” she said, and they might reply, “Light, bright and damn near white. Or as dark as Wesley Snipes and as light as Valerie Jarrett.”

“Go to those places in yourself and do some work,” she said.

She recommended a book by Robin DiAngelo, White Fragility: Why It’s So Hard for White People to Talk About Racism.

White people, Monroe said, are insulated from race-based stress. This insulation builds an expectation of white comfort that cannot tolerate racial stress. The people of Chautauqua responded to her lament of not feeling comfortable about walking alone in a variety of ways. She used the Parable of the Sower from Matthew 13:3-9 for the structure of her response.

First, there were the people who were “hard ground.” They dismissed her discomfort, gave her the “stink eye,” and someone told her she was “totally wrong about this place.”

But there were so many people, Monroe said, who saw her as the bent woman from Sunday’s sermon, who touched her heart and came to talk with her.

One person told her to read the Institution website.

“It says that Chautauqua is Disneyland for NPR listeners,” Monroe said. “I have a blog on NPR, so I belong.”

She said some describe Chautauqua as a “vacation spot for intellectual discussion.” Monroe said she fit that, too.

The second metaphor Monroe took from the Scripture was thorny ground.

“These are people who hear what I say but are a bit irritated,” she said. “They ask, ‘Why can’t you come to a nice place and just see the beauty?’ ”

On Sunday night at the LGBT gathering at the Athenaeum Hotel, a black lesbian told the group that she had been wearing a big afro, but her hair was different now, and people told her she looked better.

“Hair is hair,” Monroe said. “I have a modified afro, and some days are better than others. But just so you know, I am happy to be nappy.”

She skipped the third metaphor and moved to the fourth: the seed that was planted on solid ground.

In response to Monroe’s discomfort about walking alone, she said “many (Chautauquans) said, ‘I will walk with you.’ ”

“I know you ain’t walkers, but I loved what you did,” she said.

Monroe said that two women from Alabama spoke to her about her fear to visit the National Memorial for Peace and Justice, the lynching memorial.

Alabama is one of the worst places for black people to go, Monroe said. This is where four little girls were killed in a church bombing, Rosa Parks was arrested for not giving her seat to a white man and where the last cargo of enslaved Africans landed.

“These ladies know the terrible history there, and they are not running from it,” Monroe said.

She said the women told her, “On my watch, you can come and go to the museum.”

“I got your back. That is all black people want to know — you got our back,” she said.