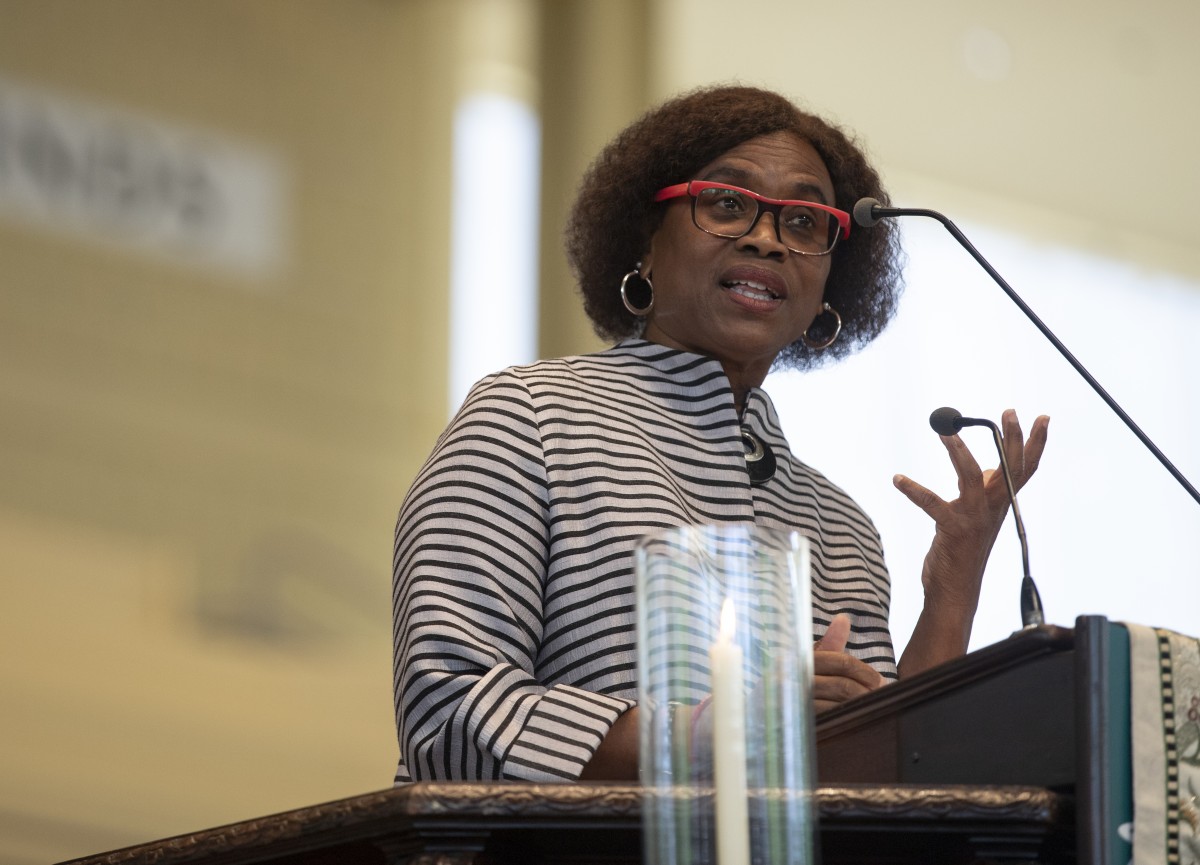 “We got over hump day (Wednesday), and I have to tell you, it was just as hard for me to deliver that sermon yesterday as it was for you to hear it,” said the Rev. Irene Monroe at the 9:15 a.m. Thurs., Aug. 16, morning worship service in the Amphitheater.

Her sermon title was “How God Writes Straight with Crooked Lines,” and the Scripture text was Matthew 7:7-9, seek and you will find. Her topic was moral leadership.

Monroe said that she did not come to Chautauqua with pre-packaged sermons. She gets up at 4 a.m. to write.

“These sermons are a little rough because I want to speak to the community,” she said. “It is not fair to ask you to wrestle with the text and sermon if I don’t wrestle with it to tell you what I need to tell you.”

One way reciprocity happened was that a group of six people invited her to sit on the porch at the Athenaeum Hotel and wanted to know how they could be helpful. The group shared their stories with one another.

Monroe said she was moved because the man is a judge.

“That must be hard to be in life — sending people up, abiding by the law,” she said. “He wrestled as he told us his story.”

The judge had in front of him an African-American boy, who was a nuisance and a danger to himself and society. The judge knew his family, and he knew the hard knocks the kid had faced in life. He gave the kid every chance possible within the law to get his act right, but he screwed up, and the judge had to send him to jail.

“I know that if I ever mess up and need to go before a judge, I am going to look for him,” Monroe said.

Her choice of the text was intentional because it allowed her to speak to moral leadership.

“How do you begin if you don’t ask and you don’t seek?” she said.

“We need moral leaders who ask,” she said.

Moral leaders seek opportunities to go to the margins, to get out of their comfort zone and do the work of justice.

Moral leadership is about service to others, she said. Moral leaders work for social change and justice and to address oppression.

“Moral leaders seek to build a movement, not a moment, of justice,” she said.

Monroe cited the Wednesday afternoon interfaith lecture by Clara Ester, whose life bears witness to moral leadership. After seeing Martin Luther King Jr. assassinated while she was a college student working in Memphis, Ester found a way to move forward without bitterness and with honesty about her moments of anger, despite the residual trauma.

“April 4 marked the 50th anniversary of King’s assassination, and it was a reminder of the unaddressed issue of gun violence and that in 2018, it is an issue for our kids,” Monroe said.

“We have nothing if we cannot make our children safe,” she said. “They shamed the adults and the government, and I wondered, ‘Will there be change?’ ”

When King’s granddaughter Yolanda Renee King spoke at the March for Our Lives Rally, she recalled his “I Have A Dream” speech. She said, “I have a dream — enough is enough.”

King did not care where the intersections were made, but there needed to be an interactive humanity for justice
to happen. King wrote “Letter From a Birmingham Jail,” as a response to a letter from eight white clergy in Birmingham, Alabama. King told them he had a moral responsibility to break unjust laws and to bring it to public attention.

“They were the stumbling block for the Negro,” Monroe said, “not the klan or White Citizens’ Council.”

The black church is built out of social justice, she said, and it is right on some issues and not right on others.

“If I said in the black church that it is homophobic and anti-transgender, I would be get the stink eye,” she said. “White people do not have a patent on prejudice or stink eye. We do not see the humanity of our own children.”

If you think moral justice is beyond your reach, she told the congregation, it is not.

“God does write straight with crooked lines,” she said. “When I said, ‘I know you got my back,’ that is about moral leadership. I know that if for some reason I got arrested here for walking while black, you would want to know why.”

Monroe said white people are not used to being afraid and think they are not racist.

She quoted professor Angela Davis that “it is not enough to be non-racist, we have to be anti-racist.” And don’t say you don’t see color when you are looking right at me, Davis said.

“You have to identify and eradicate racism,” Monroe said. “You know, a white person complaining about white privilege is like a lottery winner complaining about the responsibilities of money to a poor person.”

She cited the example of the white woman who took a video of the two men in a Philadelphia Starbucks as a positive example of using white privilege. She added that the white guy who asked why the police got called when the men were waiting for him used his white privilege to speak up for them.

“To be an ally, you must believe our stories,” Monroe said. “Don’t give me the stink eye and blame me because you are mad about what I said.”

When someone is drowning, you don’t ask if they are OK or if there is anything you can do, she told the congregation — you throw a lifeline.

“We can’t dismantle racism, but moral leadership will find places where it can be addressed,” she said.

Moral leadership looks for those brief instances in the lives of others where they can make a difference.

“You see moral leadership more often in those brief encounters,” she said. “When we see and use the gifts we have in the service of others, we are the moral leaders we have been looking for.”

The Rev. Natalie Hansen presided. Pat Brown, a retired librarian and former co-host at the Baptist House, read the Scripture. George Wolfe, saxophone, and Joseph Musser, piano played Etude No. 10 by Charles Koechlin and “Ave Maria” by Astor Piazzolla for the prelude. The Motet Choir sang “Fly From Your Cage,” text by Rumi and music by Connor J. Koppin, under the direction of Jared Jacobsen, organist and coordinator of worship and sacred music. The Samuel M. and Mary E. Hazlett Memorial Fund and the John William Tyrrell Endowment for Religion provide support for this week’s services.

Playwright George Brant’s ‘Into the Breeches!’ makes for gender-bent Shakespeare