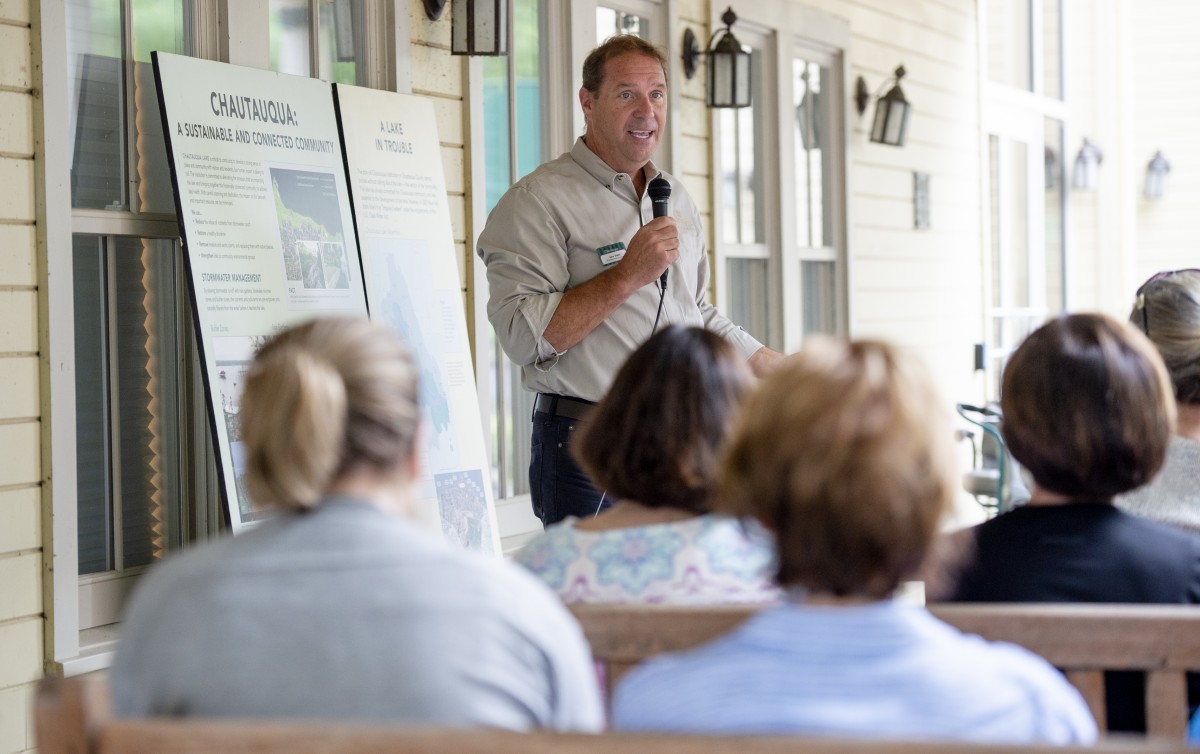 Armed with two informational boards and over 10 years of data research, Vice President of Campus Planning and Operations John Shedd described the current and future state of Chautauqua Lake during the 9:30 a.m. Wednesday, Aug. 1, Leadership Porch Discussion at the Hultquist Center.

“My goal is to maintain the beautiful property that we have,” Shedd said. “We are very conscious about what happens to our lake, which is about 13,000 acres.”

Shedd described the two basins into which the lake feeds: the north basin, where the Institution is located, and the south basin, which is located in the Celoron area. Due to the lake’s size, Shedd said, water from the north basin takes around 2.9 years to reach the south basin. According to Shedd, this means that any major changes will take years to actually alter the water quality across the entire lake.

“Life around here depends on Chautauqua Lake, and we are very aware of that,” he said. “Fortunately for us, we have many people who are heavily involved in the preservation of the lake.”

Despite the community’s involvement, there are still some significant problems that Shedd and his department have been working to remedy. Specifically, there is an increased amount of invasive weeds and algae in the water that cause problems within the ecological system and can make the lake less enjoyable for boating and swimming.

“Data collection is really important right now because we are trying to figure out what might be causing these invasive weeds and algae,” Shedd said, and scientists have told the Institution that that’s likely caused by an increased amount of phosphorus and nitrogen in the surrounding soil.

Organizations like the Chautauqua Lake Association, the Audubon Nature Center and SUNY Fredonia are still collecting water samples to help inform and create projects to address these issues.

According to Shedd, the Institution has taken steps that include planting native plants along the waterline to absorb some of the phosphorus and nitrogen and creating a system for homeowners that would require any architectural or landscape changes to properties to be reviewed for potential harm to the lake.

Current projects include plans that allow the water flow into the lake to be slowed so that some of those natural elements can be absorbed into the soil instead of into the lake, Shedd said.

“We have been very active with rain garden installation, including the ones by Children’s Beach, Peck Avenue and the storm garden near (Elizabeth S.) Lenna Hall,” Shedd said. “They are all planted with indigenous plants that can safely and effectively absorb that rainwater.”

It is not only the Institution that is looking into remedies for the weeds and algae in the lake. The Chautauqua Lake and Watershed Management Alliance, the Chautauqua Utility District and surrounding community municipalities, including Lakewood and Busti, have begun developing plans to reduce the amount of invasive species of plants within the lake.

Shedd said that one specific data-collection project piques his interest because of its success in Lake George, located in northeastern New York. International Business Machines Corporation recently created a machine that has been placed in Lake George that collects data from the water and air quality in the lake to further inform what might be causing some of its problems.

“We want to see if we could potentially create a partnership with them,” Shedd said.

Although the Institution and surrounding communities are working with homeowners and farms to reduce runoff, there is another potential issue that could be causing the increased amounts of phosphorus and nitrogen in the lake: a bed of silt at the bottom of the lake that has been building up for years and contains high levels of those chemicals.

This “internal load” could have been caused by years of nutrients owing into the lake, Shedd said.

“It took over 100 years to create this problem, so it might take 30 or more years to solve it,” Shedd said.

Shedd was appointed by New York Gov. Andrew M. Cuomo to be a member of the Chautauqua Lake Steering Committee, which will continue to work to create remedies to the current problems. Additionally, the Institution has hired Ramboll, a lake management company out of Atlanta, as a technical consultant on lake matters.

Until the completion of data collection, Shedd encourages homeowners to help preserve the lake by refraining from using fertilizers that contain nitrogen or phosphorus and by using systems that might help reduce lake runoff when making architectural or landscape changes to their homes.

Shedd’s discussion was followed by a Q-and-A segment in which community members asked about the amount of herbicides in the drinking water, making paved roads more permeable to prevent runoff and if homeowners can ask for advice from the Department of Community Services/Operations about fertilizers and renovations.

For the next Leadership Porch Discussion, Emily Morris, vice president of marketing and communications and chief brand officer, will be discussing “Building Chautauqua’s Brand”at 9:30 a.m. Wednesday at the Hultquist Center.