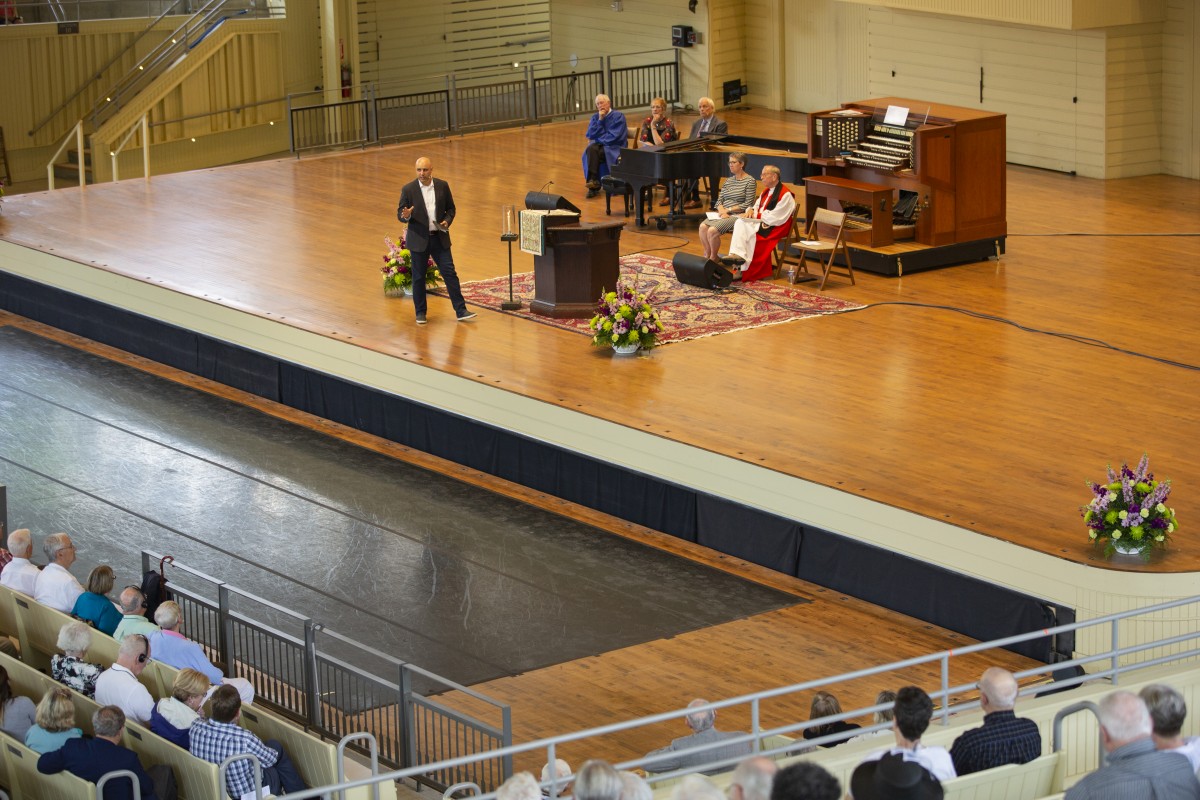 When the Rev. Skye Jethani was a 25-year-old seminary student, he thought he was being trained well to think critically, but he was not being trained to be pastoral. To remedy this, he enrolled in a pastoral care class that was conducted in a local hospital

“This was immediately challenging because I was 25 years old, and most of the people I was visiting were two, three or four times older,” Jethani said. “Also, I am a natural introvert, and I was terrified to enter a room and talk to someone.”

Jethani was preaching at the 9:15 a.m. Thursday morning worship service on Aug. 2 in the Amphitheater. His sermon title was “The Right Way to Play God,” and the Scripture text was Ephesians 4:25-5:2, Paul’s instructions for how to live in love.

His supervisor took Jethani aside and gave him two pieces of advice. First, he should have prayers ready and Scriptures marked to read.

“Some people have tabs in their Bible with the names of the books, but mine had tabs with diseases,” he said.

Another mentor told Jethani that it is OK to have butterflies as long as they are flying in formation.

“That means to be prepared,” he said.

The second piece of advice from his supervisor was for Jethani to say to himself before entering a room, “In this room, I represent the presence of God.”

“That was not helping me,” Jethani said. “I already felt inadequate, and now I was supposed to represent God.”

Jethani said his supervisor told him that he was telling him this to stress the importance and dignity of his work.

The person in that hospital room may be afraid, lonely or wondering about God’s presence and goodness, he said.

“I had to get over myself and give dignity to what I was doing,” Jethani said.

Representing the presence of God is not a calling limited to clergy; it is a calling open to all.

“We are made in the image of God, which was a radical idea 4,000 years ago,” Jethani said.

Then, the gods needed slaves to build them temples, feed them food and fight their petty wars as foot soldiers. Human beings were just the help, and only a king or pharaoh would have the image of a god in human form.

The Israelites turned this idea upside down.

“As Isaiah 66 says, the cosmos is God’s temple and the earth his footstool,” Jethani said. “God created us to represent him to all the world. In every room we enter, we represent God.”

Paul, in his letter to the Ephesians, urged them to be imitators of God, “to play God in the best possible sense — to seek the well-being of others, the flourishing of people in our care,” Jethani said.

The next part of Ephesians 5 has brought consternation to many people. Several members of the congregation hissed as Jethani introduced the subject of the household code.

The household code said that wives were to be subservient to husbands, slaves to masters and children to fathers.

“Many people take these passages to be prescriptive, that this is what a household should be like,” Jethani said. “I think they are descriptive of how a Roman household operated. Men did dominate.”

Jethani said Paul was saying that “if you find yourself in a relationship where you have authority, be the presence of God to those in your care.”

People would look to serve, care and cultivate what is beneficial to others. Jethani then gave three examples of friends who did this.

David invited Jethani to PNC Park in Pittsburgh. David was one of the chief architects of the park, and he said he designed it so that those who attended a game would see the beautiful skyline and bridges of the redeveloped city.

In left field, there is a spiral ramp that is exposed to the field rather than being hidden. David wanted even the people who had standing room tickets to have a good view of the game.

“Why should only the wealthy get a good view?” said David.

Pete went on a mission trip to Brazil and came back “knowing what real coffee is.” He invented a computer program to roast coffee, got a patent and set up a business just at the beginning of the recession in 2008.

As Pete was looking for employees, he knew that people just out of prison have a hard time getting a job.

“He decided to only hire ex-offenders, and called his business ‘Second Chance Coffee,’” Jethani said. “He used his authority to bring blessings to people in need.”

Jethani was visiting Daniel at his warehouse one day, and Daniel noticed that one of his new employees, just out of Harvard, was having a rough day. The young man finally told Daniel that his mother was having mental health issues and he had put her in the hospital the day before.

Daniel took the young man and Jethani to the hospital and told Jethani, “You are going to pray.”

“There are some rooms we go into by choice and others we would choose not to go in, but we have to by circumstances beyond our control,” Jethani said.

In those rooms that we do not enter by choice, we can choose to represent God there.

“There were some patients who had such peace and serenity from the Spirit that I walked away feeling like they ministered to me,” Jethani said.

A student called one day and desperately needed to talk with Jethani.

“He said, ‘I need you to tell me the truth, and I won’t tell anyone the answer,’” Jethani said. “Now that’s intriguing.”

The student asked Jethani if he ever regretted marrying his wife. The student was seriously dating a woman and was getting cold feet about their relationship.

“I did not make that decision,” Jethani said. “Skye, 18 years ago, made that decision. I live with the consequences. By God’s grace, I choose to do what I did not choose — to love my wife.”

Jethani looked at a tattoo the student had and said, “Your younger, stupider — probably drunken self — got that tattoo, but you live with the consequences.”

He told the congregation that there are situations we never expect to be in.

“By God’s grace, we imitate him,” Jethani said. “We learn how to be the presence of God in the room. In this place that you have chosen to be, as you enter each room, say to yourself, ‘In this room, I am God’s presence.’ ”

The Rev. Carmen Perry presided. Sally Holder, who is active at the Episcopal House in Chautauqua, read the Scriptures. The prelude music was “Reflective Rhapsody” and “Traveling Toccata” from “Three American Portraits” by Randall Faust. It was performed by Barbara Hois, flute, Debbie Grohman, clarinet, and Willie La Favor, piano. The Motet Choir sang “The Lord’s Prayer” by David N. Childs. Hois, flute, accompanied the choir and Jared Jacobsen, organist and coordinator of worship and sacred music, directed the choir and accompanied them on the piano. The Randell-Hall Memorial Chaplaincy and the Geraldine M. and Frank E. McElree Jr. Chaplaincy Fund support this week’s services. 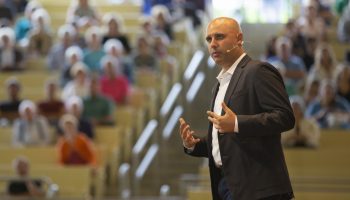