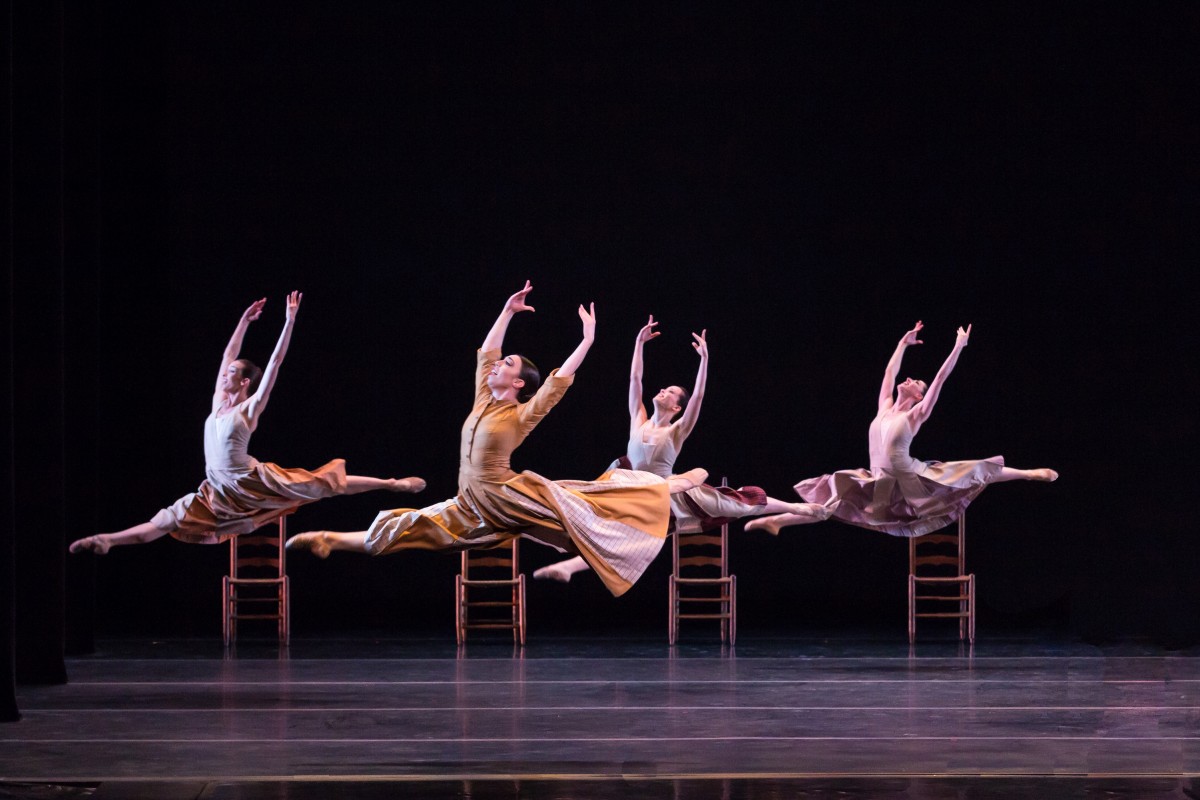 Nashville Ballet company members dance during “Appalachian Spring,” a work they will perform as part of their program at 8:15 p.m. Saturday, Aug. 11, in the Amphitheater.

This weekend, Nashville Ballet will begin its one-week mini-residency on the grounds with a performance that travels around the world.

At 8:15 p.m. Saturday, Aug. 11, in the Amphitheater, each of the pieces will represent a different geographical area, from the western United States with “Western Symphony,” set to music by Hershy Kay and choreography by George Balanchine; the eastern United States with “Appalachian Spring,” set to music by Aaron Copland and choreographed by Nashville Ballet Artistic Director Paul Vasterling; and central Europe with “Sechs Tänze,” with music by Mozart and choreography by Jiří Kylián.

“There is a real variety in the music and choreography within this program,” Vasterling said. “This show kind of gives you an overview of what we do at Nashville Ballet.”

The pieces are set up in what Vasterling said is an “opposite chronological order,” in which the first piece was created most recently, and each of the following pieces are older than the one before.

The show will begin with “The Ben Folds Project: Concerto,” which will be performed en pointe with choreography by Vasterling and music by Ben Folds. The piece was commissioned by the Nashville Ballet, the Nashville Symphony Association and the Minnesota Orchestra.

The first movement of “Western Symphony,” “Allegro,” will follow the opening piece. This piece will be performed en pointe and include both Apprentice and Festival Dancers from the Chautauqua School of Dance.

The next piece, which will be performed in ballet flats and is also choreographed by Vasterling, will be “Appalachian Spring.” Vasterling considers the piece fully American, not only because of the style and type of movements, but because of those involved in its creation.

“My friend Mitchell Korn observed the irony that a work of art that is considered quintessential Americana was created by a woman (Martha Graham), a gay Jewish man (Copland) and a Japanese designer (Isamu Noguchi),” Vasterling wrote in the program.

“‘Appalachian Spring’ is based in ballet, but in another way, it is a lot heavier than that,” Vasterling said.

The final piece, “Sechs Tänze,” is a 20th-century interpretation of music from the 18th century, according to Vasterling. It includes choreography by Kylián, a Czech dancer, and classical, well- known music by Mozart.

It is meant to be really funny and comic,” Vasterling said.

Vasterling said that he is excited for Nashville Ballet to perform at Chautauqua because of the values that permeate the community.

“What I loved about it, of course, was the dedication to arts and learning,” he said. “It is a really nice environment that is conducive to creativity.”

During the company’s one-week stay at Chautauqua, its members will be working with singer-songwriter Rhiannon Giddens on a new project titled “Lucy Negro, Redux” that will premiere in February in Nashville.

The piece is based on poetry by Caroline Randall Williams and explores the idea that the conceit of the “dark lady” in classic early modern English literature was an African-American woman.

“We are so excited and so grateful to (Vice President of Performing and Visual Arts) Deborah Sunya Moore, who has allowed us to come here and participate in this very valuable creative time,” Vasterling said.

Furthermore, Vasterling said the company is excited to perform with live music performed by the Chautauqua Symphony Orchestra and for the opportunity to reach a new audience.

“I always want us to get in front of other people and show people outside of Nashville the quality of our work,” Vasterling said. “I think our work really describes the human condition, and I think that will resonate with an audience like (Chautauqua).