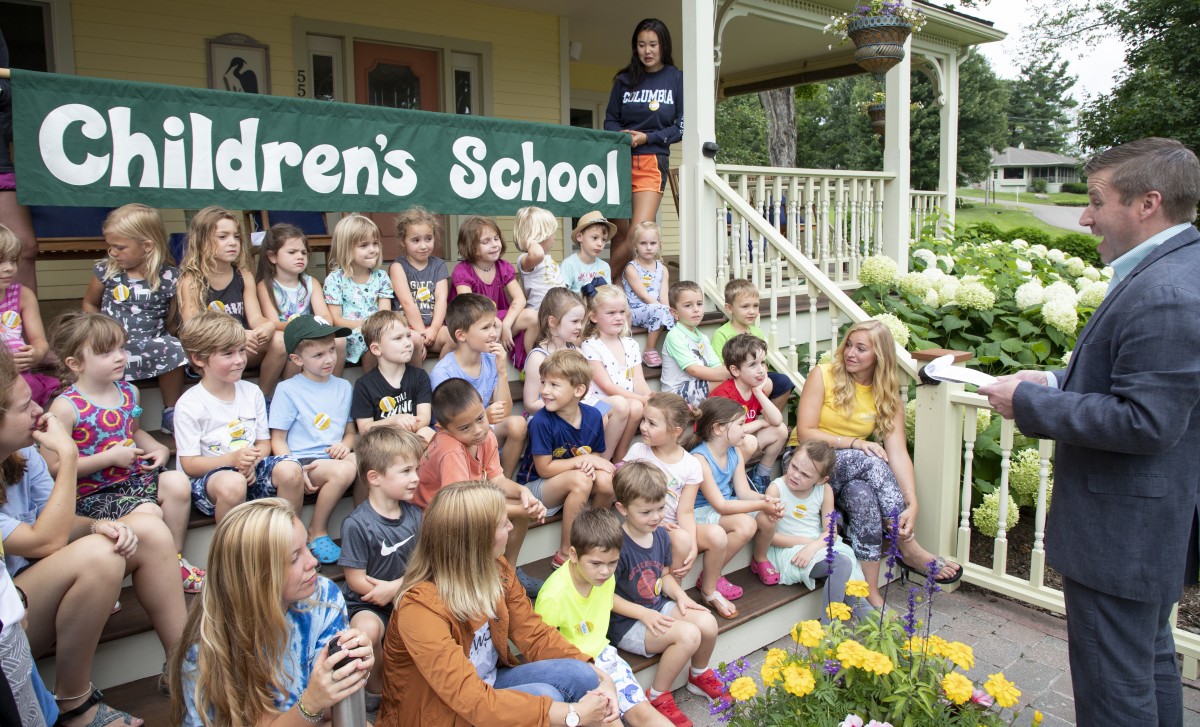 The Children's School Advisory Board, or the 5's, meet with President Michael Hill to suggest possible improvements to Chautauqua Institution Wednesday, August 1, 2018 on the porch of the President's Cottage. RILEY ROBINSON/STAFF PHOTOGRAPHER

President Michael E. Hill met with the sitting members of the Children’s School advisory board at 9:30 a.m. on Wednesday, Aug. 1.

The representatives gathered on the stone steps of the President’s Cottage to further discuss ways of improving Chautauqua Institution.

The meeting opened with the attendees venturing from their school to Hill’s abode. They marched to the Children’s School song and carried a banner with “Children’s School” written on it.

Once they settled in for the meeting, Children’s School attendees began the letter to Hill by sharing critiques and acknowledging some ideas from last year’s meeting that had not taken effect yet, including a zipline, increasing the bat population and a monster zoo.

“I have been working on (the monster zoo) for a year, and I still can’t figure out where to put it,” Hill said. “Should we put it at Children’s School?”

That motion was met with mixed reactions and has been tabled for the time being.

The board is currently satisfied with the toys at Children’s School and the butterfly population on the grounds, which it contributed to by releasing 10 monarchs over the course of the summer.

Quinn Kiley Jr., a vocal member of the board, commended Hill on bringing “Harry Potter and the Chamber of Secrets in Concert” to the Amphitheater. Quinn is currently reading the first Harry Potter book, but has seen the whole movie series. His favorite movie in the series is the last one, and he wants more of the films to come to Chautauqua.

“The last one was kind of scary and sad,” Quinn, 5, said. “But good because Voldemort died.”

Quinn also said a zoo would be a great addition to Chautauqua, and other representatives thought an amusement park would be fun, too.

Changing the color of the Chautauqua Belle was brought up, but the board could not settle on whether to paint it blue or purple. One person wanted to ban cars in Chautauqua, with the exception of packing and unpacking.

Hill liked the suggestion of building underground tunnels, which he said would be beneficial in the off-season when it rains and snows.

In regard to the Children’s School playground, the group thought a ferris wheel and rollercoaster would complement the slides and sandboxes.

All in all, the board just wants to make Chautauqua a good place to live.