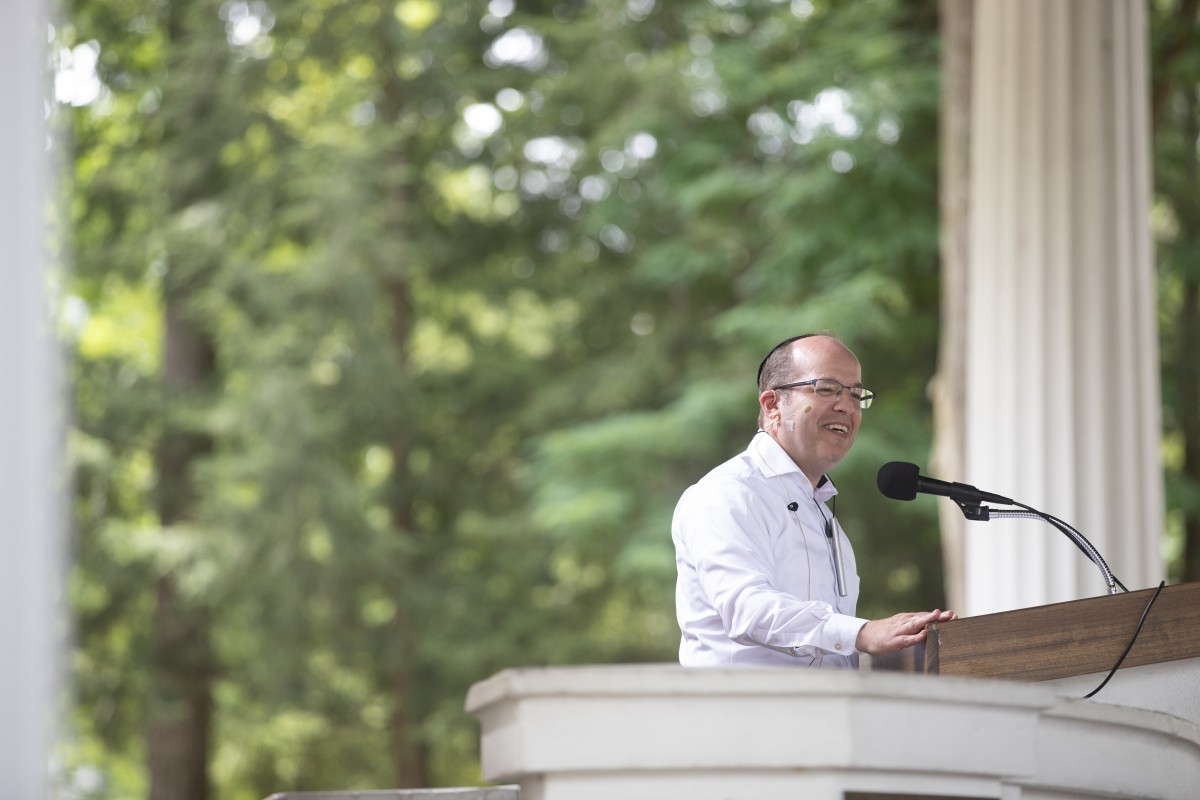 Rabbi Daniel Cohen, co-host of the syndicated radio show "The Rabbi and the Reverend" lectures Thursday, August 2, 2018 in the Hall of Philosophy. RILEY ROBINSON/STAFF PHOTOGRAPHER

A number of years ago, Rabbi Daniel Cohen met with Rudy Giuliani, former mayor of New York City, and posed an idea: What if Americans always lived as if it was Sept. 12, 2001?

At 2 p.m. Thursday, Aug. 2, in the Hall of Philosophy, Cohen, senior rabbi at Congregation Agudath Sholom in Stamford, Connecticut, and co- host of the radio show, “The Rabbi and the Reverend,” gave his lecture, “Leading a Life of Legacy: Finding Mission and Meaning in Every Moment,” as part of Week Six’s interfaith theme, “The Spirituality of Work.”

“No one wants to repeat Sept. 11, but on Sept. 12, we were able to transcend that partisan divide,” Cohen said. “We thought about what was truly important.”

The problem with those moments right after a tragedy is that their time frame is limited, Cohen said.

“Regardless of your faith, you feel you want to do more with life,” he said. “You focus not on what is urgent, but what is important, and then you are motivated for about 15 minutes until you get distracted again, until something comes up and you’re having another moment of awakening.”

Cohen had his own brush with tragedy when his mother passed suddenly from a brain aneurysm at 44 years old.

“In that moment, I learned that life can change in an instant,” he said. “We can’t take anything for granted.”

Once Cohen reached his 40s, he began to think about the kind of legacy he hopes to leave behind and started to write his book What Will They Say about You When You’re Gone? 7 Principles for Reverse Engineering Your Life.

The book starts with what it means “to identify our best selves,” Cohen said.

Cohen then shared three strategies to achieve the best version of one’s self: living inspired, courageous choices, and “Elijah moments.”

“Living inspired” is a phenomenon Cohen believes “everyone can relate to.”

At the beginning of the summer, people often have great plans, but by Labor Day when they’re asked, “How was your summer?” they always say, “It went by too fast.”

“The truth is, that is the nature of life,” he said.

“(‘McCartney disease’ is when) you ask people how they are doing, and all they can say is, ‘Yesterday, all my troubles seemed so far away,’ ” he said. “They are constantly filled with regret.”

“Annie disease” is the exact opposite.

“You ask (those) people how they are doing, and all they can say is, ‘Tomorrow, tomorrow, I will be happy tomorrow, but I am missing what is happening right now.’ ”

Cohen said it is important to understand that both ways of living are wrong and that although people can’t stop time, they can slow it down.

“We can turn fleeting moments into eternity if we are fully present in that particular moment,” he said.

The next strategy is called “courageous choices” and in creating it, Cohen took inspiration from Warren Buffet and King Solomon.

Buffet has the “20-5 rule,” meaning it takes 20 years to build a reputation and only five minutes to destroy it.

“I think we all can relate to that,” Cohen said. “Somebody can be working so hard and then in one false move, one bad choice, things come crumbling down.”

“Better to have a good name than all of the wealth in the world,” he said.

Cohen believes the ideology of these two men shows that it’s not the “big decisions, but the little choices we make” that have the most influence in one’s life.

“We are making choices every day,” he said. “Do we want to be remembered as givers or as takers? Do we get back to someone to answer? Do we help somebody or do we ignore them? Do we smile? Do we walk into our room and give our family our best?”

Cohen said although it is often a good thing to have a wide variety of choices, it can also cause someone to “spiral out of control.”

“One compromise leads to the next, and lives are ruined,” he said.

Cohen said the key to living a courageous life is knowing what one’s values are.

“If we know what our values are, then every time we have a choice that might not meet those values, we can look at the values and identify whether the decision fits it,” he said. “But if we don’t know who we are, then we sometimes make a negotiation based upon the highest bidder.”

Cohen believes these negotiations are dangerous because they affect not only the present, but also the future.

“It is the value of what we choose, and it is also understanding that what we do is not local, but reflects on our past and resonates into our future,” he said.

This strategy is based upon a phenomenon Cohen discovered at funerals called the “standing-room-only phenomenon.”

“You are at a funeral, and you’ll see there are people against the wall, and if you asked the deceased who that person is, they would say, ‘I have no idea who that person is,’ ” he said. “You ask the family, and they also don’t know, but they are there because (at one) moment in time, that person changed their life forever.”

Cohen decided to name it an “Elijah” moment based on a story by Baal Shem Tov, the founder of Hasidic Judaism.

A man went to Tov and asked to see Elijah the prophet. Tov told him to go to bring food to the widow’s house for the weekend and he will see Elijah. When the man never sees Elijah, he comes back to to see Tov, who tells him to keep going back to the widow for the rest of the week.

The man goes back and while he is in the forest, he hears a young child crying to his mother.

“The young child turns to the mother and says, ‘Mommy, where are we going to get food from for this Sabbath?’” Cohen said. “The mother turns to the child and said, ‘Just like Elijah came last week, Elijah is going to come again.’ ”

In that moment, the man realized he was the Elijah the widow was waiting for, Cohen said.

“In a world flooded with violence, let’s flood the world with acts of kindness,” he said.

Fogel came to the United States as a Holocaust refugee in the 1940s. He moved to Manhattan, New York, and worked in a fabric shop making ties.

“He was a person who would never take an extra thread, no matter what,” Cohen said. “A person who was filled with integrity.”

When the owner of the tie factory retired, he told Fogel he wanted to sell him the factory. When Fogel expressed he had no money to purchase it, a man from a nearby bank came to him and loaned him the money.

A few years after Fogel purchased the factory, a young buyer from Bloomingdale’s came in and said he was thinking of starting a tie line and had heard about Fogel’s reputation.

“As it turns out, this young man was none other than Ralph Lauren,” Cohen said.

As Cohen was sitting at Fogel’s funeral, Fogel’s son told him the story of how his father went through five concentration camps in Germany. In the 1940s, Fogel lost total hope and was planning to crawl to the electric fence. When he got there, a Nazi guard was standing in front of him. After making sure no one was around, the guard reached into his pocket and gave Fogel a sandwich.

“I started to cry in that moment,” Cohen said. “Here was an Elijah moment, one light in the darkest of hells in the world, and somehow this (guard) found it in himself to offer this bit of light to this man who then goes and gets married, has children, has grandchildren, his family is invested in their community, and it teaches us the value of a little bit of light to change not only our world, but the world around us.”

Cohen closed by asking the audience to utilize his three strategies and never wait for moments of crisis to apply them.

“It is true, there is a lot of difficulty in the world, a lot of darkness. But we never know, with one act you can change a world of despair into a world of hope, a world of sadness into a world of light — and God willing, we will experience a day very soon where every human being realizes that everybody has a divine spark within them, is created in the image of God and we will all lead lives of legacy now for how we want to be remembered.”