This summer, she is playing Judy in Jump as part of the New Play Workshops. She also opened the season as Grace in An Octoroon, for which Mitchell composed the show’s closing song. 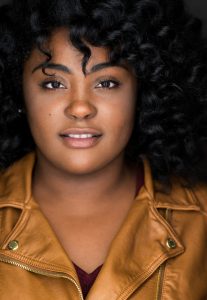 In addition to her work with CTC, Mitchell said she has been brainstorming ideas with conservatory actors Hannah Rose Caton, Janet Fiki and Jerrie Johnson for an episodic series.

“You always shoot for the stars,” Mitchell said. “I know it takes years to get your things on television, so if you can’t get there, then of course we’ll go to a web series, but we definitely want it to be filmed.”

Where she’s from: Mitchell was born and raised in Dallas, Texas, and just graduated from Penn State University’s MFA acting program. Mitchell said she was excited to reunite with other Nittany Lions at CTC this summer: conservatory actors Johnson, Elijah Jones and directing fellow Stori Ayers.

“Coming in with these three, I knew would be an experience,” Mitchell said. “I really am blessed to have a chance to get to know them better.”

First theatrical memory: Mitchell’s mother is a playwright and used to cast her children in educational plays that dealt with community issues, such as accidentally leaving kids in heated cars.

“It was an interesting way of speaking to her community, and we actually saw little steps of change that made her continue to write plays,” Mitchell said. “She would cast all three of us but would put me in the lead because I was the most expressive. I was really talkative in school and often got in trouble, … so she used my energy in a teaching, activism kind of way.”

Proudest theatrical moments: Mitchell said her favorite role while at Texas State University was a magical version of Medea.

“I had actual, physical powers, like the ability to choke someone across the room,” Mitchell said. “I had never seen a Medea with that type of power, so that was really fun to play with the lights and the sound, and I have some really cool pictures from that production.”

In graduate school, Mitchell played Olivia in Twelfth Night and Marie in Barbecue.

Special skills: Mitchell learned how to twirl a spear by playing Athena, the Greek goddess of war and wisdom.

What she’s watching: “The Handmaid’s Tale,” “Orange is the New Black” and “Steven Universe.”

What she’s listening to: Mitchell’s favorite artists right now are Emily Sonder and Cardi B.

What she’s wearing: Mitchell almost never leaves the house without three pieces of jewelry. She wears a ring with a cross that reminds her of faith and divinity, a locket that she hopes to fill with pictures of her late grandfather and his twin, and a Penn State alumni ring that was a gift from her aunt.

Q&A: Scenic design fellow Samuel Keamy-Minor wants to use more color in his work to expand his creative DNA