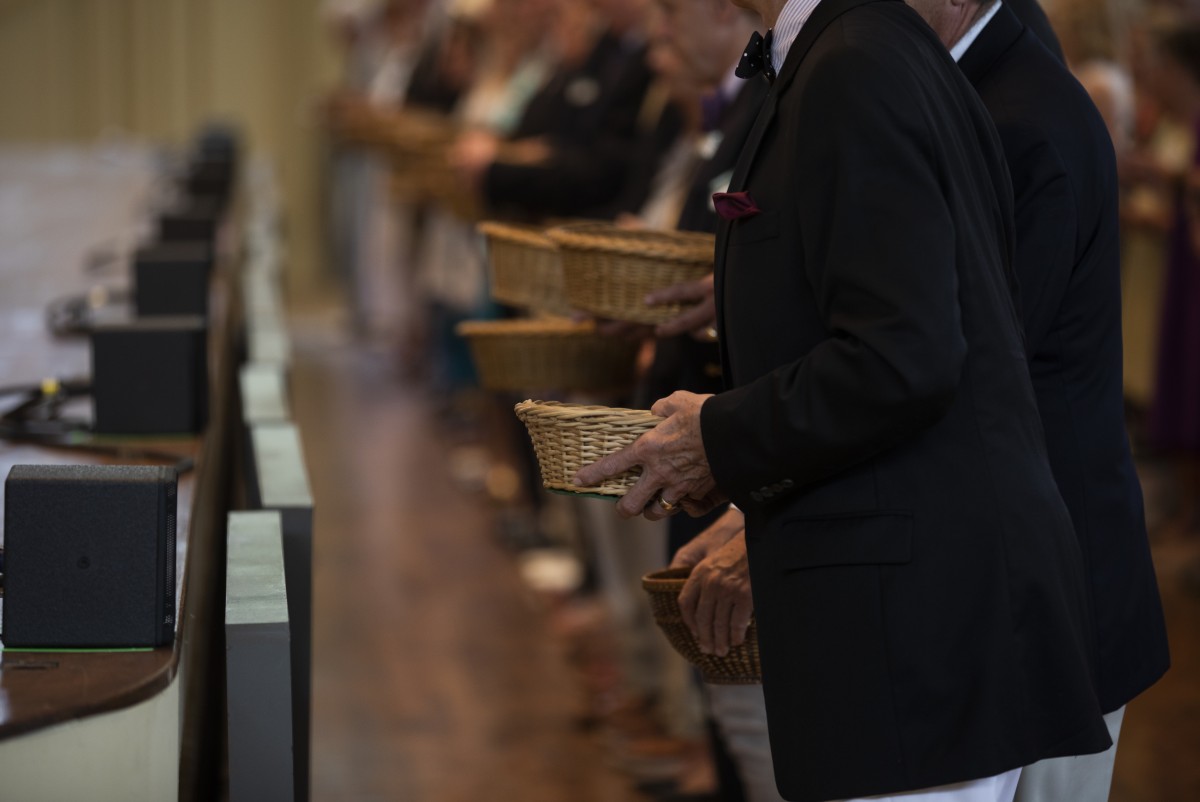 The ushers hold up the offerings for a blessing during the Sunday Morning Worship, Sunday, August 8, 2018, in the Amphitheater. BRIAN HAYES/STAFF PHOTOGRAPHER

The Bible is the source, the wellspring of untold numbers of art. It is the least-read bestseller in the world,” said the Rev. David Shirey.

He closed his week of preaching at the 9:15 a.m. Friday morning service of worship on Aug. 10, in the Amphitheater. His sermon title was “The Bible in 20 Minutes,” and the Scripture text was 2 Timothy 3:14-17.

Shirey said that his Bible has 1,151 pages, and “someone in the 18th century, with too much time on his hands, counted the words in the King James Bible. There are 774,746 words.”

As a pastor, Shirey has often been asked to give people “a ‘Keep it simple, stupid’ overview of the Bible.”

Some people have never read the Bible cover to cover, and others have made a path through it but have not translated it into their lives, he said.

Then Shirey took the congregation through a whirlwind tour of the English Bible.

People read through Genesis and Exodus because of the stories, but many get bogged down in Leviticus, a book about the Levites, the priests, and about worship.

“The title of Numbers in the Hebrew Bible is ‘In the Wilderness,’ and it has some good stories,” Shirey said. “Deuteronomy means the second law, Moses giving the law again as he did the first time in Exodus.”

Sometimes, Shirey said, the Pentateuch is referred to as the book of laws, but “that sounds harsh, like God has a radar gun to keep you from exceeding the sin limit. God is gracious, slow to anger and quick to bless.”

The next part of the Bible is history. These books include Joshua, Judges, Ruth, 1 and 2 Samuel, 1 and 2 Kings, 1 and 2 Chronicles, Ezra, Nehemiah and Esther.

“These books are a tapestry of names and places,” Shirey said, “but the thread that is woven throughout is that God is at work in history, working out God’s purposes with, without, and in spite of God’s people.”

God is still working with, without, and in spite of us.

The next section of the Bible is wisdom and poetry. Job is about the question of suffering, theodicy — and there is no answer to the question.

“Psalms are the hymnbook,” Shirey said. “They follow Job, not with an answer but a presence, not with an explanation but an incarnation.”

Proverbs are a Whitman’s Sampler chocolate box or a fortune cookie; pick one and try to live it. Ecclesiastes asks “What is the meaning of life?” and only in the last chapter provides hope.

“I hope we don’t have to wait to the last chapter of our lives to know that we are called to love God and love our neighbor,” Shirey said.

For many years, Shirey was a counselor at junior high camp. When it came time for lights out, he would tell the campers that they could read any book in the Bible but the Song of Solomon.

“That book is R-rated, and you are not old enough to read it,” he would tell them. Soon flash lights would go on under blankets as they tried to find it in the Bible.

“The Song of Solomon is a holy Valentine that will make you blush,” Shirey said.

Prophets, Shirey said, “are not prognosticators of the future; they have a lover’s quarrel with the church and the nation in the here and now. They are told by God to stand up and speak out until justice flows down like waters.”

There are prophets in present day, and nations still try to send them away, and churches still try to silence them, he said. Shirey did not include the Apocryphal/Deuterocanonical books in his survey and moved on to the New Testament. Matthew, Mark, Luke and John are not biographies but are great works of art that provide a glimpse of the glory of Christ’s majesty.

Acts of the Apostles is a history book about how the church grew.

“We are writing the 29th chapter now,” he said, “showing how people inspired by the Holy Spirit can make a difference.” The Epistles, 21 books in all, reflect the contact that Paul,

Peter, John and James had with churches in Turkey, Greece and Italy.

In Chapter 11 of the book of Hebrews, “we nd the Faith Hall of Fame.”

“We have a great cloud of witnesses who by their lives and example, we are still encouraged,” Shirey said.

The last letters from James, Peter, John and Jude are like handwritten letters from someone we cherish that we put in the top drawer and reread often, he said.

In the late first century, John, exiled on Patmos, has a vision called Revelation, the last book of the Bible.

“The soundtrack for this book would be ‘This Is My Father’s World,’” Shirey said, and then sang a verse. “It is a kaleidoscope that says goodness is stronger than evil.”

Theologian Martin Marty said that Revelation was written “to give hope and encouragement but it is used to scare people to death.”

Shirey said, “Stop it!” and a voice from the congregation said, “Yes!”

Shirey said that Revelation “is not ‘Last House on the Left,’ a horror movie, but a warm porch light to welcome you home.”

“These words, in our Bible, are trustworthy and true, to read, to reflect on and to live,” Shirey said. “And the last of these 774,746 words is amen.”

All will be well because God will ultimately triumph, the Rev. Robert Baggott says 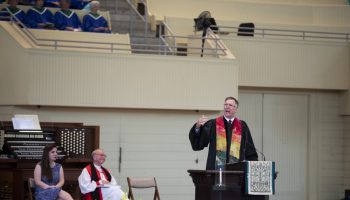 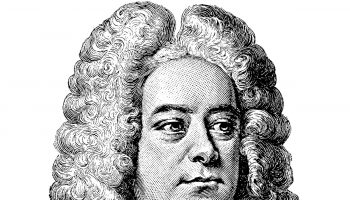