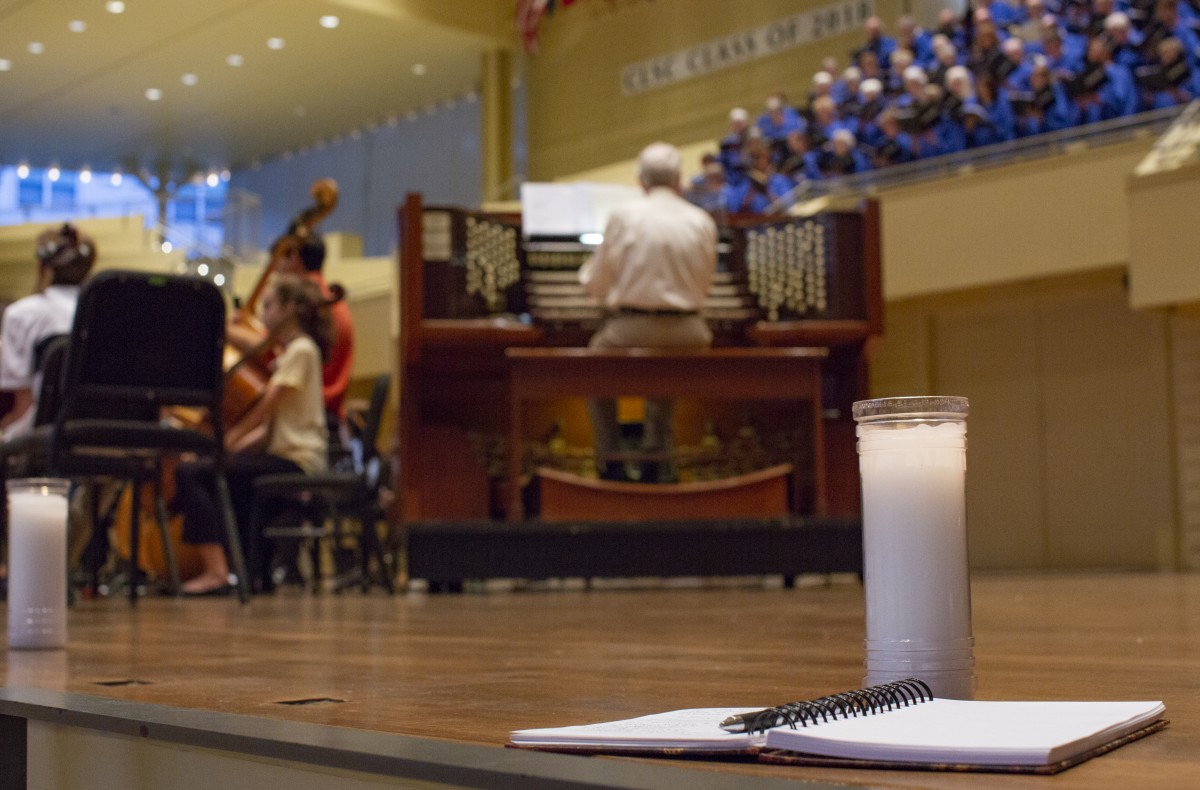 Members of the Chautauqua congregation were encouraged to write the names of those important to them in the "Books of Memory" during a special "In Remembrance" Sacred Song Service on Sunday, Aug. 12, 2018 in the Amphitheater. HALDAN KIRSCH/STAFF PHOTOGRAPHER

Amid the daily lectures, workshop classes and evening performances, Chautauquans often find little time to sit and detach, even for a few hours.

“When you get here, it’s like ‘go, go, go,’ and for Chautauquans to just sit on a Sunday night is very hard for them,” said Jared Jacobsen, the Institution’s organist and coordinator of worship and sacred music. “So during my Sacred Song Service, I get to authorize people to sit still for a moment or two and just relax.”

At 8 p.m. Sun., Aug. 19, in the Amphitheater, Jacobsen and the choir will encourage an evening of peace and reflection during the Sacred Song Service performance of “Holden Evening Prayer.”

Jacobsen said the “Holden Evening Prayer” is an ideal composition for a relaxing occasion.

“It’s a way to center yourself and get away from the rest of the world crowding in on you, just for a little bit, inside a protected space,” he said. “I wanted to expose Chautauquans to it who had never heard of the ‘Holden Evening Prayer.’ It’s very easy; you can pick it up in a snap. So it’s a way of putting you into a reflective state without being glued to a page of music.”

The “Holden Evening Prayer” was written in honor of Holden Village, an old copper mining town in the Cascade Mountains that was transformed into a community for arts and education — a community, Jacobsen said, much like Chautauqua.

“Who knows if it was modeled after Chautauqua, but it feels like it the more I read about it,” he said. “It has programs in the arts, education and lectures, and it’s technically run by the Evangelical (Lutheran) Church in America. In the summertime, it’s like Chautauqua. There’s a fair number of people there, and it’s a like a little spot of culture, education, spiritual development and retreat in the Cascade Mountains.”

The piece was written by composer Marty Haugen, who was the musician-in-residence at Holden Village from 1985 to 1986. Haugen’s composition includes four portions, beginning with the “Service of Light.”

“(The composition) starts as the skies are getting darker and the days are shortening and the sun is going down,” Jacobsen said. “The ‘Service of Light’ celebrates the light that we’ve had and looks forward to the next time the sun comes up.”

This piece is followed by “Psalmody, Readings and Canticles,” which Jacobsen said serves to unite the congregation in prayer and praise.

Right before the final blessing there is “Litany and Prayers,” a portion that gives the audience a chance to engage in a repeated prayer that Jacobsen said feels “automatic” and relaxed.

Though the service is simple, Jacobsen said it is the best way to begin the final week of the season. His hope is that choir and audience members are calm and inspired to begin their last week on the grounds.

“My choir has worked very hard this whole summer to do some complicated stuff, so they deserve to do some things where they can just sit back and relax,” he said. “I’m looking forward to this. My hope always is that people take stuff away from here.”