The 43rd annual Old First Night Run/Walk came and went with a blaze. The OFN course is 2.75 miles around the grounds. There were around 750 people signed up for the race, which took place Saturday, Aug. 4.

First-place finisher Tyler Clark has been participating in the OFN Run/Walk since he was 6 and has wanted to win ever since, he said. Clark won two years ago and said his victory was a “great accomplishment,” and winning this year was “another great feeling.”

He won with a margin of almost 30 seconds; the next closest finisher crossed the line at 15:01.

The top female runner was Rebecca King with a time of 17:27. King’s margin of victory was only 1.3 seconds.

“I was chasing down the runners in front of me the whole time,” King said. “I just caught them at the very end of the race.”

But not everyone ran the race to finish first. Colin “Tennessee” Bevis “joggled” the entire race and only dropped his juggling balls four times. He finished with a time of 21:31. In the male 20-29 division, Bevis finished fourth.

One day while juggling in a field, Bevis started running while juggling. “I (thought I) created a new sport, which was naive of me,” Bevis said.

Joggling was created in 1975 by Bill Giduz.

Bevis learned how to juggle from Don Rapp at Boys’ and Girls’ Club many years ago.

“I want to inspire other people. Rapp and I are trying to encourage others to do it,” Bevis said. “There’s five or six other kids that are really great, and I would like to see someone break my record.”

On Bevis’ playlist was Cardi B’s song “I Like That.”

Bevis hopes to continue participating in the race.

“The race means a great deal to me,” Bevis said. “I hope I can do for years to come.”

“It’s a challenge every year, but we are glad to have done it,” Susan Laubach said. “This is special, and we always come back.”

There was also a OFN Run/Walk “Around the World,” where runners and walkers registered online and had T-shirts shipped to them. These participants ran or walked 2.75 miles wherever they were and then sent in their results and pictures to Sports Club.

“I’ve seen a couple in Denmark and a women in Japan complete the race,” said Dana Lyons, coordinator of the race. 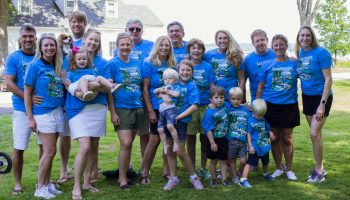 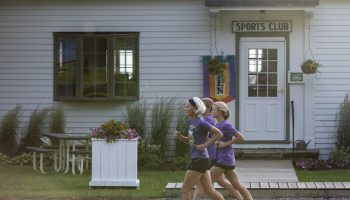 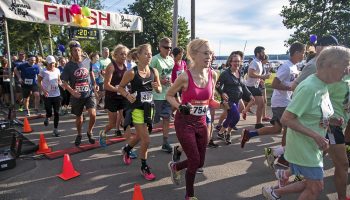