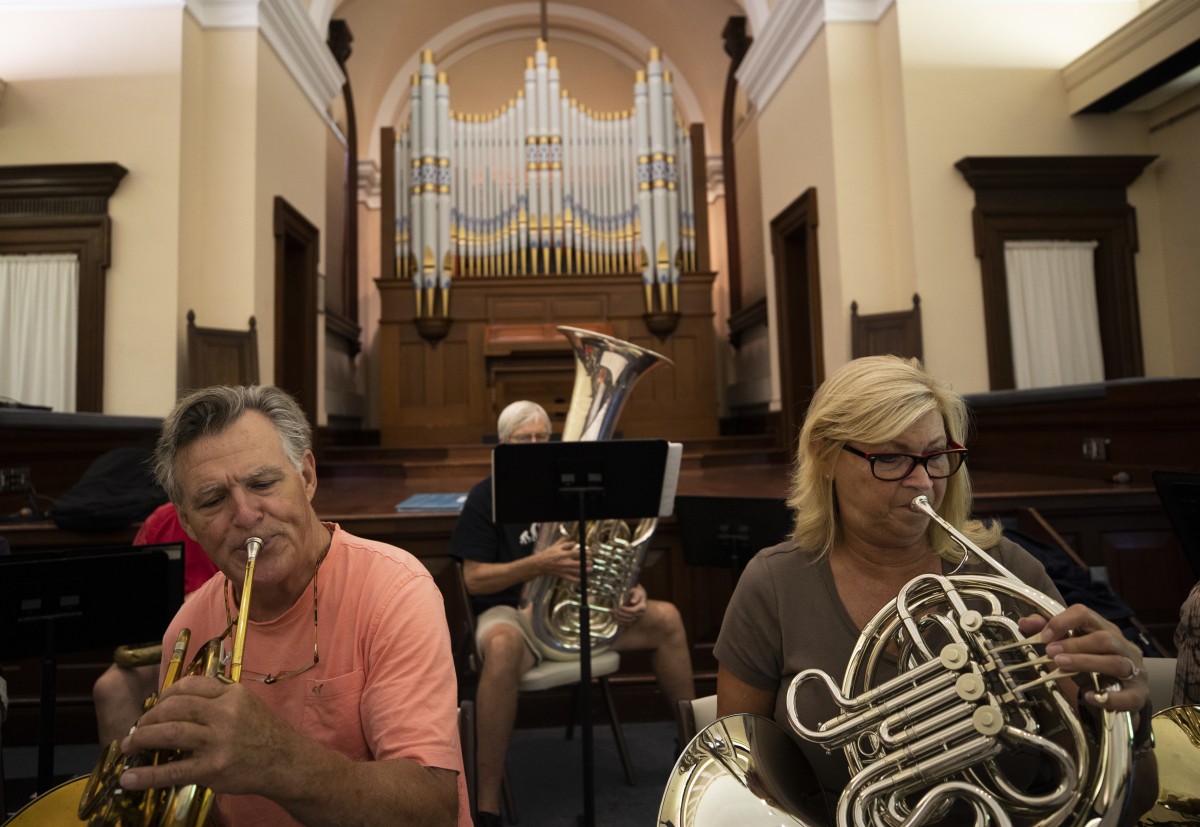 John Gerber and Nancy Larson play the French horn during a rehearsal for the Thursday Morning Brass concert to raise scholarship funds, Thursday, Aug. 9, 2018, in the Hall of Christ. BRIAN HAYES/STAFF PHOTOGRAPHER

At 4 p.m. Thurs., Aug. 16, in Elizabeth S. Lenna Hall, Thursday Morning Brass will be performing its final concert of the season. The group was an outgrowth of the Chautauqua Community Band in 1998 and falls under the umbrella of the Chautauqua Amateur Musicians Program. Thursday Morning Brass rehearses every Thursday morning in the Hall of Christ and performs several times throughout the summer.

The group consists of retired musicians and other longtime Chautauquans who have made music their hobby for any number of years. They do not get paid for any of their performances, yet continue to get together every season because of their shared common interest: playing music. For their concert this afternoon, members will perform a variety of music in different genres, according to Charlie Tea, coordinator of C.A.M.P.

“We tend to play a mixture of all kinds of music,” Tea said. “We’ll be doing the Vaughan Williams English folk songs. … We’ll probably be doing about 10 or 11 numbers.”

Larry Katz, music director of Thursday Morning Brass, said the group will dip into jazz, folk and different genres during its concert. He said the members want to play fun songs for the community.

While Thursday Morning Brass consists of musicians who do not perform for a paycheck, the group raises money every season that is donated to the Chautauqua Fund and used as a scholarship for a student in the Music School Festival Orchestra. This year’s recipient of the annual C.A.M.P. scholarship is Zongxi Li, a trombone player from Qingdao, China, who attends the University of Michigan.

“(Thursday Morning Brass) was originally started by Dr. Joe Prezio,” Katz said. “He met some of (the current members) in the Community Band and talked to us about starting a little group. … (There were) maybe five or six of us at the time.”

The group went on to grow to about 15 members, comprised of musicians who play the trumpet, tuba and other instruments. Many participants, like Katz, are also active in the Chautauqua Community Band, as well as in symphony orchestras in their hometowns.

Katz said he and the other members came together because of their love for music and their love of Chautauqua.

“We feel that we are making a contribution to Chautauqua as a society and as a culture,” he said.