When Dan Habib’s son Samuel was diagnosed with cerebral palsy, he was just 12 months old. Now, Samuel Habib is almost 19, recently attended senior prom and is a high school graduate.

Part of Samuel Habib’s journey was chronicled through his father’s first film, “Including Samuel,” which was nominated for an Emmy Award.

“After three years of work, ‘Including Samuel’ became my first film,” said Dan Habib, a filmmaker at the University of New Hampshire’s Institute on Disability. “That film just took off. It’s now been translated into 17 languages and it’s used all over the world as a catalyst for inclusive education. It launched me on this whole new career of filmmaking.” 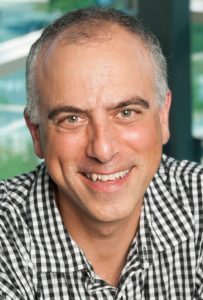 At 2 p.m. Thursday, Aug. 23, in the Hall of Philosophy, Habib will share his experience making films about disability awareness during his lecture, “Disabling Segregation.” Habib’s lecture is part of the Week Nine interfaith theme, “The Intersection of Cinema and Religious Values.”

Before Habib was a filmmaker, he worked full-time as a photojournalist and was the photo editor for the Concord Monitor in New Hampshire. His freelance work has appeared in Time and The New York Times, and he is a six-time New Hampshire photographer of the year.

Even with numerous accolades for photography, Habib said he feels a deeper connection to filmmaking.

“I loved being a photojournalist, but I always felt like I never completely experienced the impact of my work,” said Habib, a 2012 recipient the New Hampshire National Education Association’s Champion of Human and Civil Rights Award. “But now I can show a film at an event like Chautauqua, and immediately, I’m having really deep conversations with people about how they’ve navigated disability. There’s something about film that creates this shared experience when you watch it with a group and talk about it, and that can really move people to create change.”

Habib said he is inspired by those who watch his films and are motivated to facilitate positive change. But the driving force behind his work, he said, is his son.

“Every piece of work I do is motivated by my role as the parent of Samuel,” he said. “It’s very easy to stay motivated and focused because I feel such passion growing out of my experience as a father.”

At Chautauqua, Habib will share his personal experiences with his son and how it has shaped his filmmaking. But ultimately, he hopes the lecture will inspire Chautauquans to think about disability rights in a larger context.

At 4 p.m. Thursday, Aug. 23, at Chautauqua Cinema, Habib will premiere his most recent film, “Intelligent Lives.” The film chronicles the experiences of three individuals, all with disabilities, as they navigate educational and professional spheres. There will be a talkback with Habib following the screening.

Habib said the goal of “Intelligent Lives” is for audiences to question what defines intelligence.

“One of the big challenges with this film was to get people to see intelligence in a much more broad way,” he said. “We wanted to blow up the notion that there’s any one way to measure intelligence, whether it’s through IQ scores or SAT tests. That’s a very limiting way to see intelligence when it comes to people that express themselves differently, like through art or social and emotional intelligence.”

The film is different from Habib’s previous work, yet it still serves as a catalyst for his goal — to create complete inclusion for those with disabilities.

Though this lecture marks Habib’s first visit to Chautauqua, he is a longtime friend of the Rt. Rev. V. Gene Robinson, Chautauqua’s vice president of religion.

“Gene Robinson and I go back at least 20 years,” Habib said. “We lived only some miles away from each other in New Hampshire, and I covered his ordination. Gene has been a longtime supporter of my work, even before I was doing disability.”