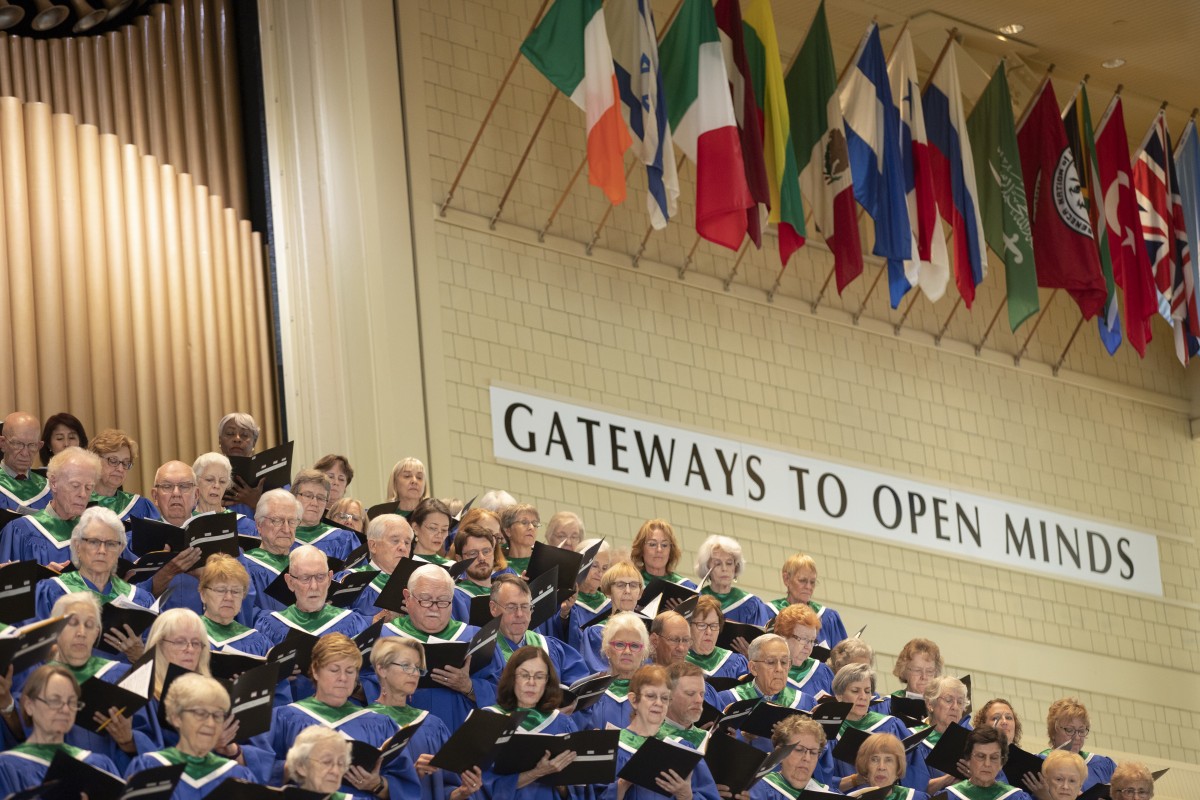 “I have noticed that America is angry. That is why I titled my sermon ‘Jesus Cussed and So Do I,’ ” said the Rev. Irene Monroe at the 9:15 a.m. Fri., Aug. 17, morning worship service in the Amphitheater.

The Scripture text was Matthew 21:12-17, Jesus challenging the rules of the temple.

Monroe began her sermon with a shout-out to two special people. One was Daniel Karslake, a lifelong Chautauquan and producer of “For the Bible Tells Me So.” She met him while she was studying at Harvard and Karslake was interviewing the Rev. Peter Gomes.

She said her spouse was also jealous that Monroe was in the same place as the Rev. Jesse Jackson, “who epitomizes the old hymn ‘I have been running for Jesus for a long time, but I ain’t got tired yet.’ ” His motto, she said, is “keep hope alive.”

Many people are losing hope today.

“We are so divided that we can’t talk across our differences; we can’t engage in civil discourse,” she said.

“I want us to look at this text in a new way. It gets used as a non-apology for online rants,” Monroe said. “As a country, I think we are imploding and I am despondent about what to do.”

She told her spouse that she will be aging into the country she was born in — Jim Crow America.

“I do have some escapes,” she said. “I read romance novels, watch reruns of ‘A Different World’ and I try not to eat too much — but have you tried Ben & Jerry’s ice cream flavor Stephen Colbert’s Americone Dream?”

With Friday’s text, she said, she wanted to give the congregation a charge to go into the world.

Monroe said folks have told her she is angry.

“I hope you will see me differently and will hear what I have to say,” she said. “I am here to educate, to be a mirror for you and to move you in the direction to have the language for messy conversations.”

Chautauqua, she said, is a controlled environment to help this happen so that people can go out into the world.

Scholars have several views of the story of Jesus in the temple. Some, she said, say he had a “temple tantrum. The brother lost his righteous mind.”

Others say Jesus was cleansing the temple in an attempt to reform the laws of the temple.

“I see righteous anger,” she said. “Jesus was courageously confronting injustice. He was a nonviolent revolutionary, but he was not passive.”

“He was a nuisance, a troublemaker, a pain in the ass,” she said. “Truth-tellers are problematic people.”

“He was active, provocative, daring and dangerous. He was a one-man crime wave in the Roman Empire,” Monroe said.

Monroe had three questions for the congregation: What is righteous anger, who embodies it today and what does it look like?

“Righteous anger,” she said, “is holy discontent. Where injustice to people exists, the anger is directed at the injustice and not the people.”

The anger is wrapped in love, not revenge. The anger is under control and leads to constructive activism and gives rise to activists.

African-Americans come out of a tradition of righteous anger that has sustained them through hard times, she said. It has helped them make a way out of no way — through slavery, Jim Crow and the civil rights movement.

Rosa Parks used righteous anger when she refused to give up her seat to a white man, and to fight against the systemic rape of women.

“God is love and God is justice,” Monroe said. “I can rise up each morning knowing that.”

There are two songs the civil rights movement adopted to sustain itself — “We Shall Overcome” and “We Shall Not Be Moved.”

Monroe said King was a nonviolent revolutionary who got in the face of the Alabama government. She told the congregation that we have to tell the truth and shame the devil.

“Nobody liked King in his day,” she said. “He was considered the most dangerous man in America because he had a huge movement behind him.”

Most Americans did not support the March on Washington in 1963, and when King spoke out against the Vietnam War, Monroe said, he lost favor with President Lyndon Johnson.

Today, we have streets named after King and a national holiday celebrating him.

Monroe said King’s dream was to see “justice roll down like waters and righteousness like an ever-flowing stream.”

“Righteous anger is about the Beloved Community,” Monroe said. “Go out in the community and turn the tables around. If you are angry about the direction of this country, then do something.”

If you are angry and you don’t do anything, she said, you can’t talk about the way the country is going.

“United we stand,” she said, “divided we fall. That is our moral and spiritual challenge.”

“Be a thermostat,” she said. “We will fight until hell freezes over and then we will fight on the ice. Remember the power of the people is greater than the people of power.”

The congregation gave her a standing ovation.

The Rev. Natalie Hansen presided. Mark Altschuler, who first came to Chautauqua to be the sports writer for The Chautauquan Daily and teaches English at Bergen Community College in New Jersey, read the Scripture. The Chautauqua Music Camp Orchestra performed the preludes. A group of percussionists with tambourines were scattered on the floor of the Amphitheater and played “Rhythmic Ceremonial Ritual” by Zachary Cairns. The whole orchestra played the first movement of Eine Kleine Nachtmusik, by Wolfgang Amadeus Mozart under the direction of Edward Leonard. The Motet Choir and the Music Camp orchestra, under the direction of Leonard, performed “Pavane,” by Gabriel Fauré. Jared Jacobsen, organist and coordinator of worship and sacred music, provided accompaniment on the organ. The Samuel M. and Mary E. Hazlett Memorial Fund and the John William Tyrrell Endowment for Religion provided support for this week’s services.