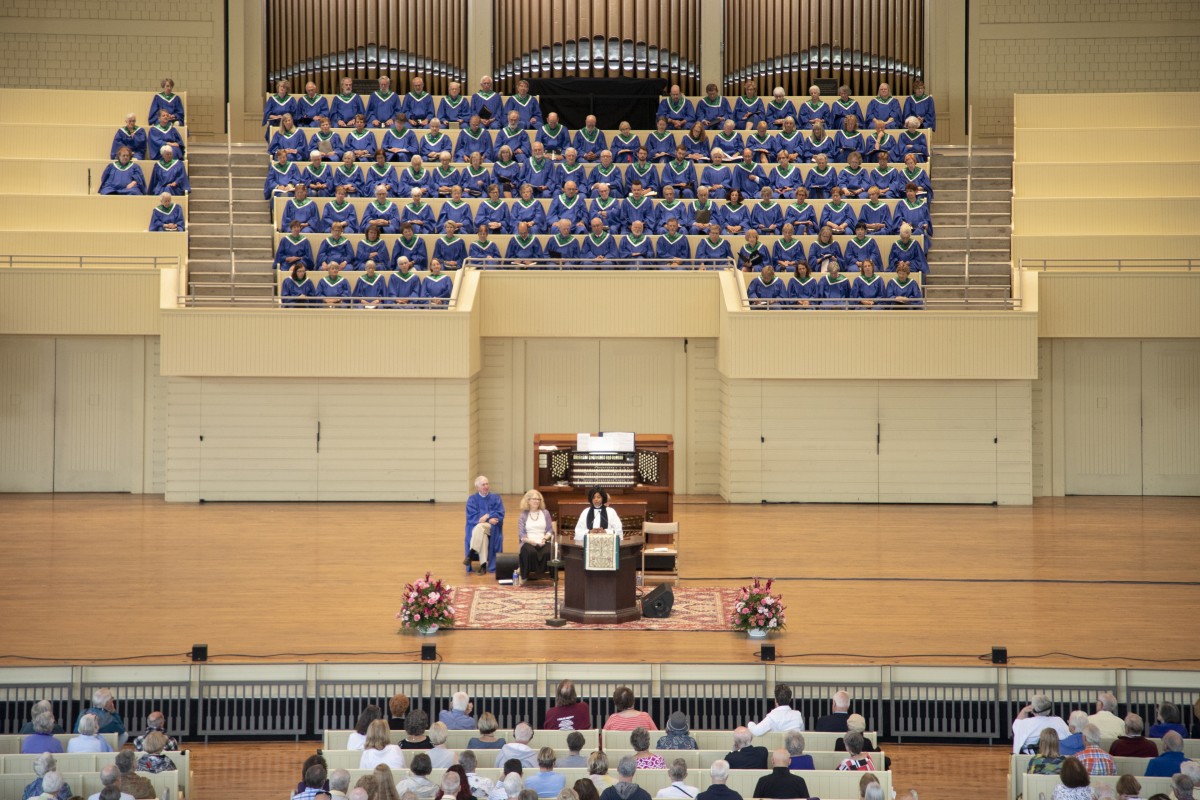 “I must give credit where credit is due; it is the Roman Catholic sisters who have done the best work on the Magnificat,” said the Rev. Winnie Varghese at the 9:15 a.m. Tuesday morning worship service in the Amphitheater on Aug. 21.

“And if you think that these sisters are meek and mild, think again,” she said.

Varghese’s sermon title was “The Songs of Our Humiliation,” and the Scripture text was Luke 1:46-55, the Magnificat.

When she was rector of St. Mark’s Church-In-The-Bowery, the congregation used “Canticle of the Turning” during Advent.

“Canticle of the Turning” is a contemporary rendition of the Magnificat, by Rory Cooney, set to a traditional Irish tune, “Star of the County Down.”

Varghese said the first verse. “My soul cries out with a joyful shout/ that the God of my heart is great,/ And my spirit sings of the wondrous things that you bring to the one who waits.”

There was a common adage at St. Mark’s that “though I am small, my God, my all,/ you work great things in me.”

The people of St. Mark’s would go to the local farmer’s market to buy food for the hungry so that “the hungry poor shall weep no more,/ for the food they can never earn; /These are tables spread, ev’ry mouth be fed,/ for the world is about to turn.”

Varghese was asked to be a worship leader for a conference of Episcopal bishops.

“These are mostly white guys, good guys, and some women,” she said. “St. Mark’s is very eclectic, with no clear majority. It is hard to feel out of place when you are the only one like yourself.”

The bishops are not quite so visibly diverse, she said, “but God bless those who are called to be a leader of the church.”

When, in the service, the congregation got to the “Canticle of the Turning,” one of the bishops took the lead. The more he led, the louder and stronger the hymn became.

“He took a lilting Irish tune and turned it into a battle march,” Varghese said. “It got louder and louder until it could have ended in a cannon blast.”

This, she said, is how a song of freedom becomes a song of conquest, with its strong beat and volume of singing.

The “Canticle of the Turning” is “a song of aspiration, of the heart and tenderness,” she said.

In the Magnificat, Mary praises God because he sees her lowliness. Mary claims her dignity for herself, which is revolutionary.

Varghese said that the Magnificat has a long history of being banned in some political situations. Its call for earthly power to be brought down is not subtle.

It was banned in India during British rule, in Guatemala in the 1980s, and by the Argentine junta in the 1970s and ’80s.

Singing the Magnificat is a must at Episcopal evensong services.

“It is emblematic of the Episcopal church. It is hard to think about banning a part of the Bible used in prayer,” Varghese said. “We can be textual literalists when it is convenient.”

Martin Luther, she said, in his German translation of the Bible, left the Magnificat in Latin because the German princes “took a dim view of the mighty being brought down.”

Varghese was part of a service at Union Theological Seminary in New York in the fall of 2014, after Michael Brown was shot in Ferguson, Missouri.

Union has sent out generations of activists, she said.

“Believers in every generation at Union know the world is changing and want to be a part of the change,” Varghese said.

The James Chapel at the seminary was filled. Some of the students had been in Ferguson. Some had heard stories similar to Brown’s all their lives about family, friends and neighbors.

Varghese had expected quiet restraint, but people wept loudly during the service.

At one point, she said she wished a black, Pentecostal preacher would fill the room with powerful words. Then a young black man got up, walked toward one of the pillars in the chapel, and began a low wail.

“It was the deep moan of Mary and the women with tears that called down the hand of God for comfort,” Varghese said.

The principalities and powers are still at work today, Varghese said. In November 2014, a jury decided not to indict the police officer who shot Brown.

“My daughter was home from school and we watched the news,” Varghese said. “All Manhattan wailed.”

Varghese sent a text message to the people of St. Mark’s that they would meet at the church the next morning.

They took one of their Easter banners, a bolt of white cloth, took it out in front of the church and Varghese’s daughter, an art major, helped to block out a banner that said “Black Lives Matter.”

There were plenty of people to help, so one of the young black men who was there said he would go help the other churches with their banners. He came back several hours later, confused that St. Mark’s seemed to be the only church making a banner.

The banner was 24 feet long and 3 feet high. They hung it from the historic fence at the church with grommets and zip ties.

St. Mark’s is on the corner of East 10th Street and Second Avenue in Manhattan — a big, public intersection.

The next morning, the banner was gone. No one saw a thing.

“We were put back in our place,” Varghese said. “The sign was so dangerous that the city could not tolerate the banner for 24 hours.”

Mary’s song, the Magnificat, is a wail so deep we try to turn away, she said. It was a recognition of the life children like hers would have in the empire.

Varghese ended her sermon by quoting the “Canticle of the Turning”: “For the dawn draws near,/ And the world is about to turn.”

The Rev. Virginia Carr presided. Bill Waterston, a retired Baptist minister who served American Baptist churches as a magazine editor, director of radio and television ministry, and a child care executive, read the Scripture. The Motet Choir, under the direction of Jared Jacobsen, organist and coordinator of worship and sacred music, sang “Alleluia” from “Brazilian Psalm” by Jean Berger. The Mr. and Mrs. William Uhler Follansbee Memorial Chaplaincy and the Daney-Holden Memorial Fund provide support for this week’s services.