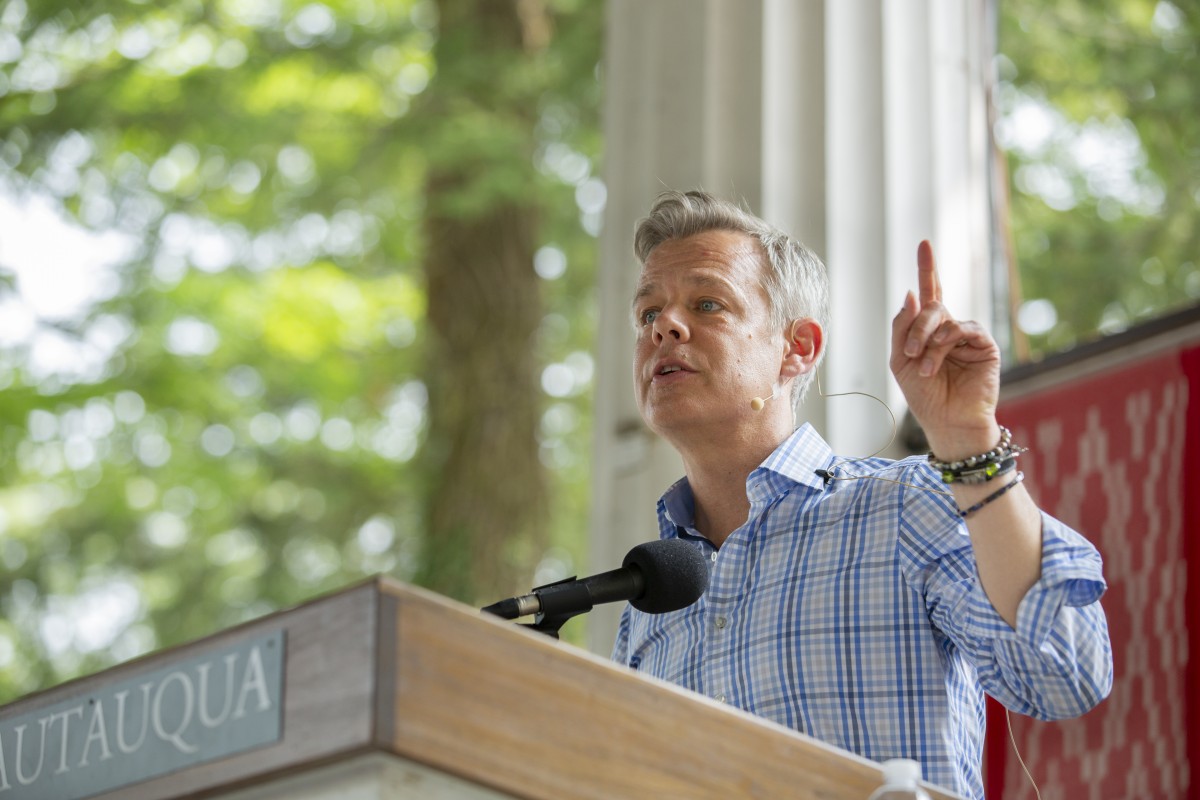 According to Daniel Karslake, he won “the birth lottery.”

His parents told him that road would lead him to the Chautauqua Bookstore, where he could get his daily dose of bubblegum. He made that trip a thousand times, walking the same route as the “parade of thinkers” who spoke while he was growing up. Those people shaped him as a person and inspired him to do what he does now: make films.

At 2 p.m. Monday in the Hall of Philosophy, Karslake opened Week Nine’s interfaith theme, “The Intersection of Cinema and Religious Values.” He spoke from the podium, where so many of the people who inspired him stood, about how his time as a Chautauquan influenced the documentary films he has made, including “For The Bible Tells Me So” and “Every Three Seconds.”

Karslake said there are two fundamental beliefs he got from Chautauqua. One is that anything is possible, and the other is from Luke 12:48: “From everyone who has been given much, much will be demanded.”

With those two principles in mind, Karslake has been drawn to make films about religion. He just finished a documentary about the Middle East, which he said heavily features religion.

“(Religion’s) power in our society,” Karslake said, “its ability to elevate us and make us the best people we can be, but also its propensity to separate and dominate, is also very, very interesting to me.”

Karslake’s films deal with different aspects of social justice. “For The Bible Tells Me So” is a film about five religious families whose children are gay, and “Every Three Seconds” highlights poverty and hunger around the world.

“I was born in an amazing country. I am a white male, (and) much comes with that is extremely positive. And I was created gay, which is one of the great gifts of my life because if I were just a Caucasian male, I would not understand, like I understand, what it’s like to be a minority — at least to a certain extent,” said Karslake, who lives in Berlin with his husband, his partner of 26 years. “That is a huge gift. I understand what it’s like to be tolerated, or looked down on and judged.”

Karslake came up with the idea for “For The Bible Tells Me So” after working on the PBS series “In the Life,” in which LGBTQ individuals talk about their experiences. On the show, Karslake explored the intersection of religion and homosexuality for the first time.

For his episode of “In the Life,” Karslake talked to the Rev. Irene Monroe, who was the Week Eight chaplain-in-residence at Chautauqua. At the time, she was studying at Harvard Divinity School. Monroe describes herself as an African-American, “street theologian lesbian.”

“I loved that message because as someone who grew up Christian who was also gay, I was very conscious of what I felt Christians thought of who I was, and that they thought it was based in the Bible,” Karslake said. “But here was this woman at Harvard, who was in the streets talking both about her faith and the fact that she was a lesbian.”

Karslake shaped that episode to be a profile on Monroe, but he added commentary from her professor, the Rev. Peter Gomes, author of The Good Book, about his interpretation of homosexuality in the Bible.

The day after that episode of “In the Life” aired, Karslake had about 70 emails from people all over the world waiting in his inbox. One was from a 13-year-old boy from Iowa. The message was only a few lines, and read: “Last week I bought the gun. Yesterday I wrote the note. Last night I happened to see your show on PBS, and just knowing that someday, somewhere I might be able to go back into a church with my head held high, I dropped the gun in the river. My mom never has to know.”

“Getting that email really seared into my soul,” Karslake said.

In 2003, Karslake bought a movie ticket to see “Bowling For Columbine.” While watching the film, he found himself enthralled in the format of the documentary. “In the Life” was only reaching about 1 million people a month, and Karslake wanted to grow his audience. At that point, “Bowling for Columbine” reached more than 10 million in its opening weekend, Karslake said.

It was during that screening he decided to make a documentary about parents of faith who find out they have a gay or lesbian child. The documentary follows the families and captures the moments following the revelation.

“(The subject matter would be) families who are able to hold onto their faith and embrace their child, because in the late ’90s, early 2000s, that was thought to be as completely mutually exclusive,” Karslake said. “You could either stay in your Baptist church or embrace your child, but you couldn’t do both. And I, in my core, do not believe that is true.”

At the time he started making his movie, the Rt. Rev. V. Gene Robinson, now the vice president of religion and Chautauqua’s senior pastor, was elected as the first openly gay bishop in Christendom.

Karslake wanted Robinson to be in his documentary, but the security surrounding Robinson was tight. At the time, Robinson was getting more death threats than the president of the United States, but Robinson agreed to be in the movie, which opened lines of communication with other potential subjects.

“It’s really because of Gene that the film got made,” Karslake said.

It took Karslake four years to raise funding and make “For the Bible Tells Me So,” and it finally premiered at the Sundance Film Festival in 2007. It has since beentranslated into more than 20 languages, premiered in Tokyo in December 2017, has been shown in more than 4,000 churches and is the focus of two Bible studies.

“I grew up relatively convinced that Christians hated me,” Karslake said. “That is the word I always came to. But boy, did I find out I am wrong.”

Karslake’s second film was inspired by a 2005 lecture he heard in the Amphitheater. Karslake was visiting his family when the Rev. Jim Wallis came to Chautauqua and gave a sermon titled “We Are the Ones We’ve Been Waiting For.”

“These are the opening lines: ‘Every three seconds, somebody dies somewhere in the world from hunger or extreme poverty. Usually it’s a child, and usually it’s from a preventable disease,’ ” Karslake said. “That blew my mind. That meant 30,000 people were dying, and usually children, from things we’ve solved, in the developing world.”

Karslake left the Amp that day “on fire,” he said. He knew someone needed to do something about it. After “For The Bible Tells Me So” opened, Karslake spent time researching the poverty and hunger, and he wanted to be part of the solution.

Up until that point, there was a hopelessness surrounding world hunger, Karslake said. The UNICEF commercials persuaded people into contributing, but made it seem like world hunger would never be solved.

During a residency at Stanford University, Karslake was able to find a quiet place to map out “Every Three Seconds,” which took six years to make.

Before making “Every Three Seconds,” Karslake thought he knew what hunger was. He always thought hunger was a problem that existed outside the United States.

When Karslake started filming in Malawi, Kenya and the Congo, he thought seeing people who were hungry and impoverished would be devastating because he is an empathetic and emotional person. The opposite was true.

Every house Karslake went to, the people would offer him food out of their week’s rations. He would try to say no, but the residents always insisted. That’s when he realized there were two types of hunger.

“I came back understanding that world hunger really does cover the globe. There are two kinds of hunger: there’s hunger … where’s there’s not enough food or basic medical care, but there’s this other hunger, where ‘I live for bigger, better, newer, faster,’ that’s killing the planet,” Karslake said. “It’s killing our oceans. It’s taking our natural resources, and that is the much more dangerous hunger. So what a gift that has been to know that and to learn that.”

Karslake is currently working on a follow-up to “For The Bible Tells Me So.” He never anticipated revisiting the crossover of religion and LGBTQ issues, but when he started getting death threats again a few years ago, he gave it a second thought.

Karslake and his husband had been living in Berlin for a couple of years and were out of touch with what was happening in the United States. After receiving threats, they heard a contentious election was taking place, and decided to tune into a Republican debate.

“During that debate, I heard out of eight or nine of them things I had not heard publicly said by a politician in years,” Karslake said.

During Salt Lake City screenings of “For the Bible Tells Me So,” Mormon men would stand up and say how moved they were by the movie, but were curious as to why no one of their faith was featured in the film. Karslake has always remembered those men, and that, coupled with the political climate, made him certain he wanted to make a documentary similar to his first.

This upcoming film will feature two people who are transgender, one Mormon story, a Catholic story and a deeply devout evangelical couple who put their child in conversion therapy for six years.

Through it all, Karslake’s journey traces back to the time he has spent at Chautauqua.

“I truly believe that I am the luckiest person I have ever met, mostly because of my base here at Chautauqua,” Karslake said. “And the thing that I’ve really come to know, and I learned it here, is that it’s not so much my duty to want to make a world that works. It’s not our responsibility. That’s not what’s it’s about. It’s my great privilege to do that. It’s my great blessing and what gives my life incredible meaning, separate from my family and my friends. It’s trying to find a way to that world that works for everyone.”