Madeline L’Engle’s A Wrinkle in Time isn’t a brand new story. It was a classic time-traveling science fantasy novel published in 1962, which won the Newbery Medal.

Illustrator and cartoonist Hope Larson adapted L’Engle’s story into a graphic novel in 2012. A Wrinkle in Time: The Graphic Novel is the CLSC Young Readers selection for Week Nine. 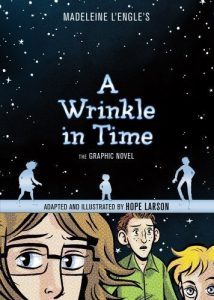 Artist Leslie Calimeri, the former digital communications manager at Chautauqua Institution who opened her own gallery in Lakewood last winter, will lead the Young Readers activity at 12:30 p.m. Wednesday, Aug. 22, in the classroom at Smith Memorial Library.

Graphic novels, in general, present a different way of telling a story — capturing the visual representation of what Young Readers are reading, according to Karen Schiavone, manager of Special Studies and youth programs.

“There’s a different appreciation for seeing a story in pictures, I think, with A Wrinkle In Time especially,” Schiavone said. “I’ve always loved A Wrinkle In Time. It’s one of my favorite books, probably the first sci-fi fantasy book I’ve ever read in my life. It’s stuck with me. (It’s) such a classic story about love in the purest form — love between siblings.”

When A Wrinkle in Time: The Graphic Novel came out, Schiavone said she immediately thought this would be a good opportunity to introduce a whole new generation of kids to the book she loved as a child.

With the visual help from Larson’s illustrations, Schiavone said, readers are able to see things “drawn out;” before they could only imagine things based on the original text — for example, what Aunt Beast looks like.

“(In) a science fiction fantasy book, these things that you’ve been able to imagine in your head are now portrayed in Hope Larson’s imagery, which is really exciting, seeing some of things I’ve only imagined as a child — this is what someone else is putting into images. And it takes it out of your own head, and puts it onto the page.”

Schiavone said all readers create a picture in their heads when reading a book, and Larson is no exception. She had these childhood imaginations as well.

In “An Interview with Hope Larson” at the end of the book, Larson said “the way I pictured some of the characters — especially Meg — was the result of my own childhood imagination, not the descriptions actually in the book.”

Week Nine’s theme, “Documentary Film as Facilitator: Storytelling, Influence and Civil Discourse,” centers on film, and Schiavone’s way of connecting A Wrinkle in Time: The Graphic Novel to the theme is thinking about how much harder it is to tell a story in a limited format.

“When you think about your favorite book that was turned into a movie, for example, it’s never translated quite exactly the way you remembered it in your first reading of the book. It’s always a little bit hindered by the the two-hour movie runtime,” Schiavone said. “The same thing can be true of a graphic novel.”

There are also merits with the format of graphic novel, Calimeri said. First of all, “it appeals to a larger audience.”

“Someone who might not be interested or be inclined to read a full traditional novel may want to  read a graphic novel. … It’s a different way of telling a story,” Calimeri said. “It picks up on nuances with the visual elements that (in) traditional text, you might glaze over and not fully experience it. You can use lighting and shading and dramatic spacing to really convey the energy and (what) the character might be either feeling or experiencing physically.”

Illustration also helps children understand the many complicated characters in A Wrinkle in Time, Calimeri said.

“Some of the characters are very complicated, and they can be hard to understand the first time (reading) through, especially Charles Wallace, for example,” Calimeri said. “… I think seeing his thoughts and actions illustrated on page gives you a different level of understanding of that character.”

Schiavone said the character development is done very well throughout the graphic novel. For example, readers are able to see Meg’s mother’s strengths, weaknesses and motivations, even though the readers don’t see much of Meg’s mother’s presence in the book.

Schiavone also sees A Wrinkle In Time: The Graphic Novel as “a really good reminder that everybody has different talents.”

And in Meg’s case, Schiavone said, she might seem to be “a little bit of a dork.”

“(Meg) thinks she struggles at school, but she’s really, really, really good at math. She’s exceptionally smart,” Schiavone said. “She sees a lot of her traits as shortcomings when in fact, they are talents. In the end, she realizes that because of her unique set of gifts — and they are gifts — she realizes she is the one who can save her brother. And at the end of the day, love triumphs over evil.”