Last weekend, the Chautauqua Foundation Board of Directors hosted its annual dinner in the Athenaeum Hotel. During the dinner, past and present directors and current members of the Chautauqua Institution Board of Trustees gathered to celebrate the start of a new season.

“It’s always been one of my favorite nights to start off the new season because it’s a really strong community,” said Karen Goodell, vice chair of the Foundation board of directors. “(These are) volunteers who are really thoughtful and caring about Chautauqua Institution — I feel like so many of them have given so much of themselves and their treasure and their time.”

Goodell said that she finds pleasure in being in the company of her fellow volunteers. She appreciates how dedicated the members of the boards are and how much they care about the community.

Opening remarks were delivered by Cathy Bonner, chair of the Chautauqua Foundation Board of Directors, who acknowledged former directors, current directors and Institution trustees. There was also a special welcome for Tim Renjilian, current co-chair of the Chautauqua Fund and the new chair-elect of the Foundation board, as well as Candy Maxwell, chair-elect of the Institution’s board of trustees.

Bonner is the first woman to serve as chair of the Foundation board of directors. She has held her position as chair for four years and will no longer serve on the board when her term ends in August. Bonner was taken by surprise when she was then honored at the dinner.

“It was such a lovely tribute,” Bonner said. “Totally unexpected.”

In honor of Bonner’s accomplishments and service, and for her efforts with the garden restoration of the Miller Edison Cottage, Goodell took to the podium to announce that two pink dogwood trees were planted in front of the cottage.

“They have pink flowers and you can see them blooming all over Chautauqua right now,” she said. “It was an incredible honor they dedicated to me and the work that we did on the cottage.”

To end the night, the Chautauqua Theater Company performed a special excerpt from A Midsummer’s Night Dream. Goodell particularly enjoyed the performance because of Bonner’s love of theater.

“To have the theater company come and honor her, in front of her peers,” Goodell said, “it’s just so Chautauqua-esque.” 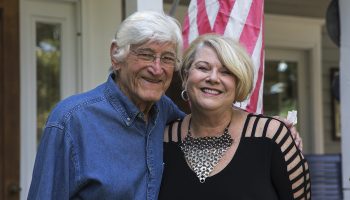