About a minute into his keynote address for the 2019 Writers’ Festival, poet Jericho Brown began to sing.

Punctuating a speech about the cathartic, entangled nature of joy and poetry with references to T.S. Eliot and Octavia E. Butler, Brown sang excerpts from negro spirituals, filling the parlour of the Athenaeum Hotel with his steady voice.

The Writers’ Festival team — which includes Atom Atkinson, director of literary arts at Chautauqua Institution, and Writers’ Festival Director Lillian-Yvonne Bertram — chose “Writing and Reclamation” as this year’s theme in part because it was a consistent topic during the 2018 festival. By pivoting from last year’s theme “Writing in Times of Crisis,” Atkinson wanted programming to adopt an optimistic tone.

“It is a theme that is implicitly more loaded with positive potential, as well as being cognizant of what is at stake,” they said.

As Brown stood at the podium on Thursday, June 20, he spoke of the way writing allows him to be hyper-aware of himself while simultaneously allowing a necessary distance.

“Anything can become material when used to make the gorgeous and enduring thing,” Brown said. “The only joy I have in writing about domestic violence is the opportunity to reenvision and reform memories that otherwise leave me inoperable and in tears. Writing the poem is how we face the terror while working to separate ourselves from that same terror.”

Brown’s third collection of poems, The Tradition, is about claiming the traditions — southern, black, queer — that often refuse him.

“I have several subjectivities in one body, several identities in one body, and there are folk of those traditions that would say I don’t belong in those communities, but I do,” Brown said. “Reclamation for me is understanding that we come with history and that all of this history is indeed valid.”

While conversations about reclamation drove the festival’s content, accessibility informed behind-the-scenes efforts. Recognizing that the dearth of busses and trains in the area skewed their potential audience, Atkinson and Bertram organized shuttles to ferry attendees to and from Buffalo at the beginning and end of the festival.

To better ensure that the festival remains truly inclusive, they also recruited Megan Stielstra, a 2018 Week Three prose writer-in-residence, to facilitate a community workshop aimed to establish codes of conduct and create a space for sharing anxieties.

“Among the challenges we face is that we want this to feel like a distinct and necessary event in the minds of those who have been to a lot of retreats and conferences, but we also want to reduce the intimidation factor for folks who are entering this space for the first time,” Atkinson said.

“We really wanted to imagine what a four-day community can be.”

Local Area Students Get Introduced to VACI Exhibitions at the Institution

Charter for Compassion Returns to Chautauqua

Writers-in-residence Luisa A. Igloria and Jeffrey DeShell to read works with diverse origins 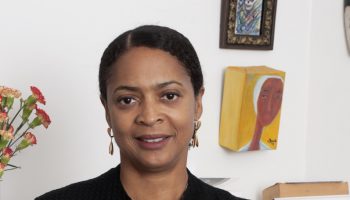